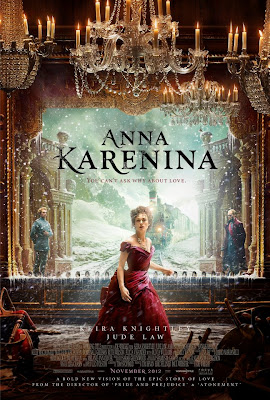 Ok, so now I am just getting rather busy during this holiday season, so again, along with one more post, I have decided to give an abbreviated review for Anna Karenina.

Based on the 1877 novel by Russian author Leo Tolstoy, Anna Karenina is the latest adaptation of what has been listed on several instances as, "The Greatest Novel Ever Written."  Set in late-19th-century Russia high-society, the married aristocrat Anna Karenina (Keira Knightley) enters into a life-changing affair with the affluent Count Vronsky (Aaron Taylor-Johnson), which causes many problems for all associated, which of course includes Anna's current husband, Alexi Karenin (Jude Law).  As the affair continues to have an impact on the high-society setting that all these characters find themselves in, Anna questions her happiness, as change comes to her family, friends, and community.

I was intrigued to see this, based on it being director Joe Wright and Keira Knightley teaming up again to make this movie.  They had previously worked together on Pride and Predjudice and Atonement together and I am quite fond of Wright's incorporation of style, so it made me more excited than I thought I would be to see an adaptation of a Leo Tolstoy novel.  So with that said, it's unfortunate that for all the great work involving production design, costumes, and the novel approach to the structure of the film itself, which is in reference to the fact that nearly the entire film is contained inside of a single theater, I still did not come away liking the film.  The reason is due to the fact that the style may have been great, but the substance did not quite feel 'there'.  I thought most of the performances were quite good, but I never felt like the film was able to ever fully engage me, which is not a great thing for a 2 hour+ film.  I was also irritated by Johnson's performance, who I feel did not capture what Vronsky was supposed to be effectively enough for me to truly care about him as a desirable person for multiple characters.  So on the whole, as good as I did find Knightley to be in this film, I never felt the the characters were truly explored well enough, with more time spent on the film's production.  With all of that said though, I did admire the score by Dario Marianelli, who previously won an Oscar for Atonement.  Lots of great sights and sounds, just not enough to have kept me captivated. 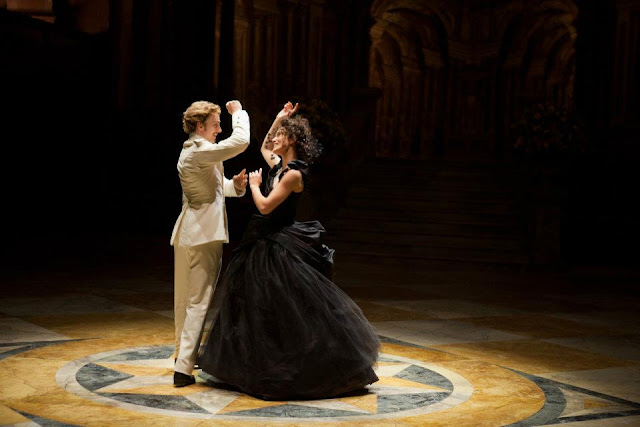