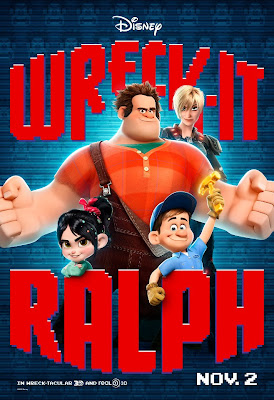 
Wreck-It Ralph:  It's hard to love your job, when no one else seems to like you for doing it.

So here is another 2012 movie that seems to be tailored for me to really enjoy it.  As ParaNorman delivered a fun zombie movie in a stop-motion world (with dramatic arcs and solid messages as a bonus) and Seven Psychopaths delivered on my love for darkly humorous hit man comedies (with dramatic arcs and a humorously meta touch as a bonus), Wreck-It Ralph is an ode to video gaming (with dramatic arcs and tons of geeky references as a bonus).  The film does not necessarily break away from the classic Disney formula and the humor may not necessarily be so much timeless as it is very deliberately skewed towards people that grew up with various types of video games, but it is incredibly entertaining on multiple levels and another great-looking feature from Disney’s animation studio.

The story is fairly ingenious (think Toy Story meets Monsters Inc.), in the world of Wreck-It Ralph, video game characters have lives outside of the games.  When they are not involved in their respective arcade games, they have communities they live in and a central game hub they can all visit.  Wreck-It Ralph (voiced by John C. Reilly) is the villain character in his arcade game, Fix-It Felix Jr. (think Donkey Kong).  Ralph has been destroying the same building in his game for 30 years and not really receiving much respect, while Fix-It Felix (Jack McBrayer) receives all the acclaim for fixing everything.  This has made him grow tired of being the villain.  Despite attempting to deal with his feeling through a video game villain support group, Ralph decides he wants to explore new options and try to be the hero elsewhere.

As Ralph leaves his own game, he manages to enter into Hero’s Duty, a light-gun shooter game, where he is tasked with fighting as a space marine, led by the fierce Sergeant Calhoun (Jane Lynch).  Ralph is a bit put off by the intensity in this game and eventually finds himself in Sugar Rush, a kart racing game, where the levels and karts all resemble various forms of sweets.  It is here that Ralph meets one of the game’s characters, Vanellope von Scheweetz (Sarah Silverman), who appears to be an outsider in her own game.  Eventually, the two of them team up in hopes of getting what they want and possibly turning Ralph into the hero he’s always wanted to be.

The arc of this story is all very familiar, which is not necessarily something that harms the film, but it is clear that it is coming from a template that Disney has utilized a lot in the past.  The difference this time is that it has a fresh coating of video game humor all over it, in addition to strong vocal performances and characterizations of the lead characters.  Regardless of whether or not I had an idea of how Ralph’s journey was going to end up, I really cared about him, as well as Venellope.  The story reaches moments where, sure, it would be a much more interesting film if certain decisions were made instead of others, but the fact that it adheres to a proven formula only goes to show that the formula still works, and works even more so when the people involved are delivering on so many other areas as well.


Wreck-It Ralph:  When did video games get so violent?  It's scary out here!

Wreck-It Ralph comes from director Rich Moore, who is a Simpsons veteran and clearly accustomed to geek humor.  The influence that he and his credited writers, Jennifer Lee and Phil Johnston, had on this film clearly portrayed the minds of people who are very familiar with video games and know the kinds of the things that resonate with gamers, particularly those who are aware of the early days of coin-op arcade games.  I can only imagine that I would pick up even more references on subsequent viewings, but on first watch, one can see tons of different characters, items, icons, and other visual jokes, that all go to paying tribute to video games from multiple decades (the final frame of this film, after the credits, has one of the geekiest arcade jokes possible).  It is certainly great to see and I’ll mention the animation in a bit, but the only possible downside is that I am not sure how well a lot of these jokes will be appreciated in times to come.  It prays on nostalgia for sure and while it does not fit into the lesser animated DreamWorks film habit of putting in pop culture jokes from a short time ago, I can see jokes in Wreck-It Ralph going over the heads of a lot of people in the times to come (and for younger audiences currently).

With that said, why Wreck-It Ralph succeeds is because of the strength of the story being told, the fact that is still really funny because of the voice cast involved, and because of the stunning animation.  Regardless of what qualities separate Pixar, DreamWorks, and even Sony Animation, this Disney film looks fantastic, with a wonderful use of colors and a variety of designs that really make this film excel.  Along with brining classic video game characters to life and representing certain classic video and arcade game settings, the animation direction, on the whole is vibrant and stunning in many cases, with unique worlds and characters that fit well with the attitude of the film.

Now, having addressed the animation and worlds, the only other nagging issue I have is the fact that there was less game jumping than I would have hoped for, which I also think will surprise others.  The majority of the film is set in Sugar Rush, and while it is a unique-looking world, I would have liked to see more.  This also applies to a lot of the jokes in the film, which start to be taken over by candy and sweets-related humor and less in the way of video game humor.  It is not enough to betray the spirit of the film, but one does start to notice, as the second act does drag a bit.

Small issues aside, Wreck-It Ralph is a highly enjoyable animated feature that manages to utilize its premise for the better, especially when dealing humor that resonates with the nostalgic audience that sought out the film.  Fitting alongside films like Scott Pilgrim vs. The World, Tron, or even (and especially) The King of Kong, as films that delivers on being among the best films about video games, as opposed to being ones based on video games, it works because it has the ability to both cater to a certain audience, but also deliver in the way of story and characters, which is what should matter in almost all films anyway.  Beyond the basis for the humor, it may not be bringing anything new, but it is certainly entertaining in many of the right ways.


Clyde:  Let’s finish with the bad guy affirmation.
Bad Guys:  I am bad and that’s good.  I will never be good and that’s not bad.  There is no one I would rather be than me.