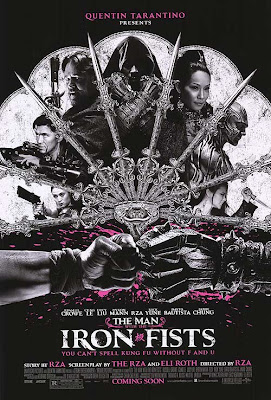 
The Blacksmith: When you forge a weapon, you need three things: the right metal, temperatures over fourteen hundred degrees, and someone who wants to kill.  Here in this village, we got all three.

The Man with the Iron Fists is the movie that The RZA (pronounced Rih-Zah) has always wanted to make and a film that people would likely expect from him.  It is a martial arts epic infused with hip-hop that pays loving tribute to the Shaw Brothers era of Kung Fu movies, with a mix of modern day sensibilities.  I have been guilty in the past of not appreciating similar and recent films like Ninja Assassin and The Warrior’s Way, but The Man with the Iron Fists just hit me the write way I guess.  The film is incredibly silly from its plot to its casting, but it has the kind of energy that I was able to get into and fits into this grindhouse mold that Quentin Tarantino (presenter of the film) and Eli Roth (co-writer and producer) have been trying to popularize as of late.  It also has an expected, awesome soundtrack and score. 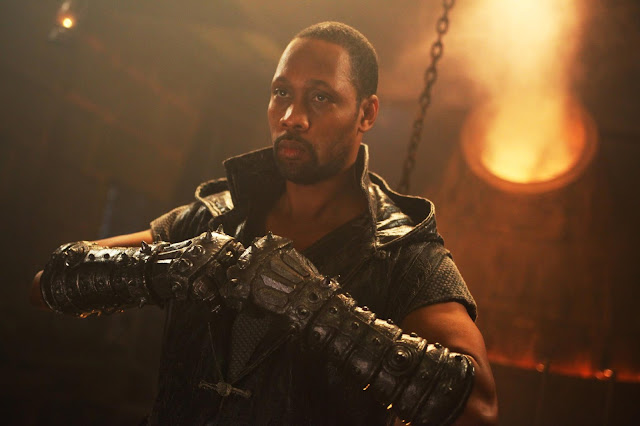 The premise is simple and inconsequential, but lays enough ground to get to the copious amounts of action.  Set in 19th century China, in a place called Jungle Village, a number of different groups of warriors and assassins, some good and some evil, all descend on a brothel for an eventual showdown.  Among these people is Jack Knife (Russell Crowe), an opium addict who has his own shady reasons for staying in the village.  The X-Blade (Rick Yune), son of a murdered clan leader, who is looking for revenge.  Silver and Bronze Lion (Byron Mann and Cung Le), the murderers of their clan leader, who are seeking a large shipment of gold.  Brass Body (David Bautista), an invulnerable mercenary.  Madam Blossom (Lucy Liu), the owner of the Pink Blossom brothel.  And the humble blacksmith (RZA), who is forced to make weapons for the new arrivals in the village, but simply wishes to leave, with his girlfriend from the brothel, Lady Silk (Jamie Chung), by his side.  What follows are various sequences that lead to large scale fights between everyone, with the good guys in this equation hoping to protect their community.

I am a big fan of RZA, from his work with Wu-Tang, to his work as a film score composer and soundtrack producer (Ghost Dog: Way of the Samurai is a favorite soundtrack/score of mine), to his emerging career as an actor (the guy can be really funny or effective in small supporting roles).  Given that he wrote, scored, directed, and starred in this film, it comes as no surprise that not every part of this worked out for the best.  That said, RZA is able to pull off the trick of having a film that is a lot of fun to watch, as it is directed well enough, boasts numerous entertaining action sequences, sounds great, and has some wonderfully cheesy dialogue.  RZA’s writing and acting may not be the strongest aspects of this film, but it has enough going on elsewhere. 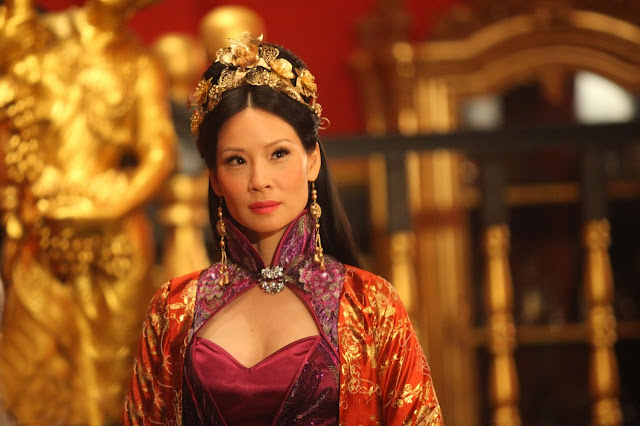 From what I have learned about the film, enough footage was shot to make a four hour movie, or even a possible two-parter.  Given that this idea was (rightly) rejected, much to the chagrin of RZA (who still seems to be pleased with the results), I can tell that there is a lot missing in terms of the story structure and characters we meet.  I will definitely be curious about possible plans for a director’s cut, but given how the film has been truncated, I was pleased that the pacing is pretty quick for this film and still presents a decently entertaining story, given how it is fittingly campy and still manages to pay tribute to so many martial arts and Kung Fu films from the past.

In terms of the films that inspired this one, RZA has always made people aware of his love for The 36th Chamber of Shaolin (a favorite of mine as well), which has inspired the Wu-Tang Clan’s formation to an extent, and the fact that he has that film’s star, Gordan Liu, to cameo in this film speaks to the fact that RZA wanted to make the best film he could.  This is further emphasized by everyone he got to work with him on his film.  Fight direction was handled by Corey Yuen (decades of experience), cinematography from Chi Ying Chan, and editing by Joe D’Augustine (who worked with Tarantino on Kill Bill).  Given that RZA is making his first film, he managed to surround himself with a great crew to help him out and it pays off. 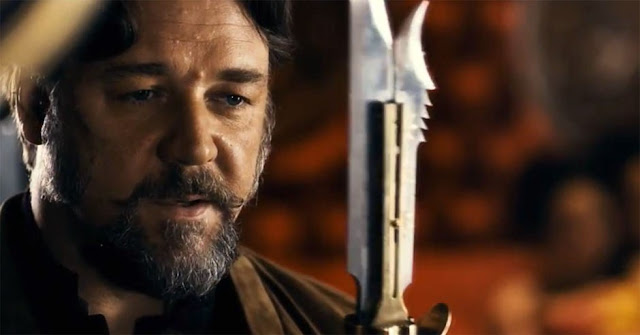 The action is a lot of fun in this movie.  It is very stylish, with plenty of ‘Wire Fu’ in play, but it looks great and the R-rated nature of the film lets The Man with the Iron Fists be more creative than weaker efforts going for the same thing.  It is because of this style and the tone of the film in general that you can mix some elaborate and real-looking fights with something like a man with iron fists and a man with a body made of brass pummeling the hell out of each other and still have the movie work.  The added bonus is that the film, separated from its action, looks great.  Production and costume design work all go a long way in setting up a fully realized universe for these characters to exist in.

Jack Knife:  I always bring a gun to a knife fight.

Speaking of the characters, not that a whole lot of ‘acting’ is required, but everyone involved really does fit in well.  Byron Mann, in particular, as the evil Silver Lion, was a lot of fun to watch, as he delivered on the action and villainous nature of his character.  But of course, many will talk about Russell Crowe’s turn as Jack Knife.  It is a lot of fun to see Crowe sink his teeth into scenery and it seems very apparent that he was aware of exactly what movie he was in.  Lucy Liu is reliably suited to this sort of film as well, dialing it back from her O-ren Ishii character in Kill Bill, but still having fun as well.  I also enjoyed ex-wrestler David Bautista as the assassin Brass Body, as he was imposing in the right way.  The weakest work actually came from Rick Yune and RZA.  To me, Yune has always been terrible in films (see The Fast and the Furious and Die Another Day), but RZA, while effective in some scenes, played a lot of the film too stoic in a lot of instances, given the manic energy that surrounded him.  I see that he’s trying to be very Clint Eastwood here; it’s just not a highlight until he starts rocking the iron fists.

Lastly, I must of course reference the soundtrack and score for this film and commend how well handled it is.  RZA and composer Howard Drossin put together a wonderfully fitting score for this film, which infuses the tones of hip-hop and kung fu movies, along with the occasional dalliance into spaghetti western territory.  Add to that an entire soundtrack (only a few of the tracks are featured in the film), which helps to further emphasize the blending of cultures and you have something that continues to bring out the fun intentions of this film as a whole.

The Man with the Iron Fists is a film for genre fans, Kung Fu cinema fans, and of course those who know that Wu-Tang is forever.  It is of course silly and over-the-top, but it can also be really enjoyable for the right audience, especially since it is well filmed, quick-paced, exciting, and over before wearing out its welcome.  I will be curious if RZA will be afforded the opportunity to make more films, given that he has gotten his feet wet and could only do better or if he is simply set on having made the film he has basically always dreamed of.  Regardless, this is a great example of escapist fun with an undercurrent of respect for the genre.

Madame Blossom: Gentlemen, warriors, we'll see who's left standing and who's on their knees... 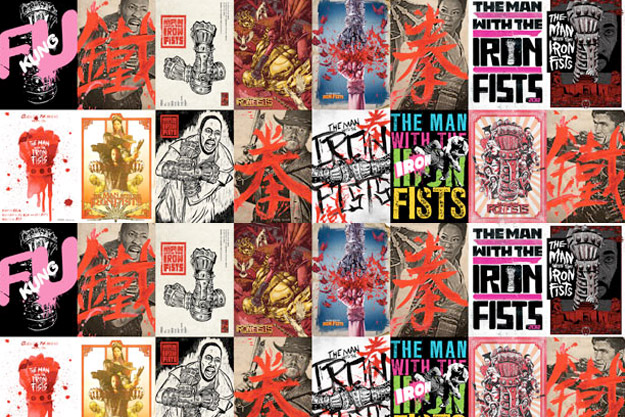 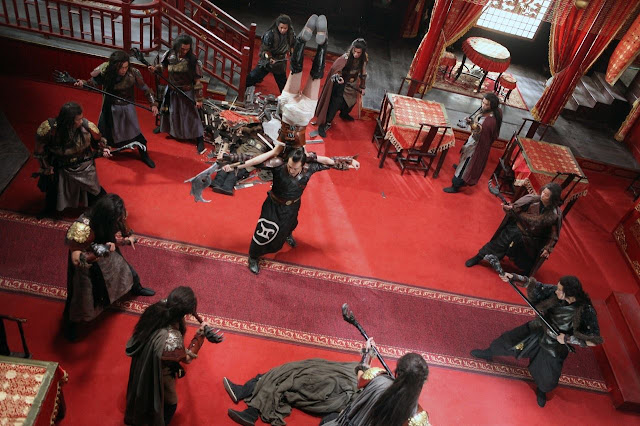