‘Rise Of The Guardians’ Unites Holiday Legends With Decent Success 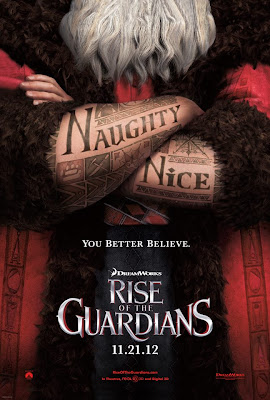 
North:  It is our job to protect the children of the world.  For as long as they believe in us, we will guard them with our lives...

This would seem like the perfect time for a movie like Rise of the Guardians to come out.  It arrives in theaters in the same year that audiences around the globe have already witnessed the ultimate superhero mash-up film, The Avengers, watched the end of Batman’s journey in The Dark Knight Rises, and are preparing to take a step back into Middle Earth with The Hobbit.  An animated hero’s journey film that combines Santa Clause, the Easter Bunny, the Tooth Fairy, the Sandman, and Jack Frost in an adventure together feels pretty appropriate.  However, while imaginative in its visuals, the film feels like it is riding on assumed knowledge regarding these characters in a very familiar story.  I will be curious to see if family audiences embrace this as new holiday favorite, but for the time being, Rise of the Guardians provides some fun. 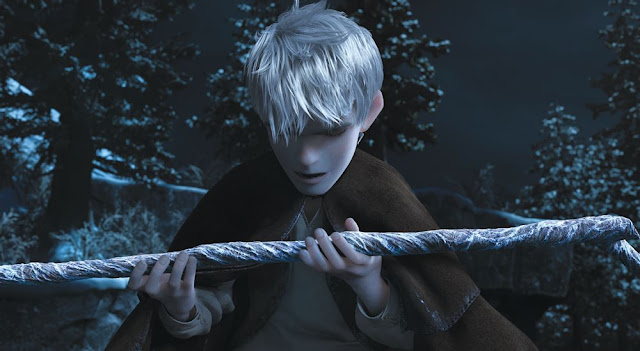 The story revolves around the character Jack Frost (voiced by Chris Pine).  He is an immortal teenager, with the ability to freeze things around him, thanks to his magic staff.  While he enjoys the idea of bringing his carefree attitude to those around him, he is also not believed in by the kids around the world, meaning that no human can actually see him.  In the meantime, the other mythical entities in the world continue to bring joy to children all over.  They are the Guardians, which consists of North (Santa Clause, voiced by Alec Baldwin), E. Aster Bunnymond (Easter Bunny, voiced by Hugh Jackman), Tooth Fairy (voiced by Isla Fisher), and the Sandman, who is silent.

When the Guardians are threatened by their old nemesis, Pitch Black (the Boogeyman, voiced by Jude Law), who has found a way to stop the children from believing, by giving them nightmares, thus taking away the genial power of the Guardians, Jack Frost is recruited to become one of them.  By teaming up, hopefully the Guardians can protect the children of the world and Jack can embrace the role he has been put in and be believed in again. 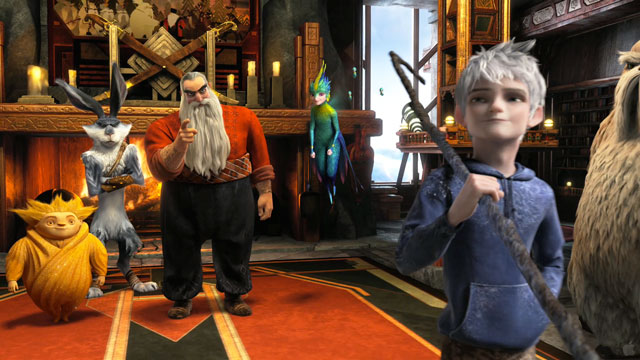 Whether or not children will be into this film, I will be curious to see.  While not convoluted, it seems like a lot of legwork needed to be done in the first half of the film, as it felt like many different rules were being established, even while still centering the story around the character of Jack Frost, who is the most (and one of the only) developed characters in the film.  Learning about the various ways in which this world works, how belief powers these Guardians, and what Pitch’s overall evil plot is, are all necessary, of course, but the film does seem to be cramming a lot in, while still leaving various aspects underdeveloped.

Because Rise of the Guardians is not simply taking these holiday/mythic characters that people already know, but actually coming from the established stories written by William Joyce, the film presents versions of characters like North and Bunnymond in a way that seems like we should already understand who they are.  The film presents North, for example, as a swashbuckling Russian, who also happens to be Santa Clause, and the idea is that all of these Guardians used to all be someone, before they became the legends they are now.  I understand that the books in which this film is based on gets into these characters individually, but coming into this film, we basically get broad sketches as to who each are.  That is fine, to an extent, as they are, for the most part, entertaining to watch, but the film runs into a similar problem that the X-Men films had, which is having underdeveloped characters who some are more keen to understand, given the comic backstory.  As opposed to The Avengers, which benefited from having five prequel films that lead up to it making more sense, Rise of the Guardians thrusts us into a world and hopes we just run with the fact that, for example again, the Easter Bunny is an Australian badass with boomerangs. 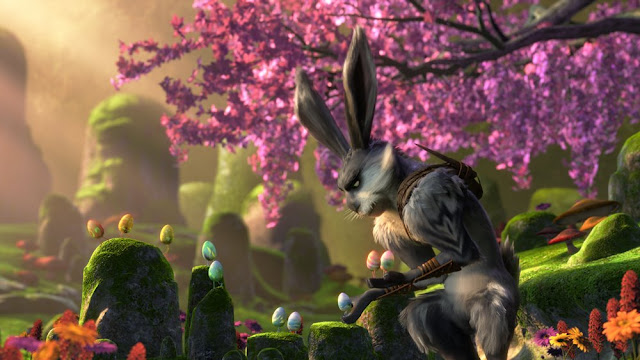 This would all be fine if the story was more interesting, but the problem continues there as well.  The plot of this film has been done before.  That is not inherently a problem, as it feels like a standard superhero origin movie.  I have seen the same plot beats before, so what matters is how effectively this particular film handles them.  I will say that Rise of the Guardians approaches some interesting points made possible by the scope of some of the action involved, but because some of the rules of this universe are underdeveloped, along with many of the characters involved, it undercuts how effective the storytelling is overall.  With that though, aside from whether or not someone prefers the fun nature of a swashbuckling Santa or a badass Bunny, the story does do enough justice to its most important characters:  Jack Frost and Pitch Black.

Along with being a hip, new Guardian for this generation (because he wears skinny jeans and a hoodie of course), Jack gets a backstory established for him, which is revealed more and more overtime.  We get a lot to understand with this character, which is effective enough for the film.  It almost feels like Chris Pine is so anxious to play Capt. Kirk again that he did this film as a way to tide himself over, but he has enough spirit to pull this character off.  Pitch is somewhat similar to a degree, though some of the details are a little shaky regarding what has happened between the Dark Ages and modern times.  That said, Jude Law is the most impressive voice performer in this cast, which helps in creating a decent villain. 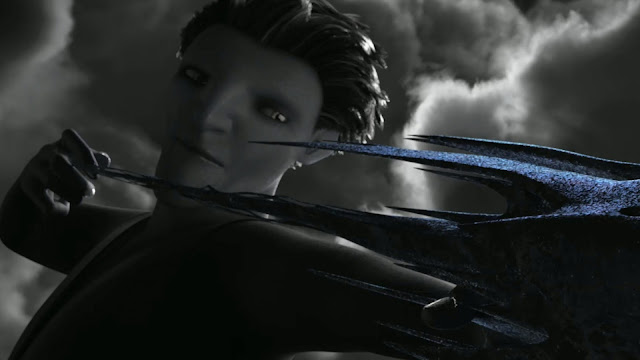 I did like that this film did not aim to be very cutesy.  While the film is humorous, it shies away from having too many adorable characters and pop culture jokes that factor into lesser films that come out of DreamWorks.  It should be noted that Guillermo Del Toro has an executive producer credit and was fairly involved in the development of this film.  While I would not necessarily say Rise of the Guardians has his stamp on it, there is a higher level of darkness here than one may expect from a film that has Santa Clause and the Easter Bunny as pals.  It is certainly light in spirit, overall, with plenty of jokes to go along with the exciting aspects, but it does allow itself to be a bit darker.

The animation of this film is nice.  I enjoyed the character models and the look of some of the established worlds, though I would not say it is as vibrant as other animated films that have come from DreamWorks.  It helps that there is a fine handle on the action beats in this film and the scope surrounding how far these characters travel.  To make note of the 3D, I will say that it makes the film seem darker in a noticeable way, though I did find it to not seem like too much of a distraction, with some scenarios actually coming off quite fun, such as rides in Santa’s sleigh. 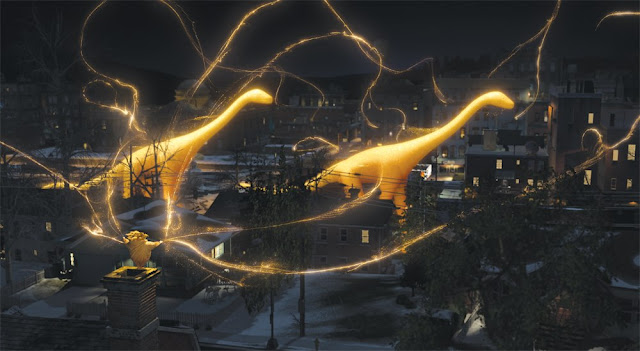 Rise of the Guardians would not exactly be my pick as ‘the film to see’ this holiday season, but it is a reasonably entertaining animated feature.  The concept and initial presentation was intriguing enough to me and I was happy that it was not a complete letdown.  Whether or not this film becomes a hit and there are more films created to explore some of these characters further will be a development that I am most curious about.  For now though, the film has enough going on to make it exciting enough for those who want to check it out, even if the mash-up idea doesn’t reach its full potential.


North:  Everyone, to the sleigh! Buckle up!
Bunnymund: Where are the bloody seat belts?
North:  That was just expression. 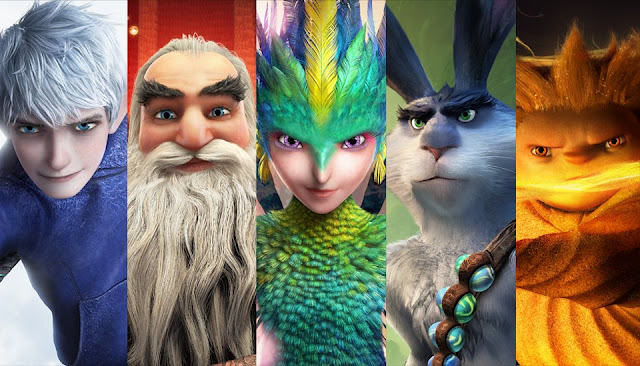