‘Red Dawn’ Should Have Stayed Behind Enemy Lines 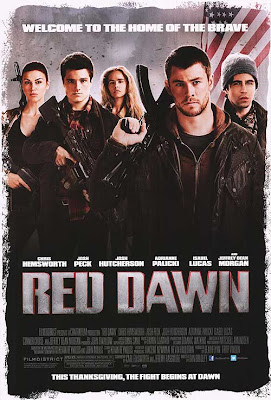 
Jed Eckert:  They messed with the wrong family.

Well I certainly liked the idea of remaking the film Red Dawn (which is not all that good), more than actually watching the remake.  This film is pretty terrible.  From the drab energy and look of the film, to the horrid acting and casting of many involved, to the basic logic and storytelling that this film puts forward, Red Dawn is a travesty.  I went in expecting to have a dopey, but somewhat fun time, but instead I sat through a painfully dull film that has almost nothing to offer as a redeeming value.  The only thing that makes this worse is the fact that a film about teenagers causing all sorts of carnage has been made bloodless and rated PG-13 so general audiences can presumably spend the holiday season watch a terribly stupid film in all its jingoistic glory. 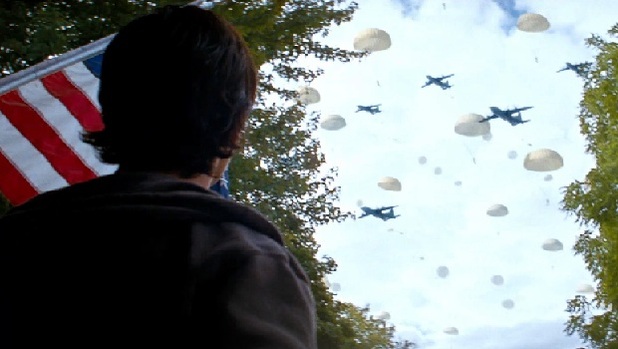 The film takes place during ‘modern times’ in Spokane, Washington.  We follow Jed Eckert (Chris Hemsworth), who has recently finished his tour of duty in Iraq and has returned home; along with his little brother, Matt Eckert (Josh Peck), the high school quarterback, who likes to do things his way, since his older brother ditched him, after their mom died.  Before we get too involved in the angsty drama between these boys though, a sudden invasion occurs, with North Korean paratroopers literally arriving in the streets and taking over.  Jed and Matt quickly head for the hills, with a few friends in tow, including Robert (Josh Hutcherson), Toni (Adrianne Palicki), and Daryl (Connor Cruise).

After making their escape, the brothers witness their father (Brett Cullen) getting murdered in front of them.  However, one of the last things he said was to do what he would do.  This of course leads to Jed taking the situation into his own hands and having his group form up to become a guerrilla resistance in their own hometown.  This means going through some training (the type of training that one Iraq vet can teach in order to have regular high school kids confidently take on trained North Korean soldiers) and working together to keep hope alive and liberate their town from the clutches of evil.  Calling themselves “Wolverines” (the town mascot), Jed, Matt, and the rest of the gang will do what they have to in order to keep those stars on the flag shining brightly…or something patriotic like that. 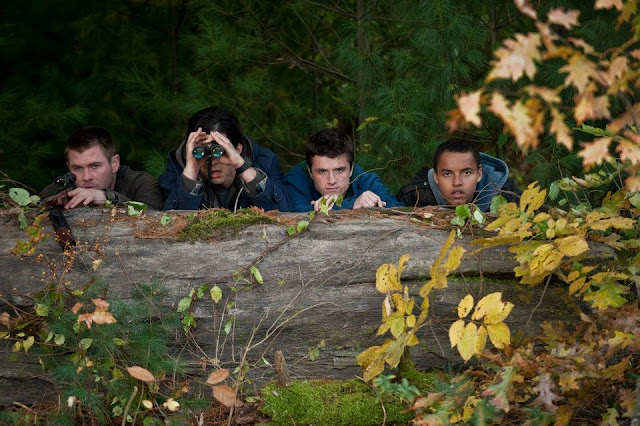 First things first; I’m all for suspending disbelief, even in the face of a film like Red Dawn, but as mentioned, this film has us believe that a 5-minute training session montage with Chris Hemsworth means that you are capable of making strategic plans and successfully taking down squads of North Korean soldiers.  There is a never a time that this looks convincing or feels compelling, as all of the action hits every predictable beat, while the actors continue to look pretty while doing it, no matter how mussed their hair is.  The only reason that makes any sort of sense is because we have no idea who these enemy soldiers are, given the lack of any detail about the enemy, beyond some vague lines of dialogue.

As some may be aware, Red Dawn was a victim of MGM’s bankruptcy, which led to it, along with much better films Cabin in the Woods and Skyfall to be delayed for a long time.  In the case of Red Dawn, it was three years and during that time, the film, which originally featured the Chinese as the enemies, was digitally altered and had dialogue (very obviously) dubbed over to have the enemy be the North Koreans.  No reason to question how the North Koreans were able to rustle up the kind of numbers to invade the United States, instead I wonder what that looks like, how long it took, who is in command, how far this invasion has gone, where the American military is, or any of the number of questions that the film purposely does not answer.  The closest it comes is when Jeffrey Dean Morgan, as a marine, shows up to set up the third act of the film. 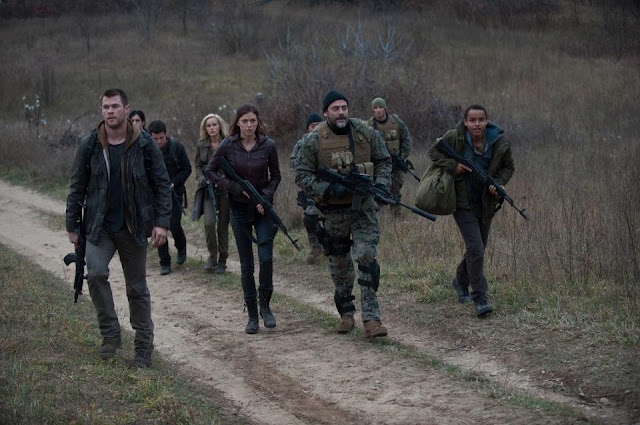 There’s another issue; Red Dawn is inept at creating a properly structured film.  It may be seen as a positive for the whole invasion to get underway in less than 15 minutes, but that’s for the viewer to decide.  After that, I have already mentioned the training montage, which is followed by more and more acts of violence with no real time frame established as to how long any of these people have been at this.  All of this leads up to the third act, which has no real build up to feel climactic in anyway at all.  The film certainly hits specific beats to suggest that it has nowhere else to go, so it might as well end, but when it reaches its final minutes, I cannot help but think that a much longer version of this film must exist somewhere, which I can only assume was thought to be even more terrible than the one I watched in theaters.

Let’s talk acting.  It is not very good.  I like Chris Hemsworth and I read that he got the part based on his dailies from Cabin in the Woods.  In Red Dawn, I think I literally watched the scene that followed him getting the Thor phone call, as he makes his exit from this film rather easily after having to do his best to give some really bad speeches, fight off enemies efficiently enough, and show off his smile (which I like and have been one to make note of often) very infrequently.  On the other side of things, you have Josh Peck, who is horrendously bad in this movie, made worse by the fact that he is given the role of the selfish little brother that is supposed to grow into being a leader by the end of the film.  I could take more jabs (though Jeffrey Dean Morgan is always welcome), but I will just stop at Connor Cruise.  I am certainly no actor, but this was the rare case where I thought I could have done a better job. 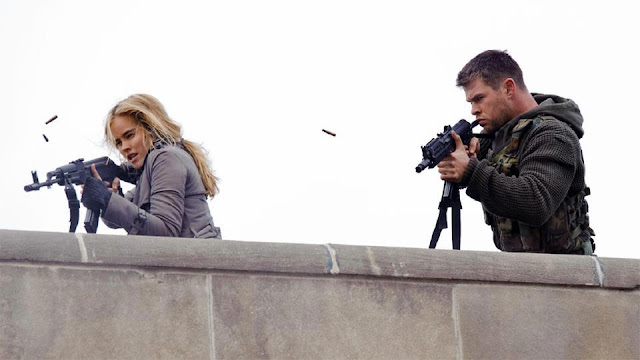 Prolific stunt coordinator and second unit director Dan Bradley makes his directorial debut here and decided to make a lot of the same choices as other subpar action movies.  Settling for going the semi-doc/shaky cam route, Red Dawn has action just as murky as its storytelling.  The visual effects look good enough, because that’s what $75 million should get you, but given how horribly everything is handled, it’s not much of a wonder as to why it feels like the whole movie was set on one city block and a patch of forest.

Last thing to go into:  who is this film for?  I wondered last year why a remake of Straw Dogs was needed, given how the original was indebted to the time it came from and the message it was trying to send, which was completely nullified in the remake.  Red Dawn is incredibly similar in that way.  The original had a semblance of horror in it, as it was not necessarily plausible, but it certainly had subject matter that felt relevant to when it came out, giving meaning to its existence.  This remake just feels like another case of execs throwing a dart at a board and landing on a movie property they had the right to.  Along with that, just as how the original was the first PG-13 film, due to its heavy violence and high kill count, we now get another iteration that is heavy on bloodless kills and has nothing to say about any of it.  Thanks…?  Red Dawn is pretty awful and replaces Total Recall as the most unnecessary film of 2012.

Jed Eckert:  For them this is just some place.  For us, this is our home. 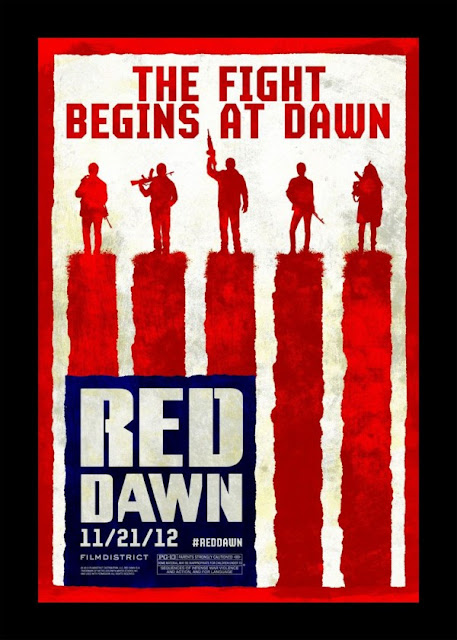 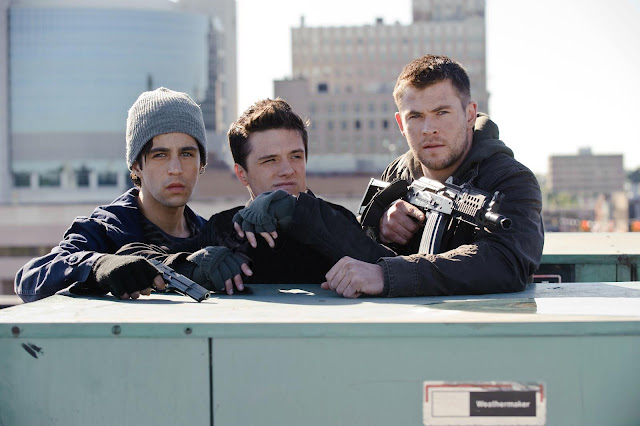