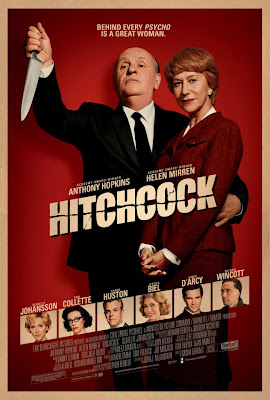 
Alfred Hitchcock:  All of us harbor dark recesses of violence and horror.  I’m just a man hiding in a corner with a camera, watching.

Among the people that I would offhand list as my favorite directors, Alfred Hitchcock would be one of them.  The movie I regard as my favorite horror movie (let alone a favorite movie of mine in general) is Psycho.  The idea of a movie revolving around the making of Psycho is certainly an intriguing one, made better by the fantastic cast that is involved, with a wonderful looking Anthony Hopkins in the guise of the Master of Suspense.  That is not exactly what I got, but what I liked about this movie, is how it chose to be a fun, romanticized story about a man continuing to challenge himself, as well as a relationship drama involving his wife.  It could have been a stodgy drama that follows recorded details to the letter, but the film is much more energized than that, which is impressive, given the corpulence of Alfred Hitchcock. 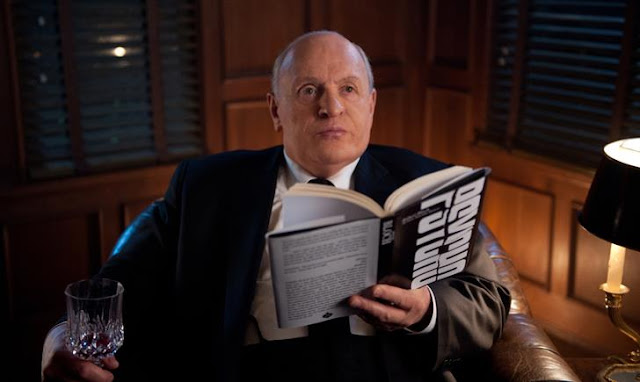 The film opens right after the premiere of North by Northwest in 1959.  Alfred Hitchcock (Hopkins) is greeted with congratulations, but also questioned about whether or not he should quit while he is ahead.  This leads to him seeking out his next project.  While Hitch’s wife, Alma Reville (Helen Mirren) suggests looking into a story by writer Whitfield Cook (Danny Huston), Hitch becomes much more intrigued by the book Psycho, which he feels he can turn into a film that is more than just a schlocky horror story.  So Hitch gains the rights, has his assistant, Peggy Robertson (Toni Collette), purchase every copy in the nation, in order to keep the story’s secrets hidden, and sets out to make the film.  Problems arise as Paramount wants nothing to do with financing the film.  This leads to Hitch putting up his own money and doing things differently than normal.  More drama ensues, as the shooting of the film takes its toll on the relationship between Hitch and Alma.

Hitchcock features a number of supporting actors, all representing people involved in the making of Psycho.  Scarlett Johansson is Janet Leigh, the film’s ‘leading lady’.  James D’Arcy is Anthony Perkins, who plays Norman Bates in the film, within this film.  Jessica Biel is Vera Miles.  Michael Stuhlbarg is Lew Wasserman, the famous talent agent.  Richard Portnow and Kurtwood Smith star as President of Paramount Barney Balaban and Censor Geoffrey Shurlock, the antagonists of the film.  And Michael Wincott plays Ed Gein, the murderer who served as inspiration for the story of Psycho. 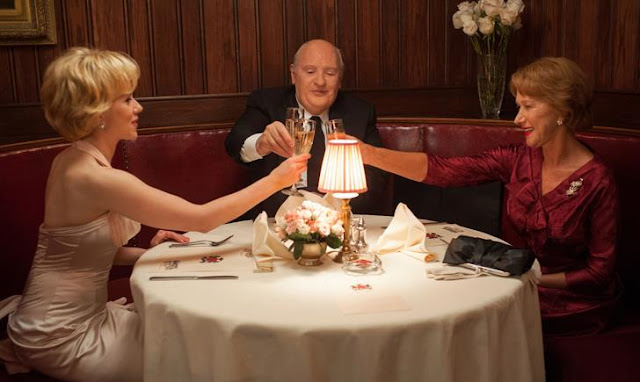 I know a lot about Psycho.  I am not proclaiming to be any kind of expert (or a man who knew too much…sorry), but I have read a lot about the film, the making of the film, and the people involved.  What I enjoyed about Hitchcock is how it was not so much concerned about getting those details rights, as it was in telling a story about the struggles of this married couple.  Now, I am aware that Hichtcock was also made without the support of the Hitchcock estate, which led to the film having to work around how they portrayed the making of Psycho, but with that said, I was more pleased with how various references were made to stories I already know, rather than seeing the stuffier version of this movie, which is all facts and no fun.  As it stands, Hitchcock works because of its efforts to be an entertaining film, as opposed to just a period drama.

The two key performances here, which lead to most fun, as well as other thoughts regarding the film, of course belong to Anthony Hopkins and Helen Mirren.  The two of them are great in this film and especially great together.  The way this relationship is portrayed and how the drama between them unfolds is effectively done and has you hoping they stay together by the end.  Sure, it is a little maudlin in the way this story plays out, but it is the strength of these performers that makes it work.  Hopkins, already impressive, given the makeup, is having a lot of fun as Hitch.  He brings a lot of what people know about the famous director, while also having his own qualities to make the performance not feel as much like imitation.  Mirren is even better in this film (though the fact that Alma is not as eccentric as Hitch might be one of the reasons), as her work as Alma is terrifically well-rounded in the way she makes this character the perfect balance to Hitchcock.  She knows how to argue with Hitch, tease him, have fun with him, and establish her authority.  If award consideration is given to either of these two, I won’t be surprised if Mirren is given more recognition. 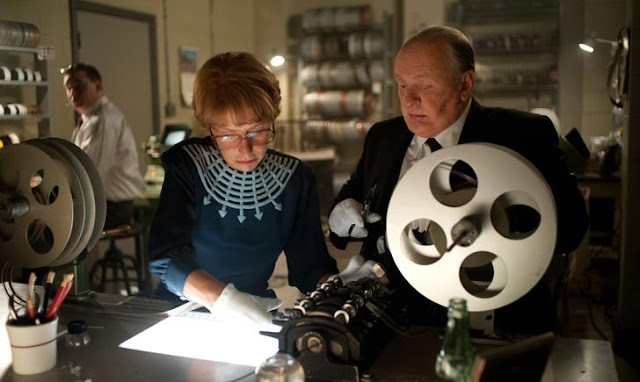 Direction of this film was handled by Sacha Gervasi, who previously made the rather wonderful documentary, Anvil: The Story of Anvil.  For being his first time helming a feature film, it shows a bit, as the film comes off at being a glossier TV production at times, rather than a superlative theatrical experience, but at the same time, I did enjoy elements that Gervasi brought to the film, such as his use of Ed Gein as an imaginary ‘mentor’ figure for Hitch to interact with.  It also helps that, given the relative low budget nature of this film, the period design of the film, cinematography by Fincher regular Jeff Cronenweth, and even the Danny Elfman score (tidbit: he did the score for Gus Van Sant’s shot-by-shot Psycho remake disaster), all add to making the film work better.  It is the robust cast that only further excels its quality.

Where I think this film will find its naysayers is in the portrayal of the scenarios and what could be considered revisionist history in a sense.  Again, I like that this film was a more romanticized version of this story.  The script was handled by John J. McLaughlin, which is an adaptation of the novel, “Alfred Hitchcock and the making of Psycho” by Stephen Rebello, and while that novel is much more meticulous in its details regarding the history of that process, this film is clearly more about being an entertaining film, with time devoted to dramatizing the relationship of the two central characters, which is fine by me.  As an example, it is well known that the shower scene in Psycho took multiple days and numerous shots.  The film handles this in a completely different matter, but it works due to how dramatic license has been utilized.  Really, as opposed to a stiff biopic like 2011’s J. Edgar, for example, Hitchcock works better when compared to something like Tim Burton’s Ed Wood, which is equally entertaining and brimming with fine performances.  I may not be getting the dead-on accurate portrayal of the making of Psycho, but I still liked what I was given. 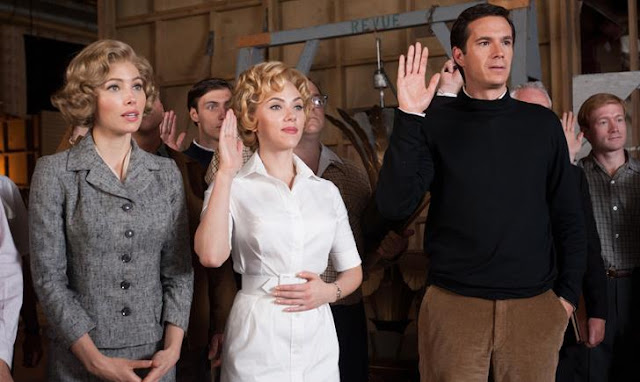 In a way, Hitchcock, is also similar to Spielberg’s Lincoln, in the way it is focused on a very specific time in this person’s life, as opposed to being an all-encompassing biopic.  With that, while I did like Lincoln for different reasons, Hitchcock works because it is a very entertaining film that has elements of drama, sure, but functions as a feature that is designed to show off this idealized version of a director many people are familiar with and what was going on during the making of one of his most popular films.  It is well-acted, with strong chemistry between the actors, and paced just fine, as it is focused and not too involved in presenting more than it has to.  Hitchcock was certainly a notorious figure and I was left spellbound. 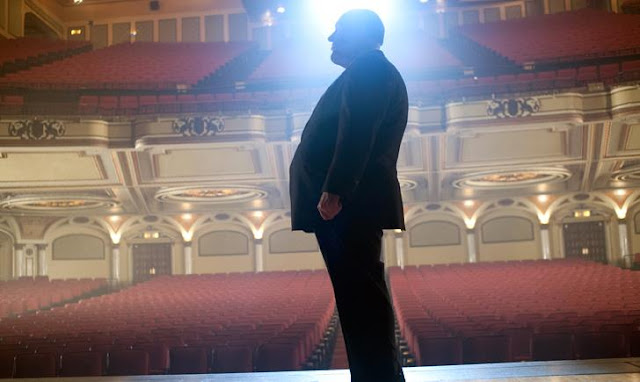