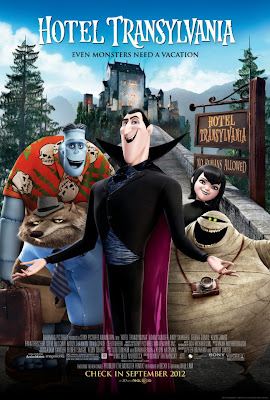 This is the story of a father protecting his daughter, while also coming to terms with societal changes.  The twist is that the father happens to be Dracula (voiced by Adam Sandler) and he is protecting his daughter, Mavis (Selena Gomez) and many others by having opened a hotel for monsters to gather and take vacations away from the threat of humans.  Monsters include Frankenstein's Monster (Kevin James), the Wolfman (Steve Buscemi) and his wife (Fran Drescher), Griffin the Invisible Man (David Spade), and Murray the Mummy (Cee Lo Green).  The movie takes place around Mavis' 18th birthday, where she is finally able to leave the hotel and explore the world, but Dracula is not having any of that.  Things get complicated when a backpacking human, Jonathon (Andy Samberg), happens upon the hotel, shocking both himself and Dracula, who has thought to have created a safe haven that can keep all humans away.  Things become more complicated when Jonathon and Mavis appear to grow quite fond of each other.  Monster Mashing Mayhem ensues.

Hotel Transylvania is fine.  It is not a great film, as it lacks a story that is really compelling and takes too many narrative shortcuts to make it work overall, but it also has a high energy and a rapid delivery of jokes that make it fun enough in moments.  It is just as shame that the jokes are not more consistently funny, as opposed to just being consistently coming at the audience.  Quality versus quantity does make a difference.  I was initially intrigued by the film because animation director Genndy Tartakovsky (Samurai Jack, Dextor's Lab) was making his theatrical debut.  Having learned that he was the sixth director to take the helm of this film, it shows that a lot of cooks in the kitchen made for a somewhat inconsistent film.  Again, the high energy certainly keeps things moving.  I liked some of the ideas presented in the film, but found lots of issues with others.  It does start off well enough and has a certain level of warmth that I appreciated.  However, the overall message, upon reaching the end, is kind of misguided and deciding to just say "screw it" and end on a song and dance number does not make everything okay either.  Colorful and fun for the kids, but there are plenty of animated films that have done better and are suitable for all, including another Sony Pictures Animation film - Cloudy with a Chance of Meatballs, which I will always jump to recommend.

Jonathan: Are they gonna kill me?
Dracula : Not if they think you're a monster.
Jonathan : That's kinda racist.