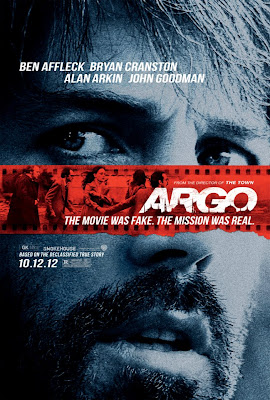 Argo is a dynamite thriller that takes a story based on true events and makes it work as a high stakes suspense feature.  Regardless of whatever facts may have been embellished or altered for the sake of the film, Argo works very well because it has a grounded sense of reality and a terrific cast, chock-full of character actors, all providing understated performances that do not attempt to overthrow the strength of the overall story.  It also benefits from having a 70s-style handle on the type of thriller it is, positioning it well amongst other well-plotted old school films.  Argo is about one thing, and it achieves that by working as a rock solid caper/rescue mission film, with some great direction from star Ben Affleck. 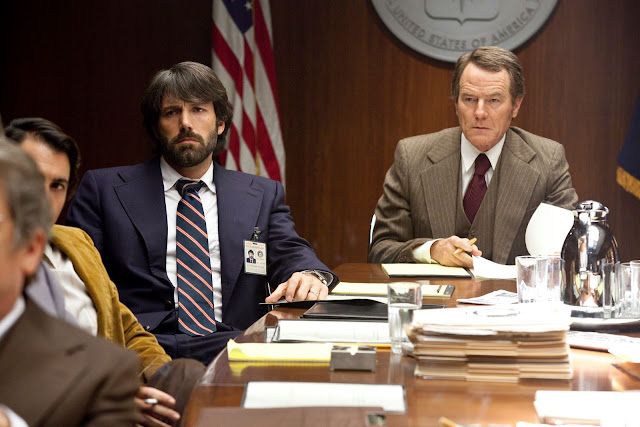 In the film, Affleck stars as Tony Mendez, a CIA specialist brought in to help out with an impossible situation.  The Iranian Revolution of 1979 has led to Islamic militants to take over the U.S. embassy in Tehran.  They have managed to take dozens of American hostages, but six were able to escape and remain hidden in the Canadian ambassador’s home.  Mendez and fellow specialist Jack O’Donnell (Bryan Cranston) have been tasked with finding a solution that will bring these people home.

Inspired by his son’s love for sci-fi movies, Mendez comes up with an unlikely plan.  With the help of make-up effects artist John Chambers (John Goodman) and producer Lester Siegel (Alan Arkin), Mendez plans to make a fake movie, Argo – a fantasy adventure.  Argo will be given a poster and ads in Variety to sell people on its existence and the six Americans in Tehran will be given cover identities as a Canadian film crew on an exotic location scouting trip. They will hopefully be able to meet up with Mendez, learn their new backstories, in case of questioning, and escape the country via the airport.  It is an elaborate plan, but a plausible one, so hopefully the CIA and Hollywood can help pull it off. 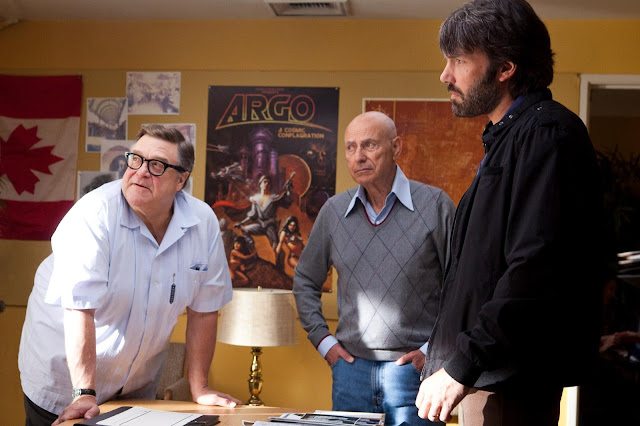 With Argo, Ben Affleck continues to prove his talent behind the camera.  He debuted with the noirish-detective drama infused with questions surrounding morality, Gone Baby Gone.  That was followed by the larger-scaled, crowd-pleasing, bank robbery film, The Town.  And now he has a spy thriller, which has a serious premise, but manages to be incredibly engaging due to both the handling of tension and the amount of levity in the film.  Making the film more successful from a directorial standpoint is the way Affleck is able to make a tense motion picture that does not rely on action sequences.  Akin to something like Apollo 13, let alone thrillers from the 70s, which Argo happily tries to resemble from a cinematic perspective, the film is able to create an engrossing experience that revolves more around characters talking out a situation and using careful planning that will hopefully be successful, before actually getting to the big moments that may or may not happen in the desired way.  The third act of Argo may feature some terrific exercises in suspense, as we see how the plan unfolds and we are on the edges of our seats waiting to see what the payoff will be, but the setup to get there is just as compelling.

Servicing the idea of having a plot function based on discussions and actions that are all character-based (hurray for well-constructed adult dramas), the cast in this film is uniformly excellent and features a large roster of wonderful character actors that I do not even want to try to list in full.  I can mention a few notable performers, but the reason I think this cast works so well for the film is due to the fact that no one really attempts to be a standout.  That said, I will give one caveat to the great Alan Arkin, who is playing a movie producer and gets to act like a very Alan Arkin-type character, which is to say that he gets all the best lines in the movie that don’t pertain to the more serious side of the plot (Goodman manages to get away with this, as he is not calling as much attention to it). 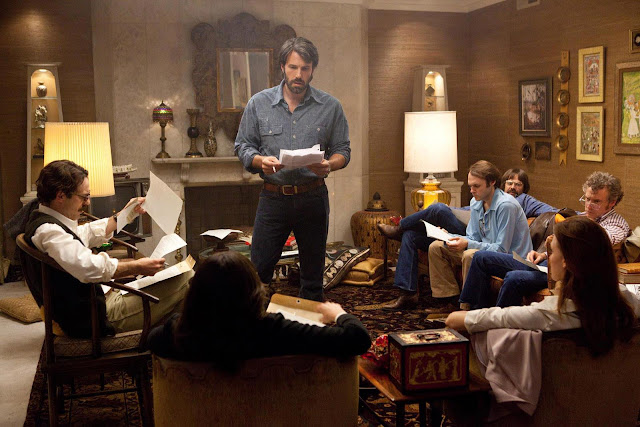 With Arkin out of the way though, I can point to the effectiveness of people like Cranston as the CIA specialist helping Mendez out from the US, along with some of the hidden Americans like Clea DuVall and Tate Donovan, who do a good job of humanizing these people that we hope get to escape from Iran.  Affleck does a fine job in the film as well, making Mendez an intelligent person who is dedicated to completing a mission but also open enough with his emotions to show that he really cares about it being successful.  The fact that we get only a few details about his personal life and a coda that feels earned, by serving as a conclusion rather than something tacked on, is nicely played as well.

I should probably mention the style of this film more as well.  As opposed to being a slick take on this story, bringing in its own weight, based on technical capabilities and possible subtext based on where history has taken us since, Argo is a very straightforward film that is intent on sticking with an old school style.  I would maybe be surprised by how many visual effects were actually used in creating the look of this film, because Argo certainly does not call attention to its setting, despite the fact that the film is spot-on in terms of depicting the time period.  The wonderful cinematography from Rodrigo Prieto does a great job of putting this film right in the same realm, visually, when comparing to 70s and early 80s-based thrillers, which the film acknowledges even further by running the old Warner Brothers logo right at the start. 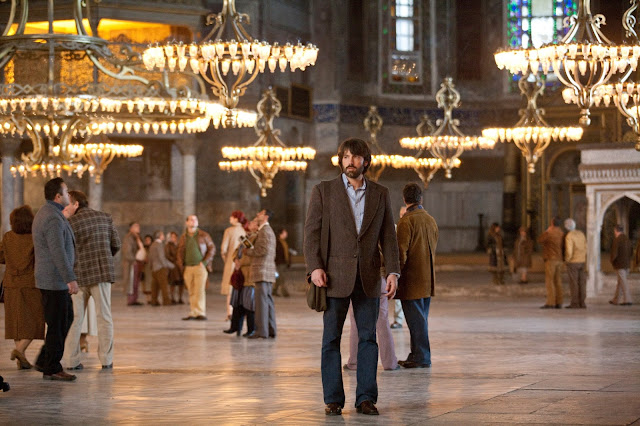 A smartly written script, a terrific display of acting from a talented cast, and direction that keeps the film engaging on multiple levels, including the all-important thrill level, especially during the last quarter of the film; Argo is top notch entertainment that can be enjoyed by many.  It will play great for crowds and be rewarding because the film tackles a true story with the right kind of energy, without insulting anyone’s intelligence.  Argo tells the story of real people facing high stakes, following through with “the best bad idea” the CIA could think of, and it is truly enjoyable.


Lester Siegel:  I got to be honest with you, I’ve been on suicide missions in the Army that had better odds than this one. 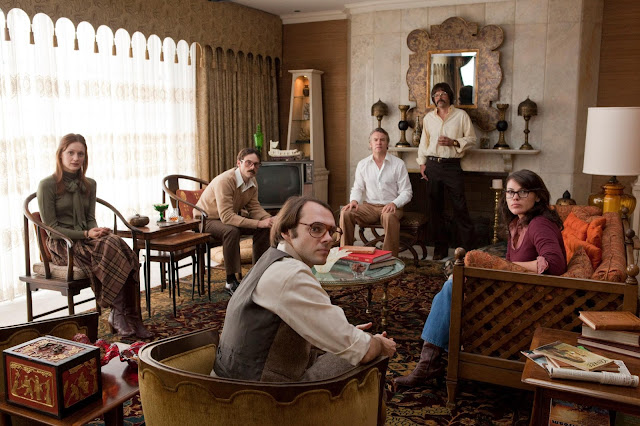 Aaron is a writer/reviewer for WhySoBlu.com.  Follow him on Twitter @AaronsPS3.
He also co-hosts a podcast, Out Now with Aaron and Abe, available via iTunes or at HHWLOD.com.
By Aaron Neuwirth
2012 Films Alan Arkin Based On a True Story Ben Affleck Bryan Cranston Chris Terrio John Goodman Thriller
Reactions: