‘The Campaign’ Is Sturdy Candidate 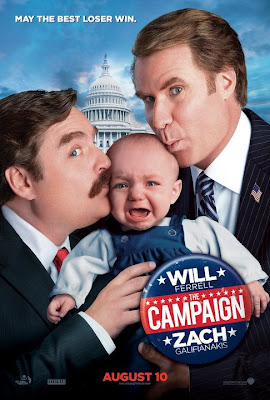 For all the big budget, summer action/sci-fi/fantasy flicks that have recently come out, it is nice to also get the big budget, carefree comedy around this time of year as well.  The Campaign is a silly comedy that revolves around Will Ferrell and Zach Galifianakis as rivals in an election, where both men are in the running for Congressman.  It is a fairly simple setup and the comedy is exclusively about having fun.  I wish there was a little more in the way of political satire, especially since having the R-rating seemed to imply a bit more free reign; however, I got enough entertainment out of seeing these two stars acting as political rivals slinging mud at each other, with more and more ridiculous outcomes. 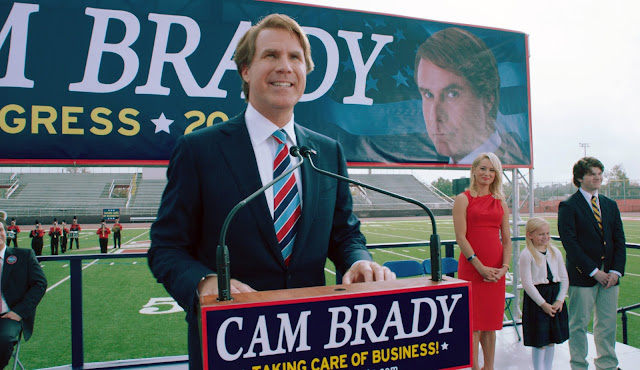 The plot is fairly straightforward.  Camden “Cam” Brady (Will Ferrell) has consistently won the title of Congressman in a small North Carolina district, because he always runs unopposed.  Cam is not much of a Congressman, as he knows little about the actual issues and is all talk, with a propensity for embracing the perks of his position of power.  Because of this, two wealthy CEO’s (John Lithgow and Dan Aykroyd) are looking to gain influence over the district by supporting a naïve, rival candidate.  Their choice is Martin “Marty” Huggins (Zach Galifianakis), who is well-meaning, but also a bit of an odd one and a rube.
Naturally, Cam is bothered by a sudden threat to his reign as Congressman and is looking to squander any chance of a loss in the election, with the help of his campaign manager Mitch (Jason Sudeikis).  Obviously, Marty is no pro at this, but he fortunately gets help from a cutthroat manager of his own, Tim Wattley (Dylan McDermott), who will do whatever he can to transform Marty into a winner.  Both candidates no proceed in the race, going to deeper and deeper lengths to make the other look bad, which does not come short of punching babies, Taliban association allegations, and sex scandals.  May the best man win, indeed. 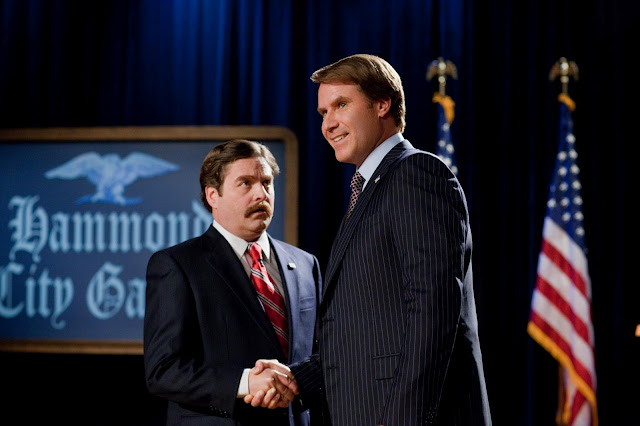 There are a lot of very funny things in this movie, but it does not quite add up to an all-out comedic extravaganza.  It is fortunate that both Ferrell and Galifianakis are both in what I would consider top form.  I also find it fortunate that the supporting players are fun as well, with some shining particularly brightly.  That said, because the movie has such a constrictive plot, it has to fall into areas that are expected and slow the film’s manic energy down a bit.  There are times when absurd and bizarre situations occur, which I think is fine, but the fact that the movie tries to maintain a certain reality and structure unfortunately undercuts this film.  I think a movie like Anchorman works so well because it was not afraid to stick with the goofy universe it created for itself.  The Campaign tries to have it both ways, but the script does not have enough fuel in the reality or satire tank to keep that side of its engine running.
Getting back to the actors involved, it would be easy to write off Ferrell as essentially doing the same shtick again, but I think the fact that he is playing the ‘bad guy’ in this election works in his favor.  While not exactly the overblown antagonist, Ferrell gets to embrace a slightly different area that is focused on crushing competition through shady means if necessary.  Yes, he is still a man-child, shouting occasionally, but he makes me laugh nonetheless.  As a counter, I was not initially sure how I would take Galifiankis, who seemed to be doing a riff on his character - ‘twin brother’ Seth Galifiankis, but I was quite taken by his performance.  I think it is the fact that Marty is such a nice person at heart, which made me appreciate the character more and find his little traits humorous, as opposed to annoying. 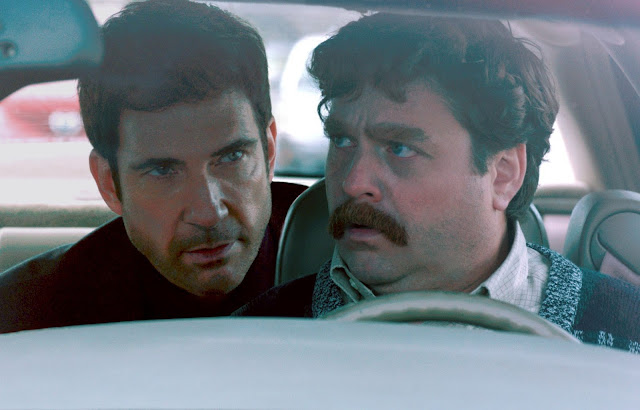 As far as the supporting cast goes, there is a strong presence here, when you have Jason Sudeiks, John Lithgow, Dan Aykroyd (who is playing a role that has a lot in common with the villains in Trading Places), and Brian Cox, but they only get a few  moments to really have some fun.  I was actually more pleased with the small, but fairly effective roles of these candidate’s wives (Katherine LaNasa and Sarah Baker), who clearly seemed to just have to role with various improve moments with the leads, but still managed to hold their own.  Coming off the best though, easily, was McDermott as Tim Wattley, who made his character more and more entertaining as he became more and more serious.  Given that I always find McDermott bland (even as he bordered on insanity, while angrily masturbating in American Horror Story), it was a nice surprise to be so entertained by him in The Campaign.
The biggest problem that I found with the film was its lack of greater substance.  It is not that I really needed extra layers in what is supposed to be a big summer comedy, but it is an element that generally finds its way into these big Will Ferrell films (take another look at The Other Guys or Talladega Nights).  The Campaign is a movie that could have easily went into more political satire, on par with something like how The Daily Show or Colbert function, but it stops short.  The ideas are there and I did see some smart moments scattered throughout, but nothing that didn’t really feel less than obvious.  It is a bit of a shame, especially because the film has been directed by Jay Roach, who is mainly known for Austin Powers and Meet the Parents, but was also the director behind the great HBO film Recount, along with Game Change, which are fitting films to bring up here.  Eastbound & Down scribes (along with other recent comedic works that involved Ferrell) Chris Henchy and Shawn Harwell were responsible for the screenplay here as well, and I know they are capable of digging a little deeper.  As it stands, the film goes for the filthy, but keeps its politics fairly clean. 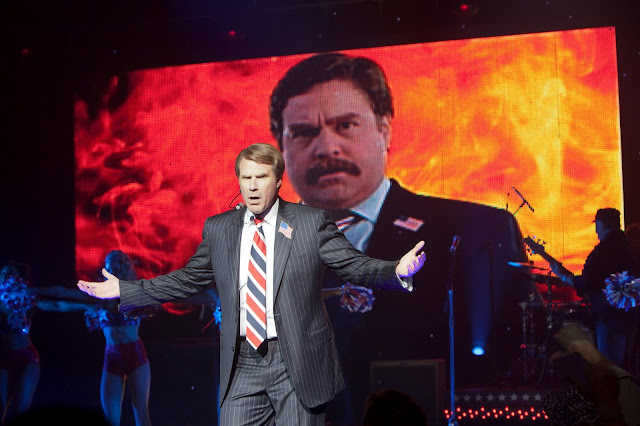 Ultimately The Campaign is good, but somewhat forgettable.  I don’t think it’s a great comedy, just a good one that plays it a bit too tame when it comes to actually delving into political satire.  That said, I laughed a lot during the film, which is of course thanks to the ways in which Ferrell and Galifianakis go about finding ways to make me laugh, not to mention the efforts of the supporting cast, with credit again going to Dylan McDermott.  I was at least happy that the film decided skew a bit more mature and be happy with having dirtier jokes.  I just also wish the film was a bit sharper as well.  There’s funny stuff here; it’s just not quite an out and out smash comedy hit.

Marty Huggins:  This dog’s got a lot of fight in ‘em. 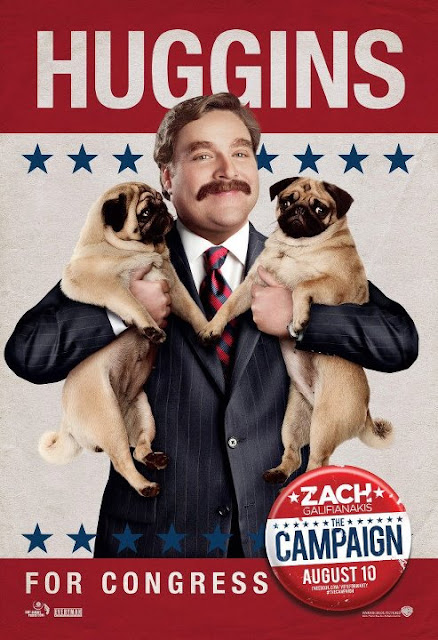 Aaron is a writer/reviewer for WhySoBlu.com.  Follow him on Twitter @AaronsPS3.
He also co-hosts a podcast, Out Now with Aaron and Abe, available via iTunes or at HHWLOD.com.
By Aaron Neuwirth
2012 Films Brian Cox Comedy Dan Aykroyd Dylan McDermott Jason Sudeikis Jay Roach John Lithgow Will Ferrell Zach Galifianakis
Reactions: