First and foremost, I should say that I really dug ParaNorman.  The film has quietly stood as one of my most anticipated films of the year, as it fell into the realm of having so many different things that called out to wanting me to like it, and it completely delivered.  A stop-motion animated zombie film that can appeal to all audiences, from the studio behind Coraline, is a film that easily has my interest and the fact that ParaNorman was able to match the kind of high expectations that I don’t like to have for films is quite rewarding.  The film is great to look at, unique in its presentation, fun and exciting, as well as very funny, and not afraid to present some deeper themes and meaning behind a tale that could have simply been a kid’s zombie movie.  Simply put, ParaNorman has all of its parts assembled incredibly well. 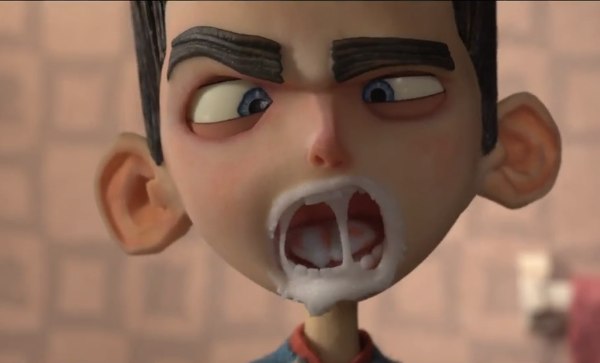 The film revolves around young Norman (voiced by Kodi Smit-McPhee), an 11-year-old kid that loves zombie movies and has the ability to speak to the dead (ha-ha, kids).  Because of this, people don’t really “get” Norman.  This includes his parents (Jeff Garlin and Leslie Mann), who just want their son to be normal, his cheerleader sister, Courtney (Anna Kendrick), and the kids at school, who call him a freak, including the school bully, Alvin (Christopher Mintz-Plasse).  While Norman is just fine interacting with various spirits that hang around his New England home town of Blithe Hollow, only one other boy, Neil, who is made fun of for being fat (voiced by Tucker Albrizzi), is happy to be friends with Norman.
The main thrust of the story involves Norman, with the aid of Neil, Alvin, Courtney, and Neil’s jock/doof brother Mitch (Casey Affleck), working together to stop a witch’s curse from leading to the destruction of the town, due to the arrival of the undead.  Norman’s ability to speak to the dead will come into play, but in doing so, Norman may learn certain truths about the undead that threaten the town, along with the witch who has caused all of this to happen. 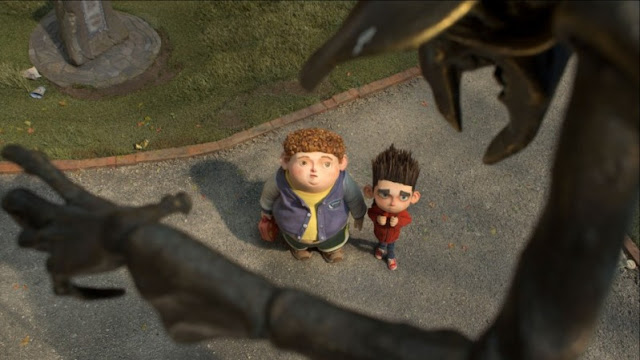 Aside from the fact that this film has been made by utilizing stop-animation, which already leads to a very distinctive look and feel for any film, one of the most interesting things I found about watching this film was how timeless it felt.  Takeaway a few moments involving cell phones and this film could easily be set in a time that ranges from the late 70s up to now.  I mention this, because it seems apparent that writer/co-director Chris Butler is clearly reveling in getting to make a film that feeds into his nostalgia, while also supplying a pretty cool coming of age flick that has zombies and ghosts and other kooky things.
To speak more about the look of the animation, ParaNorman is a great piece of art.  Produced by Laika, which produced the equally great looking (albeit creepy) Coraline, ParaNorman is very clearly the product of a large number of animators, filmmakers, and artists who all wanted to create something unique and special.  Character designs are all really cool and interesting, particularly the undead folks, who have varying distinguishing qualities and move just the way I like seeing zombies move (quite shambly).  The various sets and backgrounds do plenty to further open up this new world that the film exists in and feels completely comfortable in doing so.  The way Norman interacts with the spirit world (and how it decides to interact with him), in particular, adds a really intriguing factor to the film as a whole. 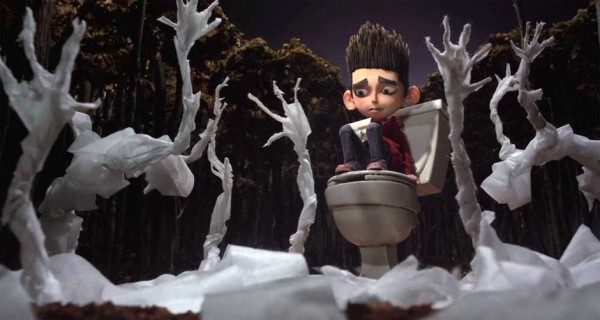 It does not hurt that the film, while not playing up an over usage of pop culture references, is clearly indebted to other horror films and zombie features, with plenty of shades of John Carpenter (i.e. the music – a wonderful score by Jon Brion), due to how it is structured, how the camera angles and editing is utilized, and how effective the balance of comedy and thrills are worked in.  For the sake of the children (yes, I’m thinking of the children), I would say that this movie does contain some scariness, but not in the same way that Coraline had, where the general atmosphere and imagery seemed much more in line to lead to nightmares.  ParaNorman is very much a film for all audiences with some areas that could seem scary, but a general attitude that is a lot of fun.  I also found it quite neat to see a movie like this, which involves zombies terrorizing a town, work within the realm of a PG rating.
The movie is quite funny, if I have not emphasized that enough.  It contains many laughs that are sometimes slapstick, other times based on great one liners, and many times based on the perfect sight gag (my new favorite comedy scene this year involves a slow vending machine vs. zombies).  The solid voice cast only helps matters further.  Kodi Smit-McPhee is good in the role of Norman, but that is more due to the pathos we get from his character.  Keeping things lively, Albrizzi has a naïve charm that serves him well (it helps that the actor is actually the same age as his character).  Mintz-Plasse, Kendrick, and Affleck all have great moments to work with.  Garlin and Mann each work as opposing parents.  And I would be remiss not to mention the brief but effective work from John Goodman and Elaine Stritch. 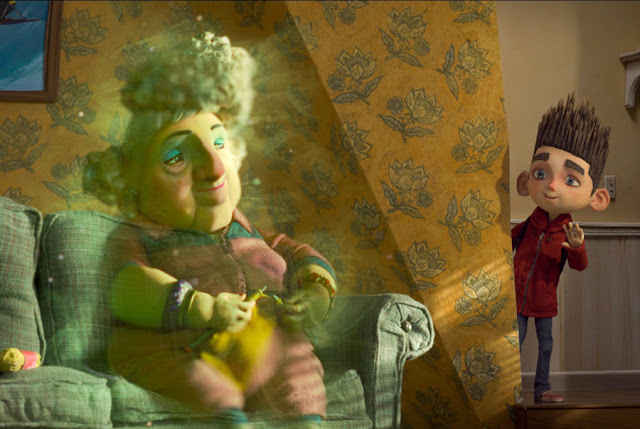 Last thing to add, the fact that this film deals with a number of different themes is important and played just right.  Norman is a pre-teen dealing with the fact that he is different.  How we see him understanding this and using it to play into his actions is important.  Many characters in the movie are dealing with the fact that their fear has turned them into bullies.  Watching this play out is also important.  Seeing how this film handles these significant ideas, applying them to the narrative and feeding into the overall conclusion, without feeling like a big morality tale, is certainly a benefit for the film.  ParaNorman plays so many things in a fairly low-key, but effective way that I am willing to forgive minor quibbles such as an understandably quick first act and the use of multiple climaxes.  The fact that the film can balance humor, zombie-stuff, and still contains a message or two is just nice.
Just as how the town may think Norman needs to be committed, I was completely committed to this film.  It may be a little spooky for the youngsters, but the tone certainly finds the right balance in keeping a level of fun alive throughout, in ways that harken back to the Spielberg-Amblin days, with films like The Goonies.  Come to think of it, ParaNorman really succeeds in delivering on what I was hoping 2011’s Super 8 was aiming for.  The film is a work of art and full of life and imagination, but also focused, with an emotional core that resonates and leads one through a fun adventure with a solid conclusion.  That fact that it is both hilarious at times, but also solid enough to deliver on addressing at least two morals, without overdoing it, is a great accomplishment as well.  As a person who loves zombie movies, really appreciates stop-animation filmmaking, and enjoys a good supernatural adventure film, ParaNorman was all I could have wanted.

Courtney:  I just knew something like this was going to happen.
Mitch:  Really? Cause that zombie bit really threw me. 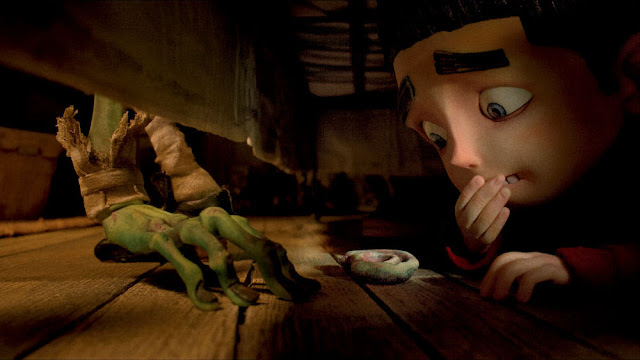