‘Lawless’ Has Bootleggers, Bloodshed, And The Beef 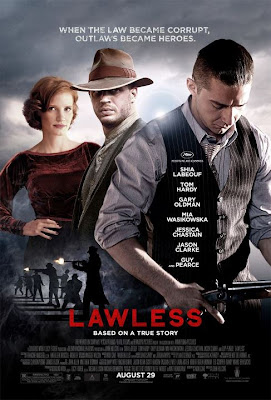 Forrest Bondurant:  It is not the violence that sets men apart. It is the distance that he is prepared to go.

Lawless is an enjoyable, Prohibition-era drama with plenty of really strong violent bits.  It has a very good ensemble cast to work with, a director who knows how to make things look good, and plenty of other ingredients to make a solid picture.  I think the film’s biggest problem is that it has the feel of an indie, but still conforms to a lot of generic plot elements.  While getting the film that relishes in having Malick-like qualities, characters with sparse dialogue, and not much restraint regarding the violence, it also settles for having characters making poor choices only for the sake of the story, romantic subplots that bog things down, and a lack of subtlety at times.  These aspects take away from Lawless being a great film, but it still has enough to it, especially due to Tom Hardy and the general look of the film, which makes it an entertaining one. 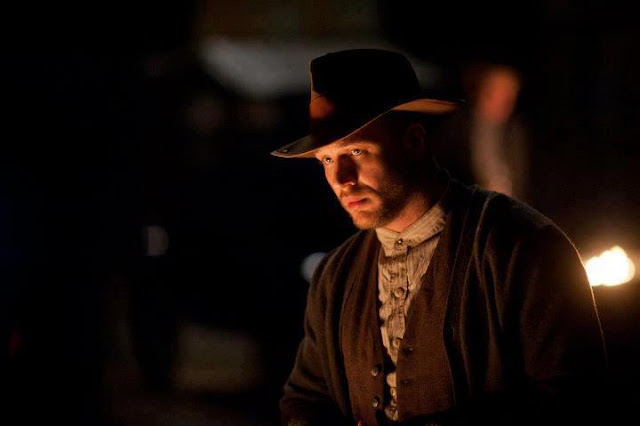 The film is based on The Wettest County in the World by Matt Bondurant, who based his novel on the true life exploits of his grandfather and great-uncles, the Bondurant brothers.  The film is set during the Prohibition-era, in Franklin County, Virginia and revolves around the three brothers, who are bootleggers.  The brothers are Forrest (Tom Hardy), who is practically a legend, given that people say he’s invincible. He is a man who will use violence when necessary, but is fairly quiet in general, with a fondness for cardigans, it seems.  Then there is Howard (Jason Clarke), who is happy to use violence as a means to any end, especially when he’s drunk on moonshine.  Lastly, the youngest brother is Jack (Shia LaBeouf), who has troubles with violence, but serves as a good getaway driver and wishes he could be as involved in the bootlegging business as his brothers.
The thrust of the plot revolves around a corrupt Special Agent, Charlie Rakes (Guy Pearce), who has come from gangster land Chicago to rural Franklin County, practically demanding that the Bondurant’s, as well as the other bootleggers in the area, pay protection fees, in order to keep their illegal businesses going.  The Bondurant’s do not take kindly to this, especially when Rakes acts as a threat, beats up Jack, and disturbs Maggie (Jessica Chastain), the former dancer-turned-bartender at the Bondurant’s bar and love interest for Forrest.  Rakes is the main threat, but the story does mainly center on Jack and his adventures that could lead him to rise in status as a successful bootlegger, similar in status to his icon, gangster Floyd Banner (Gary Oldman) and possibly help him win the hand of the preacher’s daughter, Bertha, (Mia Wasikowska), whom he’s been courting. 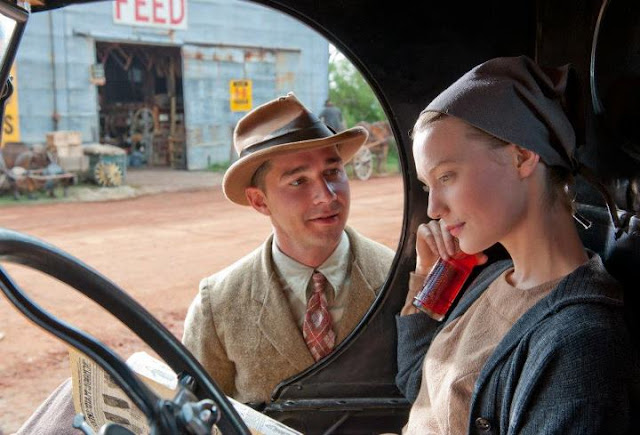 Now that last bit, which involves how the story mainly revolves around Jack, is why the film is unfortunately not better than he is.  I would not say this is LaBeouf’s fault, as I think he is a capable young actor (regardless of how much he’s been putting his foot in his mouth lately), although there is a noticeable difference in acting caliber, when putting LaBeouf up against the more seasoned actors.  Regardless, while the film has a way more compelling character in the form of Forrest Bondurant, Lawless opts for putting the more generic story revolving around young Jack at the forefront.  This leads to various amounts of story logic that only occurs because that is how these types of stories are supposed to play out, as opposed to being something much more naturalistic, like director John Hilcoat and screenwriter and musician Nick Cave’s previous collaboration, The Proposition, for example.
When not focusing on Jack, however, the film works pretty well as a depiction of this setting and time period that moves somewhat aimlessly, besides the inevitable showdowns that take place.  I enjoyed being in this world and could have used more from some of the other players.  Gary Oldman, for example, is third billed in the cast, but is really only in this film for what feels like an extended cameo bit.  Really though, it is Tom Hardy who dominates every scene he is in and the film could have worked wonders, were it about his life.  I’ll revisit him later, but to address more of why this film works, it is because we have people like Hardy’s character and the rest, who interact with a certain level of familiarity, which is a nice quality for a film to have been able to achieve. 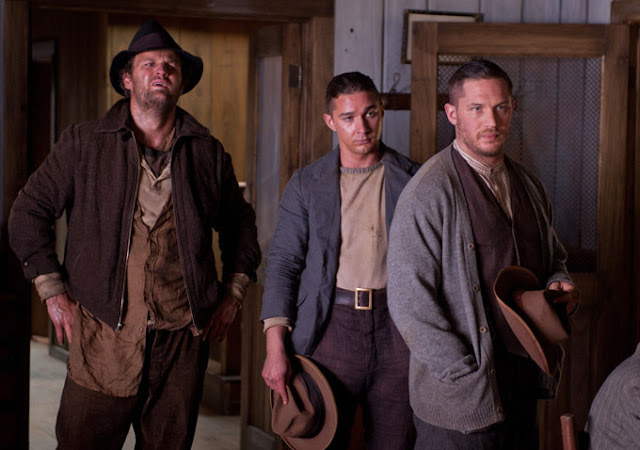 Back to Hardy, Forrest is a wonderfully charismatic figure who has dialogue that allows him to grumble just as much as speak.  His physical presence is notable, but his physical performance is quite strong regardless.  When this man needs to be threatening, it all comes out due to the eyes.  Forrest gets to be violent, for sure, but I just as much enjoyed confrontations he had, which allowed him to just stare at someone, before tagging a scene with a grunt.  It doesn’t hurt that he provides the audience with moments to laugh as well.  Given that these characters are serious people, it is nice to know that the film allows for humor to come into play as well.
The other two notable performances come from Jessica Chastain and Guy Pearce.  Coming off a monster year last year, Chastain arrives in Lawless continuing to make note of why she has emerged as a great actress.  Her role is quiet and focused, but effective nonetheless.  There is a history communicated in just a few lines of dialogue that suggests all you really need to know about her.  Pearce, on the other hand, is in the showiest role of the film, let alone any film that comes out this week.  His Charlie Rakes character is described by the others as a “nance”, as he arrives with a very particular dressed-up style and appears to want to keep clean, despite not being worried about getting his hands dirty.  To top this off, he has his hair blackened, smothered in pomade, and perfectly parted down the middle.  All of these things aid in his larger-than-life performance, which firmly establishes him as the villain.  It is only because Pearce is so good, that I can look past the lack of more dimension to Rakes.

Hilcoat’s direction in this film is fitting, even if it is a bit of a departure for him, given the darkness of The Proposition and The Road.  This is not necessarily a bad thing.  Despite having many mainstream elements incorporated into the film, Hilcoat has made a great looking film that is able to have fun, even if it does delve into some graphic areas.  I am mainly referring to how the violence is portrayed.  It is not glamorized or gratuitous.  When people get hurt, it looks like it really hurt.  But getting past that, the film is able to have fun with itself and incorporate some stylish elements as well, many of which can be credited to cinematographer Benoit Delhomme.  There are some instances where the visuals are way too on the nose in depicting an obvious theme or motif, but the film takes this rural setting and the style of the 20s/30s and really gets a lot out of it.  And it should go without saying that Nick Cave’s score for the film, with collaborator Warren Ellis, is quite good.
Overall, I would easily say that Tom Hardy, alone, is worth the price of admission with this one.  Lawless has its share of flaws, but it is still quite enjoyable, due to Hardy and many other strong elements.  It is an entertaining period drama that evokes gangster films and westerns quite well.  Narrative issues aside, I was caught up in this simple world where apparently bootleggers are the good guys, the evil Chicago police keep getting in the way, and neither were about to lay down for nobody.

Forrest Bondurant:  We are survivors.  We control the fear.  Without the fear, we are all as good as dead. 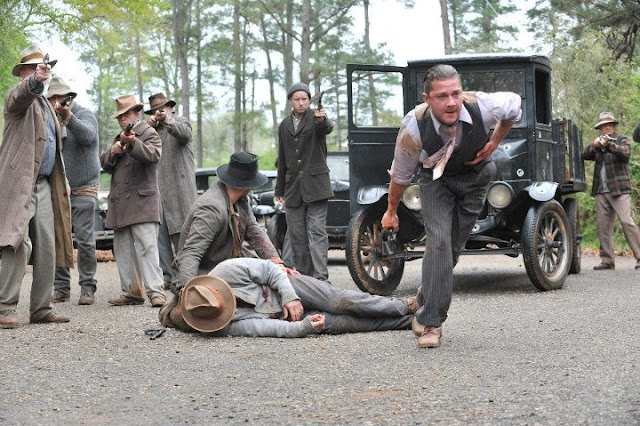