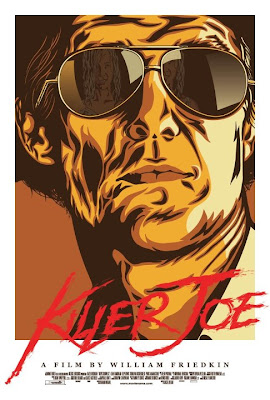 Dottie:  I heard you talkin’ about killin’ Mama.  I think it’s a good idea.

The Killer Joe poster describes the film as a “Totally twisted, deep-fried, Texas redneck, trailer park murder story.”  That is entirely correct.  Director William Friedkin reteams with playwright Tracy Letts (they previously made Bug together) for a wild and darkly comedic thriller that resembles something akin to a Coen Brothers film, except Killer Joe is much more explicit.  The film is quite lurid and deals with a very dysfunctional family, but it is also incredibly well acted and put together.  Headed up by Matthew McConaughey, in a performance that sizzles, this is a film that fires on all cylinders, as it moves along without restraint and does not apologize for going to twisted places to become an absurdly entertaining film. 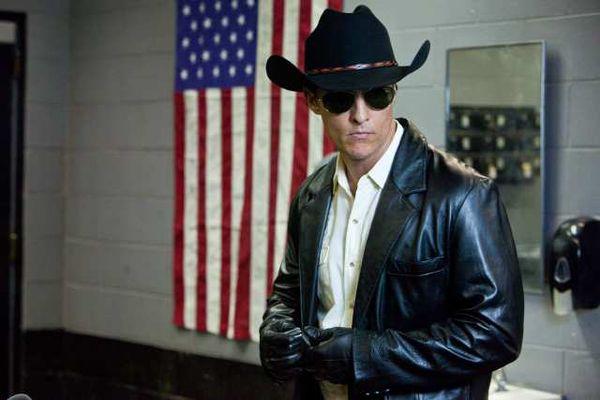 McConaughey stars as Joe Cooper, a Texas police detective, who moonlights as a contract killer.  Joe is very exact in his methods and particular in style, similar to someone like Ryan Gosling’s character from 2011’s Drive, but with a weird side to him.  Joe enters into the lives of the Smith family because of deadbeat, drug dealer Chris Smith (Emile Hirsch).  Finding himself in considerable debt to some people that will kill him, Chris hatches a scheme with his father, Ansel (Thomas Haden Church), to have his mother (Ansel’s ex-wife) murdered, in order to collect the insurance money.  The beneficiary of this money is supposed to be Chris’ sister Dottie (Juno Temple), who appears to be genuinely sunny in disposition, but also slow-witted.  That said, she (as well as Ansel’s current wife, Sharla, played by Gina Gershon) is fine with the plan and willing to split the insurance payout.
Killer Joe is brought in as the man who is supposed to kill the mother (whom we never meet, but should assume is just as awful a person), but has a pretty specific rule involving his payment – an advance is necessary.  The problem is Chris and Ansel are depending on using the insurance money to pay Joe off.  The solution, devised by Joe, is for him to take Dottie as a retainer.  Things only get more warped and complicated as the plot goes on from there. 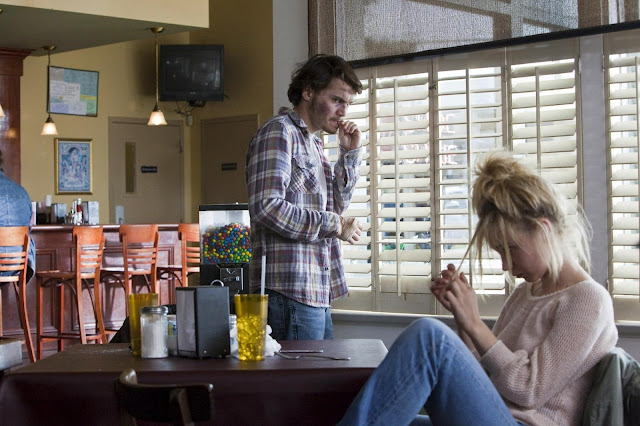 Killer Joe is definitely not a date movie.  This film features a number of scenes that could be deemed as uncomfortable to watch and heads into a third act sequence that involves fried chicken and will take days to shake off, given the imagery.  The film has been rated NC-17 and it is clear as to why.  Even if the rating means the film will not play in many theaters, and even in spite of my objections to decisions made by the mysterious MPAA, Killer Joe is a film that is expressly for adults , but very enjoyable nonetheless.
This cast is great and the dialogue they deliver is this perfect mix of odd quirkiness with foul language frequently injected in.  Were a larger crowd able to see it, Killer Joe could easily be one of the most quotable films of the year.  The dialogue is the reason I am so willing to readily compare the film to work from the Coen Brothers, specifically Blood Simple or Fargo.  There is a sense of rhythm and use of repeated elements that brings a spark to all of these characters and a sense of humor amidst the implications of violence and perversion.  And it all helps that the players involved do a great job. 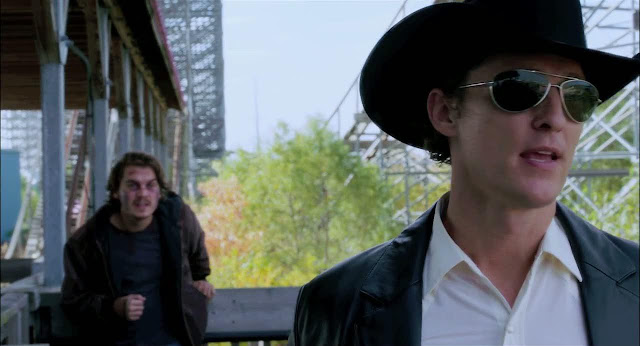 Starting with McConaughey, who has been doing great work within his recent re-immersion into the adult drama realm (see Magic Mike or The Lincoln Lawyer), his work as Killer Joe is electric.  This is a man who is clearly playing a lot very close to the vest, up until he reaches a breaking point that comes late in the film.  His actions are not surprising though, because we see Joe react to certain situations in ways that make perfect sense later on the film.  It should also be noted that, as organized and professional as Joe may try to seem, he is downright creepy as well, which is most apparent given his interactions with Dottie.  The way he mixes his own swagger with the sinister vibes that clearly resonate is a pretty great feat.  This is easily one of McConaughey’s best performances.

Also very good is Juno Temple, who I found to be a mesmerizing screen presence.  Yes, she is attractive and the film is happy to glamorize that fact, but I found her role as Dottie to be quite compelling.  She tells a number of stories about her life, delivered in just the right sense, which evokes a sort of wide-eyed innocence, while also suggesting that this girl has some issues.  The rest of the actors are also faced with various challenges, particularly Hirsch and Gershon, but are well-equipped to have their roles play out effectively.  These are demanding parts for sure, but they are well acted.  And just as a sidenote, while McConaughey and Temple may have given the best performances, Thomas Haden Church was maybe my favorite in terms of how hysterical some of his line readings were. 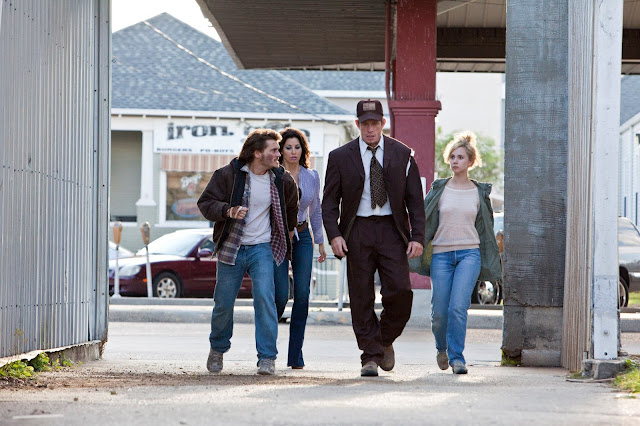 William Friedkin, who has come a long way since making classics such as The French Connection and The Exorcist, directs this film with the right kind of energy.  It is heavily driven by the attitudes of the characters involved and uses the murder plot as more of a situation occurring in the background, having our concentration focus more on this dysfunctional family unit with the addition of Killer Joe.  The look and pace of this film is effective, acting not so much as a slow burn, but a film with lots of strands that eventually come together.  Add to that the dynamic visual style seen from famed cinematographer Caleb Deschanel and editor Darrin Navarro, and the film continues to impress more than disgust, which is certainly a possibility for some who see it.
Killer Joe is a lot of things, with adjectives that mostly lean towards words like lurid, violent, and perverse, but it was also a damn good time at the movies.  It is weirdly entertaining, with an incredibly sharp script that works well to blend redneck sensibilities with wonderfully quirky dialogue.  It certainly helps that the acting is really strong, with McConaughey, in particular, completely nailing his role.  Ultimately, Killer Joe is a wildly entertaining film that is not afraid to roll around in its violent absurdity.  Not for everyone, for sure, but god stuff for those happy to embrace it.

Killer Joe:  No, he wasn’t alright.  He lit his genitals on fire. 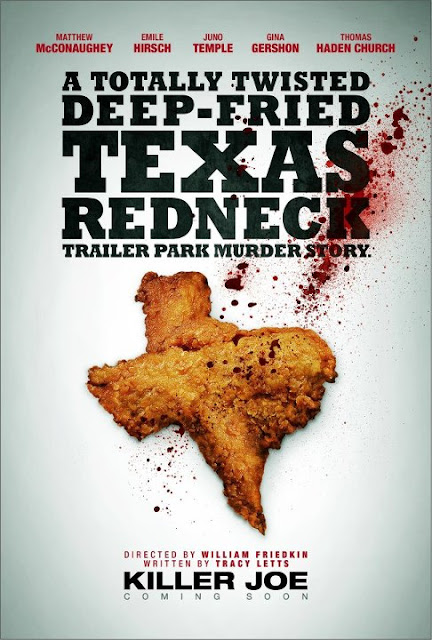