Gear Up For ‘Premium Rush’ (And Wear A Helmet) 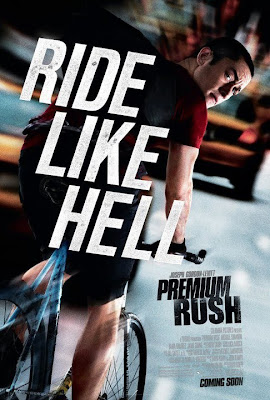 Bobby: If you don't give over that envelope, you have no idea what's coming for you.

Action movies dropping into theaters at the end of summer do not generally inspire a lot of confidence, especially when they are flicks that were moved from the already dead time of year that is January and into the even worse doldrum-like area that is the weeks that hover around Labor Day weekend.  Still, it is always nice to be relieved when a simple, high concept flick ends up delivering the kind of fun you were hoping for.  Premium Rush does not aspire to be anything more than a fun, lighthearted chase thriller and it succeeds in doing just that.  The added plus of properly utilizing its New York location and making me twitch every time a bike got close to crashing only helped the film out further. 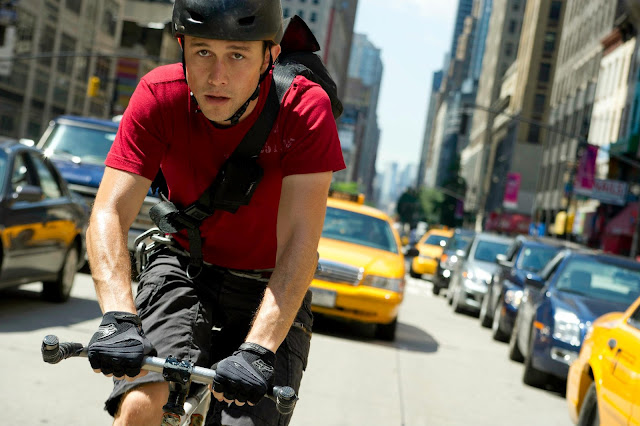 This film is set over the course of one long, exhausting day.  We are mainly following a New York bike messenger named Wilee (Joseph Gordon-Levitt).  Wilee lives his life as fast and free as he can, preferring the life of a guy who gets paid to ride, as opposed to one who has to wear a suit.  This, of course, comes much to the chagrin of his girlfriend and fellow bike messenger Vanessa (Dania Ramirez), but try not to focus too much on that.  What does need your attention is the main thrust of this story, which involves Wilee coming into the possession of a package that needs to be delivered by a certain time, but also brings on the threat of a dirty NYPD officer, Bobby Monday (Michael Shannon), who intends on doing anything he can to take that package from Wilee.  It will now be up to Wilee to pedal as fast as he can through the busy streets of New York to hopefully be able to deliver his package intact and on time.
Premium Rush is co-written and directed by David Koepp, who generally does work as a screenwriter for such blockbusters as Spider-Man and Jurassic Park, but every now and then gets the chance to write and direct his own small, high concept genre films.  With small films like Stir of Echoes and Ghost Town under his belt, I tend to like the films Koepp gets to do himself, because they always seem to rely on somewhat formulaic stories that turn into entertaining flicks nonetheless and Premium Rush is no different.  There is a fairly generic story here (too much explanation of things for my liking actually), with an A to B plot projection, and only one inevitable outcome possible, but the film is made with the right kind of energy and the right actors to pull this off. 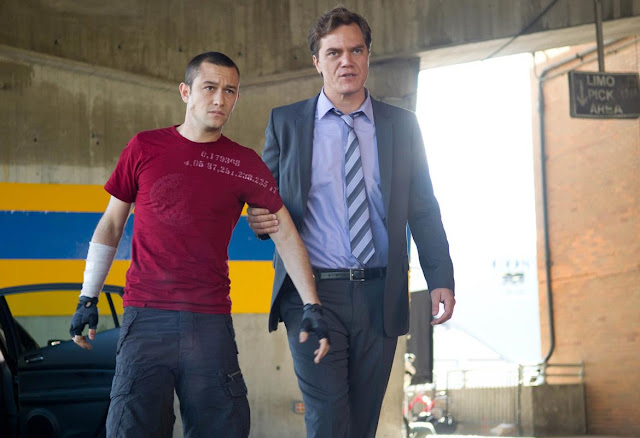 Joseph Gordon-Levitt is perfectly fine in the lead role.  He is a charismatic presence with the right kind of physicality to make you think that he is probably pretty capable of doing all of this bike stuff himself.  Given that Gordon-Levitt has been attached to a number of darker projects (regardless of his generally lighter presence), it is nice to see him in a film that revolves around him just wanting to ride his bike.  As Wilee’s adversary, Michael Shannon is also a lot of fun here.  Given that I was plenty happy to praise Shannon’s performance in 2011’s Take Shelter as one of the best performances of the past decade, the fact that he gets to cut loose as a villain feels refreshing as well.  He is basically a stressed out guy who gets in over his head and has to resort to some drastic measures, but even as the drama surrounding his dirty cop character unfolds, it continues to be a fun sort of role that works for this chase story.
The film plays very much like a cartoon of sorts and ends up being a lot funnier than people may expect, based on how it is being sold.  That should not come off as a detriment to the film either.  It should be funny and fun, rather than tough and serious.  We are talking about a bike messenger-centric chase thriller after all.  Really, the film is so simplistic, that the true message really boils down to “not giving into The Man” and “making responsible decisions, but not taking the restrained path”, etc.  It just doesn’t hurt that the film relays these thoughts by letting us see fun bike action, while the bad guys attempt to catch up in there ‘totally lame cars…dude’. 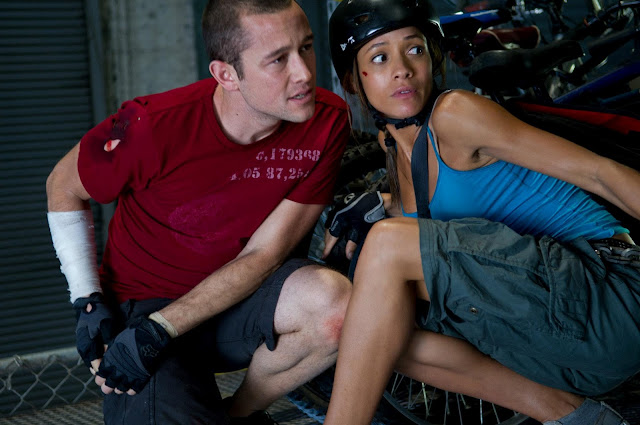 Shooting within the congested streets of New York, the film is benefited by some solid action filmmaking in the way it knows how to keep me involved with the constantly moving action.  While I am sure stunt doubles and some digital trickery was used along the way to better put many of these bikes closer to the cars they are constantly almost hitting, it did not put me off from seeing them in action.  The action is well shot and had me caught up in the moment constantly.  The fact that the film brought a certain level of variety to the bike-related action was fun as well.  Add to that an upbeat soundtrack and some tight enough editing and you have a film that flew by quick enough, while keeping me entertained during the ride through it.
Premium Rush accomplishes the task of being a fun ride through New York without striving to be anything more than it needs to be.  Although, I guess I can take that back slightly.  Gordon-Levitt and especially Shannon are quite entertaining in the film, which does a lot to have me look past the formulaic structure and the inherent silliness in the concept to begin with.  But hey, this is a movie about a bike messenger being pursued by bad guys through New York traffic.  That sounded like fun for me to begin with and I was happy to be able to watch a movie that succeeded in delivering just that, with exciting bike action to make it worth it as well.  I just hope everyone involved in making the film scored a water bottle during production, because all that pedaling looked incredibly tiring.

Wilee: I like to ride. Fixed gear. No brakes. Can't stop. Don't want to, either. 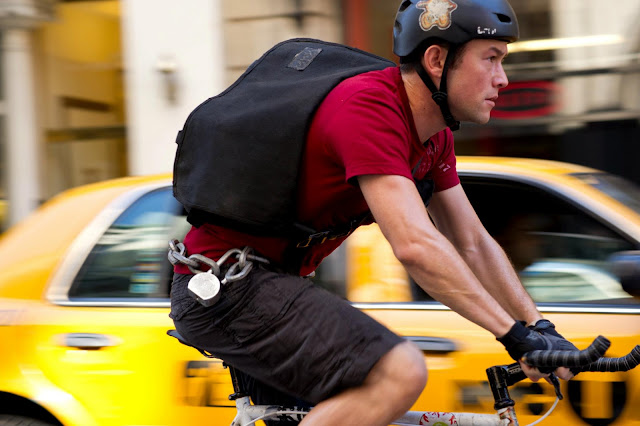 Aaron is a writer/reviewer for WhySoBlu.com.  Follow him on Twitter @AaronsPS3.
He also co-hosts a podcast, Out Now with Aaron and Abe, available via iTunes or at HHWLOD.com.
By Aaron Neuwirth
2012 Films Action Adventure Dania Ramirez David Koepp Joseph Gordon-Levitt Michael Shannon
Reactions: