Here Comes ‘The Watch’ And There Goes The Neighborhood 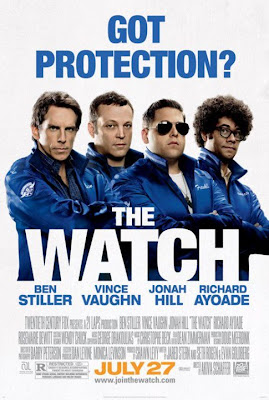 [While looking at green, alien slime]
Evan:  Wait a minute, I’ve seen this stuff before.
Franklin:  Had he just won a Nickelodeon’s Kids Choice Award?

I am all for a good comedy and fun & games, but I do also appreciate when the pieces of a film, no matter how initially scatterbrained, eventually work out within the realm of logic that said film has established.  The Watch is very funny in various moments, because it features funny people getting to say and do funny things with each other, and I am sure the blooper reel is probably hilarious.  That said, the film, as a whole, is really messy and does not come together in a way that could be considered clever or successful in a way that would make me find the film to be memorable.  Bits of it work really well and put it in the league of Ghostbusters, but by the end, it really just turns out to be more like Evolution. 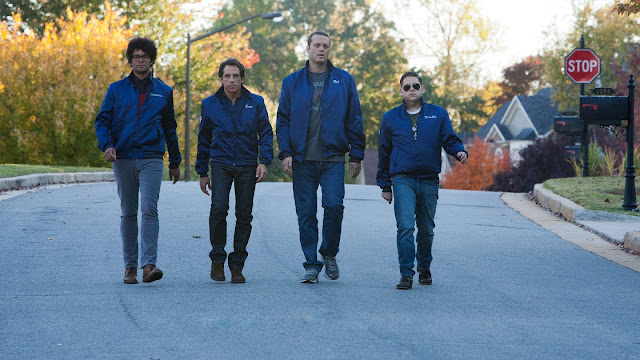 The setup is a fun idea.  Ben Stiller is Evan, a married suburban resident and Costco manager, who has taken to forming various groups and organizations around town.  Early on, one of his employees/friends is murdered rather gruesomely, which leads him to forming a neighborhood watch.  Three people join ‘The Watch’, including Bob (Vince Vaughn), a married father, just looking to have a good time; Franklin (Jonah Hill), a high school drop-out and rejected police cadet; and Jamarcus (Richard Ayoade), a Brit looking to find some pleasure, during his tour of duty on The Watch.
The Watch accomplishes little at first, with Evan mostly being annoyed that the others are not taking it as seriously.  However, the group soon discovers, of all things, an alien threat.  Aliens exist and are apparently among the people within the bounds of The Watch’s territory.  It will now become a much larger problem that will need to be taken care of by a very inept group of fun guys with sweet jackets. 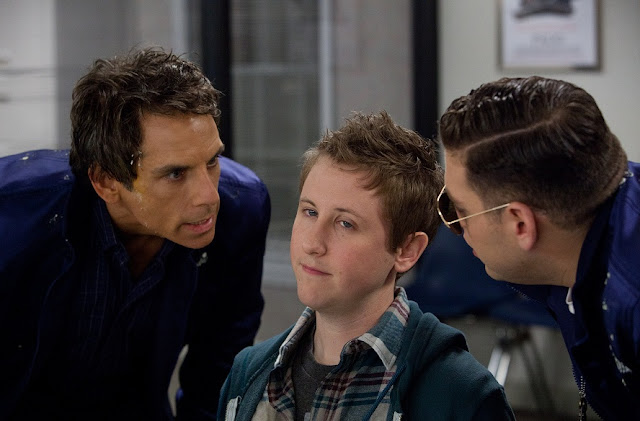 What becomes problematic for this film is that it mostly amounts to having a scene that requires some sort of plot momentum, which is then followed up by the guys riffing with each other for an extra five minutes, before moving on.  Now, it is fun enough because the stuff these guys say and the way they bounce lines off of each other is quite funny and the chemistry between all of them is strong.  Where I take issue is how the film does not utilize these banter moments as anything other than pointless comedy, separated from the rest of the film.  There are better comedies that know how to meld the various comedic riffing sessions into something that finds a way to be a part of the story or at least furthers along the development of the characters.
Now as problematic as watching The Watch just hang around and make jokes, before lazily advancing the plot involving invading aliens may be, I did like this cast.  In particular, I really enjoyed Vince Vaughn, who I do not think I have enjoyed in a movie in quite some time, which is unfortunate, because I think he can be really funny.  In The Watch, Vaughn plays a character who is a genuinely nice person.  He wants to do what is right, but also have fun in the process, and is also one who supports the right idea.  Ben Stiller is fine as well.  You can boil it down to saying he’s playing a familiar ‘Ben Stiller-type’ role, but he does commit to the role he is in.  It is a shame that certain motivations surrounding his character have a level of drama that would be more effectively served in a better film. 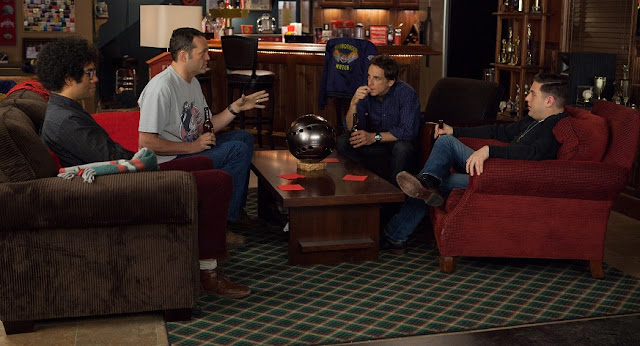 As for the other members of The Watch, Jonah Hill is fairly solid.  He still acts as the guy that yells loudly to emphasize jokes at times, but given that he is no longer “the fat guy who yells loudly to emphasize jokes,” I did like the version of his role being that of a wild card that carries around a butterfly knife.  The last character, who will be new to many, but a stand out to fans, is Richard Ayoade, who does amazing work as a man who provides the driest, most English readings of jokes that would be less funny otherwise.  Ayoade, who is most famous for his work on the BBC series The IT Crowd and was writer/director of the wonderful comedy-drama Submarine, kills in all of his scenes, regardless of how poorly developed some of the aspects involving his character are.
The movie really is constructed in a cumbersome sort of way.  Originally written by  Jared Stern, with Shawn Levy set to direct, the film really feels like it originally was going to be more like a Night at the Museum-type film, before being re-written by Seth Rogen and Evan Goldberg and directed by Lonely Island member Akiva Schaffer (of Hot Rod and SNL Digital Shorts fame).  The final product feels like an adult-oriented comedy with the spirit of a film aiming for a younger audience.  The direction is erratic at times, veering between having horror elements, to plain comedic bits, to overly stylish action moments, but not in a humorously consistent way to suggest a good satire or parody.  Similarly, the script is very goofy, but attempts to put in stakes that just don’t work well enough to feel either like a parody or as if the world is really in danger.  I did come in expecting a pretty silly movie to begin with, but my problem is that the film is less about maintaining a certain a logic and more happy with just not caring. 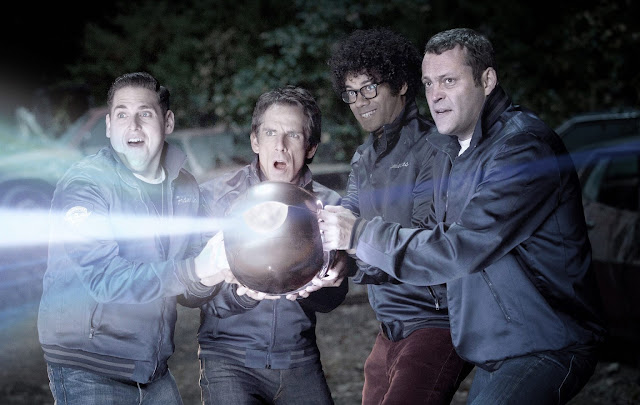 Last thought, I was really bothered by the amount of product placement in this film.  This is not an element that normally stands out to me, but The Watch felt incredibly blatant in having so much product placement seen throughout the film.  From the use of Costco, to the incredibly specific beers constantly seen, the film is wall to wall ads, which ended up being very distracting.
I may be picking on this movie more than need be, but it is because there is some really good stuff in it and the premise is fairly solid.  I can admit I was initially happier with just the concept of having a comedy with this cast that revolved around a neighborhood watch and was taken slightly aback when I found out aliens were involved.  That said, there was a lot to go on here and I just wish the film did not end up seeming so unmemorable.  It is another case of good cast, unfortunate results; though the movie does have a lot of crowd-pleasing bits.  Still, even with the injection of plenty of R-rated shenanigans, the film does not do enough to build off its high-spiritedness.

Sergeant Bressman: Stay with me!
Bob: His heart's out of his body fella, I don't think he's gonna make it. 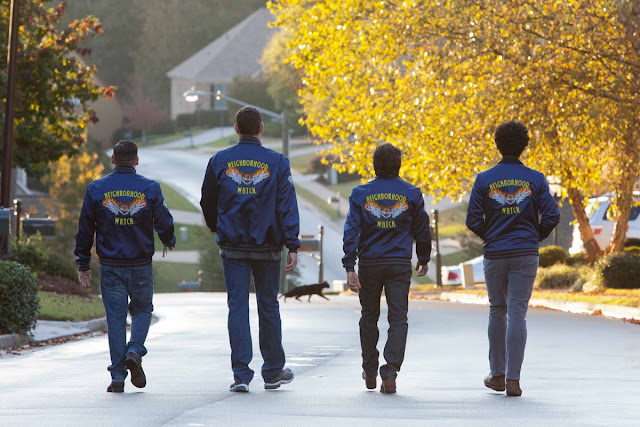