‘Piranha’ Doubles The Ds And Lowers The Intelligence 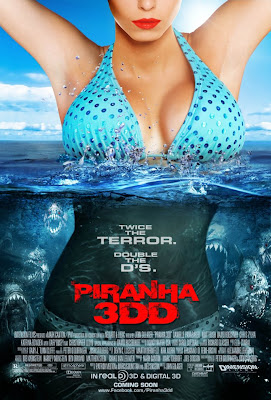 Well I did not think I would be writing a review that would come to the defense of Piranha 3D, but its god-awful sequel Piranha 3DD certainly necessitates some attempt to separate the two.  While one may scoff at the 2010 horror-remake, that film at least knew how to deliver on almost every level that it tried to.  Piranha 3DD fails spectacularly at being anything that resembles horror, comedy, sexy, or basic, intentional entertainment.  The film is only a step or two up from those terrible excuses for parody films (Meet the Spartans, Disaster Movie, etc.) and really requires the aid of some friends who want to equally try and make some good out of a film that is so bad.  Still, try as we did, nothing good came from what we saw, as Piranha 3DD only delivered one ‘D’, which stands for dumb. 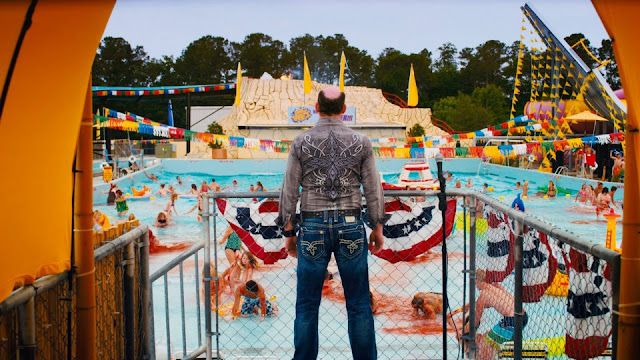 Picking up a year after the massacre that occurred at Lake Victoria in the previous film, Piranha 3DD takes place in Merkin County, AZ (yep) at a nearby area, occupied by a water park that is soon to have its opening day.  In this same area, two farmers (one is played by Gary Busey) manage to accidentally release eggs laid inside of a dead cow in a lake, which leads to the birth of a new swarm of deadly, prehistoric piranhas.  Of course, the concept of water parks and piranha’s will collide, but I am getting ahead of myself.
The water park, known as ‘The Big Wet’, is being run by the sleazy Chet (David Koechner), who has hired water-certified strippers to serve as life guards, as the water park is going to have more adult-oriented areas, in order to drive up business.  This puts Chet at odds with his step-daughter Maddy (Danielle Panabaker), a marine biology student, who shares ownership of the park.  Various other lame and unimportant things occur, including the establishment of several of Maddy’s horny friends, before we find out something that matters – the water park is sharing a connection with the lake that is going to lead to a lot of piranha getting in and ruining the opening day of the park.  Hopefully Maddy and her idiot friends can do something to stop massive chomping from happening. 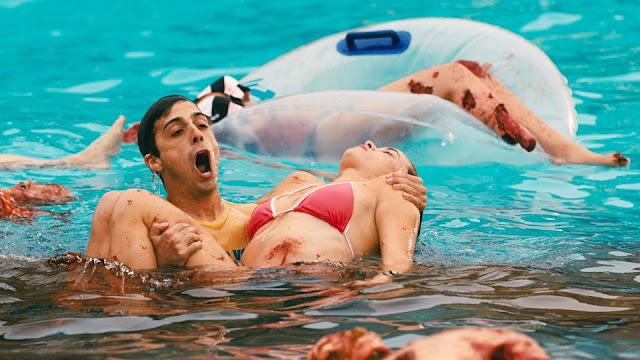 It is honestly kind of depressing to write about how awful this film is.  It is a shame, as my review for Piranha 3D was apparently quite popular.  This time around, however, I just do not have the same strength to apply to a film that clearly did not try very hard.  Opting to instead rest on whatever laurels it thought it may have had, Piranha 3DD’s biggest problem is that it makes the concept of deadly, prehistoric piranha attacking people (many of them nude) in a water park, in 3D seem boring.  Gone is the moderate amount of cleverness of the previous film and in full gear is the self-awareness, which becomes much too much for this film to handle, when the writing is so sub-par to begin with.
This film has been put together by the writers/directors of the low budget, cult horror film series Feast.  Despite not having the previous film’s director, Alexandre Aja, who really gave the film the type of violence and chaos it needed, I at least thought the people in charge of the Feast series (I have only seen the first, but there humorous and horror sensibilities seemed clear to me) would be able to deliver a favorably comparable experience.  I could not have been more wrong, which is disappointing, as I have seen these people play around with expectations before, but with Piranha 3DD, there was a lot of effort seemingly placed exclusively around going through the motions and hitting all the obvious jokes, as opposed to really trying for something.  I am not trying to ask for a deeper experience than need be with something like Piranha 3DD, but I have already seen the right way to do a film like this, which is not what happened here. 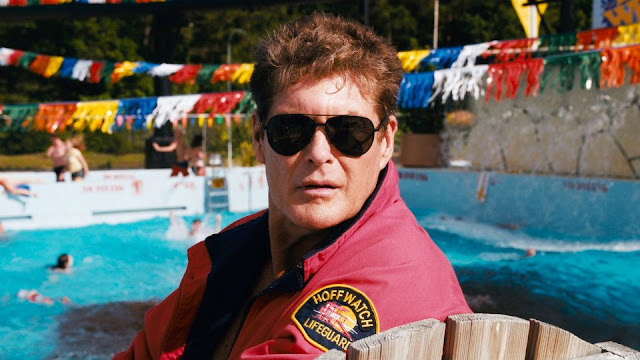 One of the biggest offenses is frankly how tame the film felt.  The previous film eventually became a nightmare of piranha-related carnage that left so many different types of kills and various bits of bodies all coming apart on screen; not to mention the ridiculous amounts of nudity, as if to say, “Yeah, we’re just that lude.”  Piranha 3DD seems to wimp out from going crazier, which is strange given the tendency for sequels to go bigger and even stranger, given the potential that comes with having a water park at the filmmaker’s disposal.  Instead, we get an extended cameo appearance from David Hasselhoff as himself and a film that waits until the 55-minute mark to unleash a moderate amount of piranha-related terror on a larger scale, before ending at the 70-minute mark, followed by 13 minutes of credits (not kidding).
It is strangely funny how everything about this film is how many would have thought the previous one would have turned out.  Piranha 3D was a lot of things and gratuitous was definitely one of them, yet it somehow made that film admirable in so many ways that Piranha 3DD is not.  The previous film managed to deliver spectacle in the form of copious bits of gore and nudity that was creative, humorous, and dare I say subversive (in the most basic ways) at times.  Despite the sequel having seemingly more of a budget to work with and I would imagine some clout given that the first film was somewhat of a surprise hit (monetarily and critically), it takes so many steps back in failing to deliver a bigger and better experience.  This is a film that flounders away its potential and settles for bigger boobs, yet weaker everything else.

Shelby:  Josh cut off his penis because something came out of my vagina. 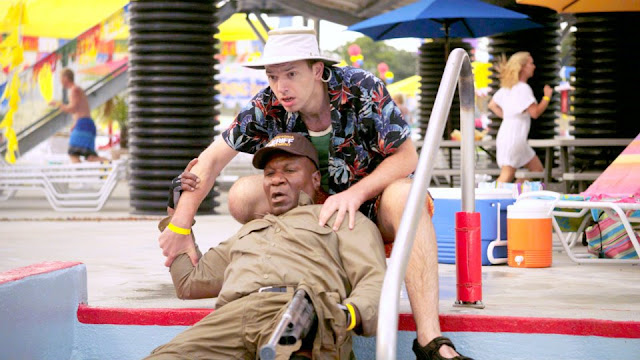