The Exotic Adventures Of ‘Magic Mike’ Part 1: The Tampa Strip 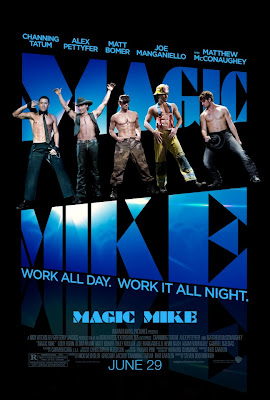 Within the past year, director Steven Soderbergh has directed three very different films.  First was the biological disaster drama, Contagion; then there was the throwback action flick, Haywire; and now we have Magic Mike, a comedy-drama based around a group of male strippers in Tampa, Florida.  One thing is for sure, Soderbergh likes to dabble in different genres.  Given that I like to follow along with directors I admire and the fact that the last male-stripper movie I saw was The Full Monty, which is a film I really enjoy, there really seemed to be no reason for me not to want to see Magic Mike.  So I went to a screening, which was a packed theater, full of women, ready to see a bunch of hunky guys dance around on stage.  True to expectations, Magic Mike was more than just colorful exploitation, as it used its likable cast to provide a film that had humor and drama…along with assless chaps.

Loosely based on true events from Channing Tatum’s own experiences as a 19-year old dancer/stripper, he stars here as Mike, a self-assured entrepreneur with many different businesses being ran at once.  He does work in construction and carpentry, with aspirations of having his own custom furniture business.  Working towards that though, Mike’s most monetarily beneficial profession is as an exotic dancer at a male strip club.  Mike is pretty much the star of the club, but has plenty of support from the others, including his boss, Dallas (Matthew McConaughey), and the other strippers played by Matt Bomer, Joe Manganiello, and Kevin Nash.
The main narrative has a new guy, Adam (Alex Pettyfer), come under the wing of Mike, who he introduces to the lifestyle he’s involved in.  Embarrassed at first, Adam (referred to as “The Kid”) quickly becomes accustomed to life as a stripper, which includes women, money, and other excesses that could lead to a downward spiral.  At the same time, Mike forms a new relationship of sorts with The Kid’s sister, Brooke (Cody Horn), who just wants to make sure her brother is alright.  Drama unfolds, as the story carries on, but there are also plenty of wild and well-choreographed dance numbers to keep things moving. 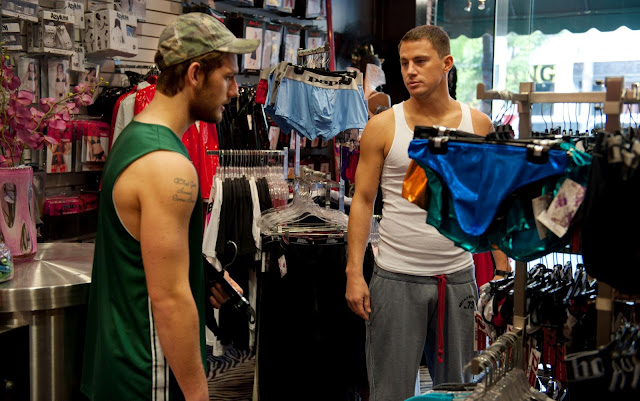 The movie theater I saw Magic Mike in was packed for a reason and does manage to deliver on what was set up in the trailers.  There are plenty of wild and colorful dance numbers, with plenty of ridiculously handsome men showing skin on stage.  Still, the film also managed to have the other elements that I expected, which made it a movie worth watching and enjoying for other reasons.  I was not surprised to not see “From Steven Soderbergh, the director of Traffic” in any of the ads and the film certainly was not going for a very dark sort of tone, but it still fell right in line with Soderbergh’s ability to take well-worn plots and add his own sort of experimental stamp to them.
A key success for Magic Mike is its cast.  Three performances in particular make this film really work.  It has already been established that this is the big year for Channing Tatum.  Even with G.I. JOE: Retaliation being pushed to next year, Tatum has still already found success in 21 Jump Street, The Vow, and the previous Soderbergh film this year, Haywire, which have turned him into a screen presence that I welcome seeing.  The guy is likable, with comedic chops that allow him to make fun of himself, let alone the fact that the dude can dance.  It does not hurt that his attempts at drama are fine, regardless of how successful the romantic aspect of this film may or may not be. 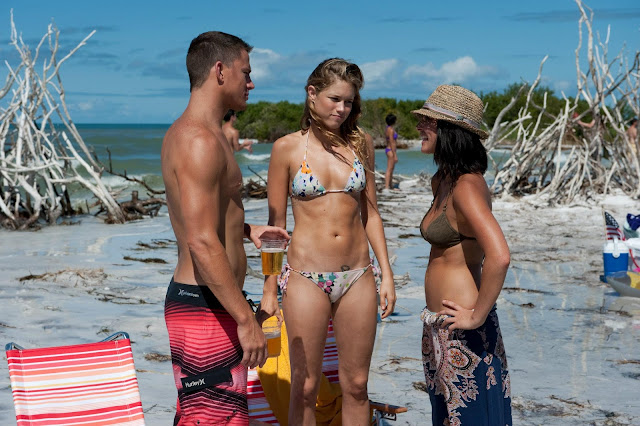 Another key performance is Pettyfer as The Kid.  While the film is called Magic Mike, Adam does serve as the co-star of the film, whose journey is just as interesting.  It is essentially a rise and fall story, with The Kid becoming an instant success, only to be caught up in the harmful effects of more elicit behavior.  What helps is that the film does not turn these plot points into over-the-top melodrama and Pettyfer’s performance is good in portraying self-destruction effectively, but not overblown.  The last key performance is McConaughey, who steals every scene he is in.  This is the kind of role that is perfect for McConaughey, as it allows him to revel in the associations made with his persona (he brandishes bongos at one point in the film), while also effectively portraying a man who knows exactly how to sell a product, which in this case happens to be the sex appeal of himself and his fellow dancers.  He steals scenes based on his actions and dialogue and looks comfortable doing it.
The second half of the film does work its way down into darker territory and slows down the pacing of the film overall, but the relaxed nature of the first half makes it worth it.  Yes, the dance scenes will be a highlight for many, but there’s something to admire in the way Mike, Adam, and Brooke have various conversations that are fun, flirty, and not focused on anything too specific, beyond the idea of just having these characters and others hang out.  The digital photography work is solid, creating a unique and good looking film, when it steps outside of the club and Soderbergh, in true form, also manages to make the behind-the-scenes of the world of male-stripping interesting by way of showing us the ins and outs, how the business aspect is handled, and other pieces that add enough to the proceedings. 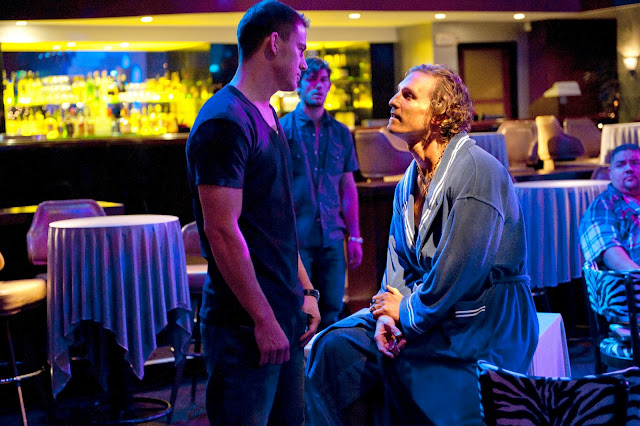 Similar to the recent release from Woody Allen, To Rome with Love, Magic Mike is not quite Soderbergh firing on all cylinders as a director, but it is an enjoyable picture that is aided by its solid cast, loose dialogue and story rhythms, and the decision to go all out on the exotic dance numbers.  It gives the people what they want, based on how the movie was sold, but doesn’t skip out on being about something more as well.  Tatum continues to prove himself as a guy who can hold a movie on his own, McConaughey gets to play up the joke and have a lot of fun taking his shirt off, and the film, overall, is a bit long, but good entertainment…especially for those wanting to see a parade of man-thongs.

Brooke:  Wow.  That's a lot of ones.
Mike:  There are some fives in there.
Brooke:  Oh, ok. No twenties?
Mike:  Oh, you don't wanna know what I have to do for twenties.