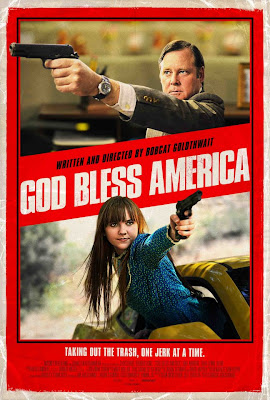 Frank: I wish I was a super-genius inventor and could come up with a way to make a telephone into an explosive device that was triggered by the American Superstarz voting number. The battery could explode and leave a mark on the face, so I could know who to avoid talking to before they even talked.

I have seen and heard a lot of Bobcat Goldthwait lately, as he has been promoting his newest film, God Bless America.  Having retired from stand-up comedy nearly a decade ago, with his eyes set on being a filmmaker, he’s since made some interesting (and quite good) dark comedies; including Sleeping Dogs Lie and World’s Greatest Dad (Robin Williams is great in that movie).  I like Bobcat Goldthwait.  Listening to him now, he is very honest, funny, and brash in a good sort of way.  It is unfortunate that God Bless America is not a better film.  It certainly has a lot on its mind in regards to the state of America’s fascination with reality television, among other things, but the film does not come together as strongly as it could.  There are enough good bits in it overall to make it something worth checking out for a person that wants to enjoy a decent dark comedy/satire, it just could have been more. 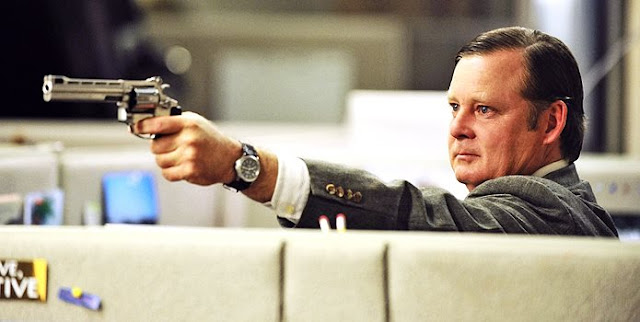 The film stars Joel Murray as the ever-embittered Frank.  That may be a bit strong.  Frank has been having it rough dealing with what the rest of the country seems to enjoy.  We get a glimpse of all the nonsense Frank tries to avoid, as he skips through a bunch of reality TV shows (not too far removed from ones that actually exist), while up late due to his annoying neighbors putting in no effort to keep their baby quiet.  During one terrible day, we see the extent of what Frank puts up with.  On this day, Frank first tries to deal with his ex-wife and his spoiled daughter, who wants no involvement with her father, because he is poor.  Later, after ranting about how stupid reality television is, Frank is fired from his job and diagnosed with a brain tumor.  As I said, it is a terrible day.  After Frank arrives back at home, he decides that maybe suicide is his only escape.
Before pulling the trigger, however, Frank makes a decision.  In the process of planning to kill himself, Frank had the television on and watched another reality show where a teenager threw a tantrum because her parents would not get her exactly what she wanted.  Figuring that he has nothing to lose, Frank decides to steel his neighbor’s sports car and drive hundreds of miles to kill this teenage girl, before killing himself.  Frank succeeds in the first part of this plan (with some bumbling in the process), but before he kills himself, he is interrupted by Roxy (Tara Lynne Barr); a teenage girl who saw what Frank did.  She thinks he could do more “good” by taking out other “not so good” people, and bring her along to help.  Therefore, the two set out on a bizarre road trip/killing spree across the country. 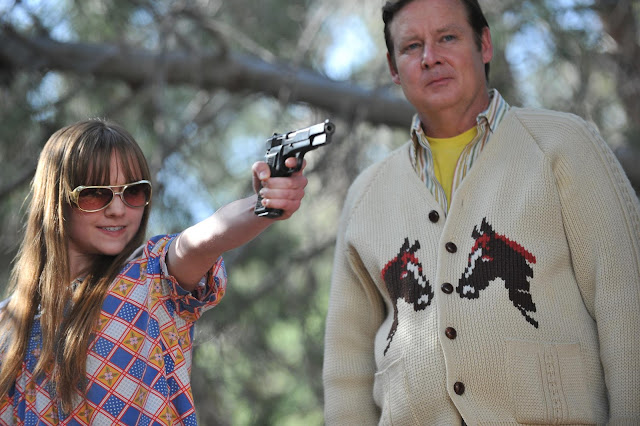 The problem with this movie is how it does not really settle on anything, as opposed to simply providing sequences where characters can openly rant about what they hate about society in general.  Goldthwait, who wrote and directed this film, seems to clearly enjoy having a platform of sorts to really go into why he finds reality television and a lot of what goes on in American pop culture to be insipid and dumb.  Unfortunately, the film just feels like many various rants, with obvious setup for when these rants will occur.  Goldthwait’s past films have tended to start out with some key ideas, only to reveal themselves as something more introspective.  God Bless America does not really get to that place.  It just continues along the same path for the duration of its runtime.  However, it does help that, despite being a series of rants and murderering mayhem, they are entertaining rants and scenes of murdering mayhem.

Roxy: You really had the chance to do something awesome here. But you're blowing it, Frank. Now you're just gonna be remembered as some creepy old stalker dude who was in love with some young twat on a television show. Just a pervy old dude that killed that girl and then himself when he couldn't have her.
Frank: I didn't kill her because I couldn't have her. I killed her because she wasn't nice.

While something like Oliver Stone’s Natural Born Killers may have done what this film has attempted nearly 2 decades ago, there still is a sort of twisted joy in seeing a deranged couple (they’re friends, nothing more) go off and provide a kind of sick wish fulfillment of having obnoxious and mean people get a comeuppance of sorts.  I am of course not in support of murdering people because I do not like them or am annoyed by them, but in the realm that this film exists, there are some funny, exaggerated sequences that depict this.  ‘Exaggerated’ is a good term to stick with too, because this film really does not exist in a real life sort of world.  It is exists because of a convenient screenplay, as opposed to being something grounded in reality, which is to both the film’s benefit and its detriment.

It helps that the two main performances are quite good.  Joel Murray does a great job at embodying a man who does not necessarily think he is better than anyone is, but does feel he has the right to speak against the stupidity of a lot of what the country seems to enjoy.  This role could have been played with a much darker cynicism that would have sucked the fun out of this movie, but Murray’s take on the performance does well at combining his sad sack nature with an angry, but likably warm presence.  There could have been more development for Roxy’s character, but at least Tara Lynne Barr’s performance brings a fun character for Frank to interact with.  Combining that with her psychotic pleasure that she gets from offing the idiots and hate-filled folk of the country (which is encapsulated just as much in her grin as it is in her actions) allows the movie to at least move along at a breezy pace.
The other movie I could refer to, which this film may owe a bit to, is perhaps one of the best films from Joel Schumacher, Falling Down, with Michael Douglas as a man who goes on a violent rampage during particularly hot day in Los Angeles.  That film tackles many similar issues, but was better for really delivering on the main character and having the story be about something overall.  God Bless America does not quite get there.  It has many scattered moments drenched in satire and likes speaking out against things going on in America currently, but it does not really wrap up into a story that completely comes together.  It is still a bit of fun; a twisted dark comedy, with a couple memorable moments, but the film does not amount to more than just an average story.

Frank:  [after finishing shooting practice] You did a good job.
Roxy:  I have a good coach. That and I was pretending the targets were the cast of Glee.

Note:  After writing this, I heard in a hilarious interview with Bobcat Goldthwait that he hates Falling Down.