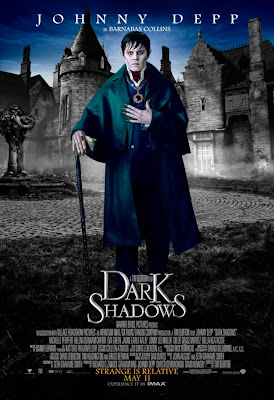 Barnabas Collins: How soon can the horses be ready?
Elizabeth Collins Stoddard: We don't have horses, we have a Chevy.

Dark Shadows is a movie that has everything it needs to be a lot of fun, but ends up being too hit or miss to fully succeed in the end.  The film has a great cast, some very impressive production values (fitting for a Tim Burton film), and an initial setup for a story that could have lead to some interesting places.  The setup is strong, yes, but the film ends up being too messy in regards to handling all of its many subplots and characters.  This would not be all too bad a thing if the film was at least constantly entertaining, but unfortunately, there are also various problems with how well established the characters are and how well the comedy works.  Johnny Depp certainly tries hard, but the film is too messy and unfocused to really amount to much more than a forgettable, gothic jaunt. 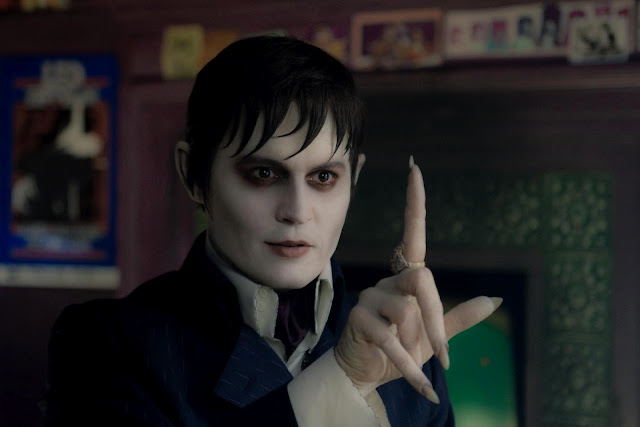 Based on the cult classic soap opera of the same name, which ran from 1966-1971, this theatrical adaptation of Dark Shadows stars Johnny Depp as Barnabas Collins.  We learn early on that the Barnabas’ family helped developed the town of Collinsport, Maine and he was the master of Collinwood Manor, up on Widow’s Hill.  During his time as a playboy, Baranabas makes the mistake of breaking the heart of Angelique Bouchard (Eva Green), a witch, in favor of another woman, Josette (Bella Heathcote).  As a result, Angelique curses the Collins family and forces Josette to jump off a cliff.  Barnabas attempts to kill himself, but finds that he has been cursed to be a vampire and live for an eternity.  To make matters, Barnabas is buried alive in a chained-coffin by angry townspeople.
Nearly 200 years later, Barnabas is finally released from his prison and makes his way back home.  Upon returning, he finds a few remaining members of the Collins family still residing at the manor.  This includes the family matriarch, Elizabeth Collins (Michelle Pfeiffer); her brother Roger (Jonny Lee Miller); Elizabeth’s rebellious daughter Carolyn (Chloe Grace Moretz); and Roger’s son David (Gulliver McGrath).  Also at the house, Elizabeth’s hired live-in psychiatrist, Dr. Julia Hoffman (Helena Bonham Carter); the manor’s caretaker, Willie Loomis (Jackie Earle Haley); and the new governess, Victoria Winters (played by Heathcote again), seemingly a re-embodiment of Barnabas’ lost love.  As Barnabas attempts to adjust to life in the 1970s, which includes restoring the family name, things become much more complicated as Angelique is still in town and still hopes Barnabas has a change of heart, even though she’s cursed it for all time. 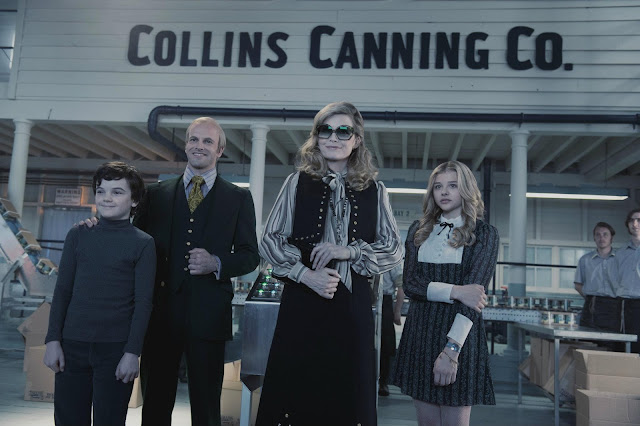 I have no issue with the fact that director Tim Burton, Johnny Depp, and Helena Bonham Carter continue to work together.  If they all get along and like making movies together that is fine.  I actually think the movie is benefitted by the presence of these people.  Depp brings a lot to the role of Barnabas Collins, with his best scenes in the film revolving around the fish out of water notion of him being a very old-fashioned man/vampire now stuck in the 70s.  Bonham Carter has a smaller role, but I did enjoy what she tried to do with her character, despite some of her motivations feeling a little undercooked (a common problem with the characters in general, which I’ll get to).  Then you have Burton, who at least makes this film feel like something clearly in his wheelhouse.
Regardless of how much one likes Tim Burton’s work as a filmmaker, one of his greatest accomplishments as a director is the fact that he is one of the few current filmmakers whose stamp someone can instantly recognize.  With Dark Shadows, while not even close to being one of his best films, Burton at least seemed to be able to inject a lot of his personality into an expensive looking studio feature.  Pale faces, gothic interiors, an almost too colorful town mixed with a darker setting outside town (akin to Edward Scissorhands), and of course, the Danny Elfman score (which is forgettable) all do a lot to make this feel like a Tim Burton film, but also apply an effective amount of style to the feature.  Burton seems more involved here than he did on Alice in Wonderland, which was nice to see, but unfortunately, there were still issues with how this film was structured. 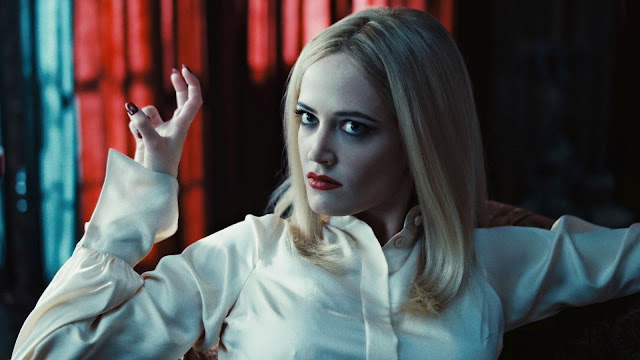 Basing this off a soap opera that had 1000+ episodes, there was certainly plenty of story to cull from, but unfortunately the story by John August (Big Fish and other Burton films) and Seth Grahame-Smith (Abraham Lincoln: Vampire Hunter) is excessively busy, despite having many characters that do not add much to the story.  Despite having a great cast, the majority of them are only defined in very broad terms and we learn very little about them.  For example, Jonny Lee Miller is defined as greedy, Jackie Earle Haley is a drunk, and Michelle Pfeiffer simply exists as the head of the family, but has little else to do beyond believe in the family.  The other characters that we do learn a bit more about mostly have developments that either come too late in the film or do not amount to much that is interesting.  Namely the Victoria Winters character, who seems to be introduced as the lead female character of the film, before disappearing into the background for a good majority of the film.
Fortunately, Eva Green at least seems to be trying to have a lot more fun, which is nice given that I do not think I have ever seen her smile before this film, as Cheshire Cat-like as it may be.  She provides a level of menace that is welcome and shares one of the film’s funnier sequences, involving Depp and a full use of one specific room.  I also enjoyed the interactions between Depp and Chloe Grace Moretz, which was a good way to emphasize the massive generation gap.  Again, no one is particularly bad in the film, there are just a lot of instances where characters are not given much to do or written too thinly to make us care for their parts of the story. 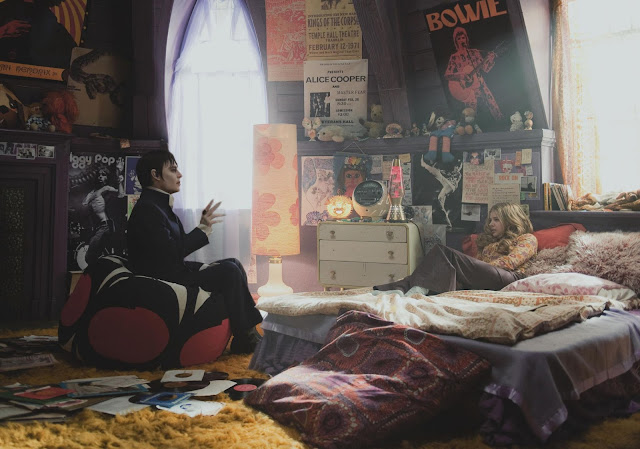 The story plays out awkwardly as well and not at a decent pace.  I felt a lot of drag in various points during the film, which was not aided by the fact that the humor could be very hit or miss at times.  The attempt to really balance the campy tone and dialogue with some of the film’s darker sensibilities unfortunately did not pay off as well as it has in other Burton films where the macabre and the comedy felt like a more natural mix (i.e. Sleepy Hollow or even Beetlejuice).  If Tim Burton wanted to reboot the actual TV show (direct the pilot, scale down the star power, expand the story), I could have easily seen this working out better, but as it stands, there are just a lot of good elements not coming together to really deliver on the promise of the idea of turning this show into a movie.
Dark Shadows is certainly not an insult to its TV counterpart (I watched a few episodes, so I am not speaking blindly), it just feels like many good ideas did not come together quite right.  Johnny Depp is good, as one would expect, but why couldn’t I get to see more come from his perception of Alice Cooper?  Why did I not care more for Victoria?  What else was going on in Collinsport.  Too much of what this film showed me ended up not being interesting enough, while many people involved in this film ended up not having enough to flesh out what had been vaguely developed.  I will continue to entertain the idea of Burton and Depp working together; I just hope we get more interesting stories (hopefully original ones) to sink our teeth into in the future. 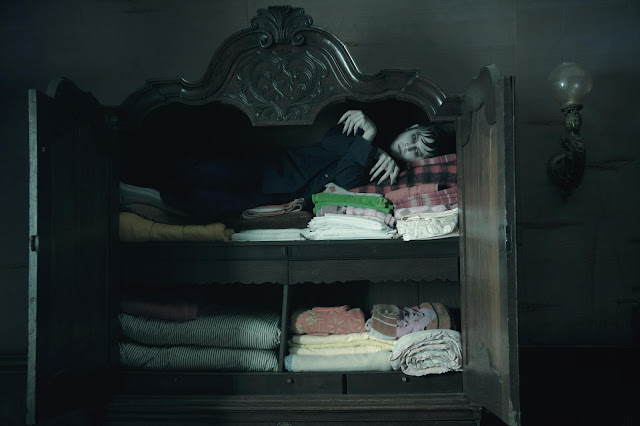