‘The Lorax’ Is Certainly A Colorful Film... 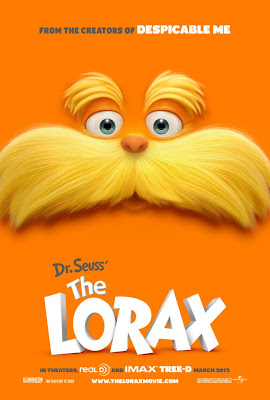 The Once-ler:  Little did I know, I had just summoned a mystical creature as old as time itself.  The legendary, slightly annoying, Lorax.

I was kind of excited about this one.  That’s saying something in my eyes, as I have yet to really enjoy a full length Dr. Seuss feature film.  How the Grinch Stole Christmas was pretty forgettable, I try not to talk about The Cat in the Hat, and Horton Hears a Who was a step in the right direction, but they all suffer from the same problem.  Dr. Seuss’ books simply were not really meant to be stretched into 90-minute films.  Sure one could feasibly write enough new material to keep things interesting, but that still has not really worked.  The Lorax is the latest attempt at this, but once again, I found myself quite bored with the attempt at making this film last longer than it needed to.  It didn’t help that the musical numbers, which there are quite a few of, were fairly uninteresting, let alone the fact that two of the lead actors are singers that didn’t sing.  I was also kind of missing out on learning more about the title character, who only appears so much in this film.  There was a certain amount of charm that I thought could be had with The Lorax, but unfortunately, it did not pan out as well as I was hoping; though it is a brightly animated experience. 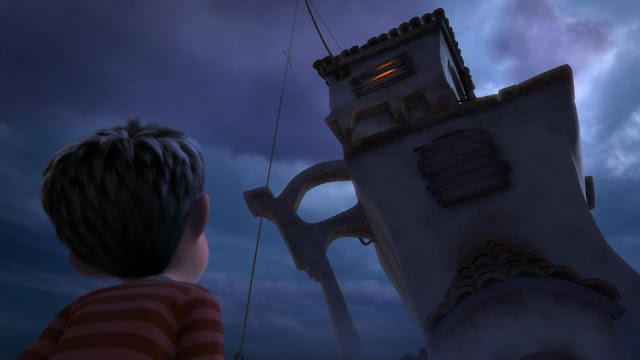 While it is called The Lorax, the film is really about Ted (Zac Efron), a 12-year old boy, living in the town of Thneed-Ville, a walled-in, artificial city where the main commodity is air, produced by the greedy mayor, Mr. O’Hare (Rob Riggle).  Ted has a crush on Audrey (Taylor Swift), who is an admirer of nature, despite the fact that there is none around to be found.  To prove his feelings to Audrey, Ted hopes to be able to fill Audrey’s dream of seeing a real, living tree.  On the advice of his grandmother (Betty White), Ted goes beyond the city walls in order to get in contact with an old hermit known as the Once-ler (Ed Helms), who knows what happened to all of the trees.
After encountering the Once-ler, Ted is told the story of what happened in the past that led to the eventual destruction of the trees.  This story focuses on the Once-ler when he was a much younger man, looking to become a success.  This involved taking the leaves, or tufts, from the Truffula trees in the area in order to make a wonderfully diverse item known as a ‘Thneed’.  Initially, the Once-ler chops down one of the Truffula trees, prompting the arrival of the creature known as The Lorax (Danny DeVito), the grumpy guardian of the land.  The Lorax warns the Once-ler of consequences that could arise if he continues down this path, which only leads to an inevitable conclusion that the Once-ler can only hope Ted can help him make up for. 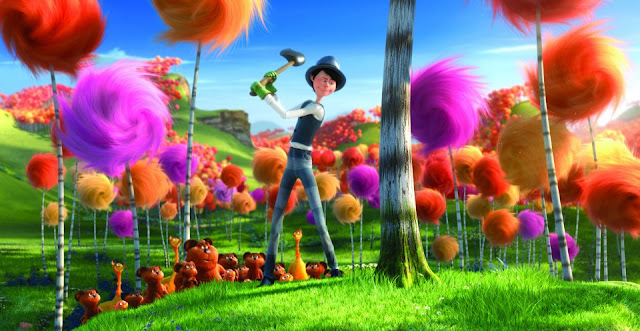 Once again, The Lorax finds itself in a similar position that has affected the other Dr. Seuss adaptations – it feels like it is being stretched past its limits.  The strange thing is that there could have been so much done to inform this universe.  The Lorax character, for instance, is quite interesting and quite tragic when you really think about the state of his character, yet we learn next to nothing about him.  Understanding how Mr. O’Hare came to power could have been another neat road to go down, but he remains one-dimensional.  The film certainly has all of the ingredients to make this story more engaging, yet it still only manages to have only the broadest aspects put together to slightly flesh out this very simple story.
One of the biggest factors in movies like these is whether or not it can be enjoyed by people of all ages.  That is certainly a notion that is most likely encouraged when studios have to develop these sorts of film, in order to have whole families be able to walk away pleased.  Now with that said, besides the notion of being able to hear people like Danny DeVito and current “it girl” Betty White in this movie, I do not really think The Lorax is that much fun for adults.  Especially in comparison to a majority of the recent animated fare that has come out, The Lorax really does not seem to strive for having that extra layer of cleverness that has made films like these plenty enjoyable for both kids and adults.  There is plenty here on screen for kids to look at and be enamored by (fuzzy bears, cute fish creatures, lots of bright colors, 3D!), but I wish there was something to make it more involving for everyone and the big environmentalist message that the film is playing on did not cut it. 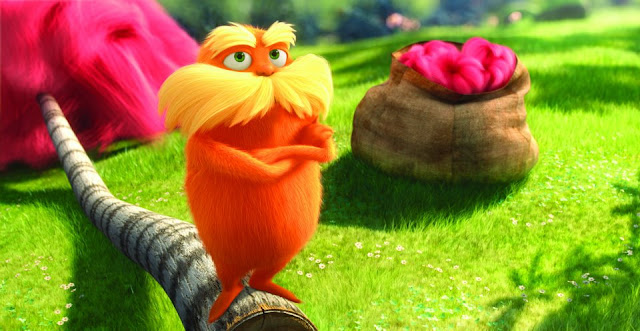 What was slightly surprising is that this film is a semi-musical.  What is more surprising is how Zac Efron and Taylor Swift are obviously capable singers, yet they do none of the singing in this film.  Regardless, for being a musical, the songs are not at all engaging, almost to the point of feeling obnoxious.  Honestly, they feel like yet another way to pad out the running time for this feature, which is unfortunate given that more could have been done to add some clever aspects to what was going on here.
The animation is fine.  It is full of bright colors and lively environments throughout.  The standard supply of cute background creatures is put into full effect as well, so if kids don’t find the mustachioed Lorax cuddly enough, there are plenty of bears and fish to fall back on.  The Lorax has been made by Illuminaton Entertainment, the same production company behind Despicable Me, which delivers a similar, very cartoony experience, which is fitting for this film.  In fact, despite still not warming up to these Dr. Seuss adaptations, I still enjoy the concept of making these into computer animated films, over live-action. 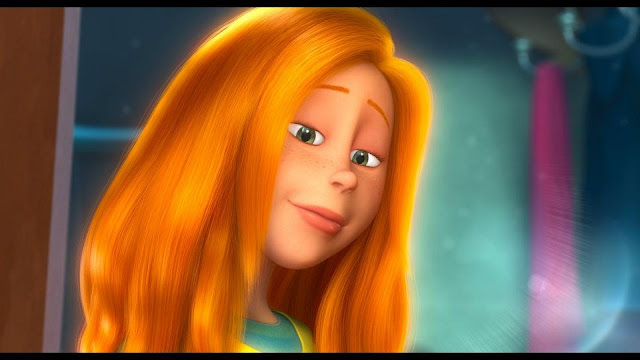 I would say mostly the same things about the voice actors as well; they’re fine.  Ed Helms is really the only cast member that truly goes through any sort of development here, as his character has a true arc and he gets to play with different versions of the same person.  DeVito seems to be having fun with his role as the Lorax, I just wish there was more of him.  Everyone else felt more or less like people brought in to fill in the obvious roles needed for the parts, regardless of how well suited a voice actor they may have been.
It is somewhat irritating to be so down on this film, especially since I did get some mild entertainment out of it.  Regardless of how stretched thin the story really was, a few jokes here and there did manage to make me smile and I did overall appreciate a number of aspects about the animation and style of the film.  And Ed Helms as the Once-ler was a pretty welcome presence.  It just feels like there is so much potential in these films that get squandered all too easily.  Here’s hoping that Fox In Socks is a decidedly much more fun comedic adventure.

Aunt Grizelda:  Who invited the giant, furry peanut?
The Lorax:  I’ll go right up your nose!
The Once-ler:  You wouldn’t hit a woman.
The Lorax:  That’s a woman? 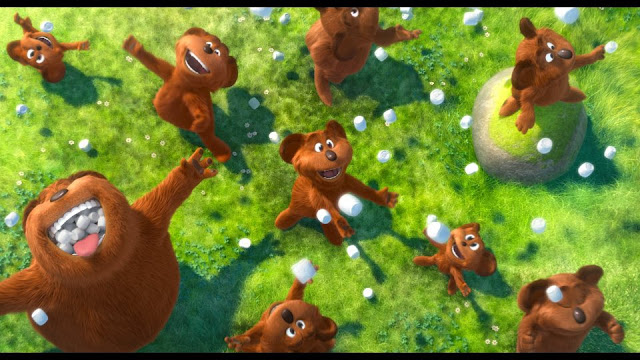