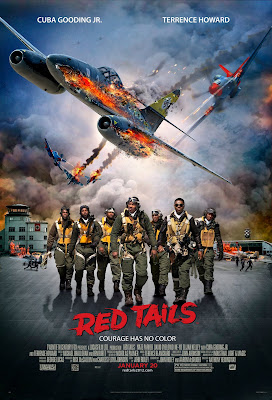 Red Tails is like a bad, unironic comic book movie come to life.  It could have been a number of different things, including a thrilling war-time action/adventure or a moving depiction of the turmoil faced by African American pilots during wartime, as they had to prove themselves in the face of segregation.  The film actually plays out as a really bland, by-the-numbers action/war film that is rife with clichés and one-note characters.  There is no real look deeper into its message beyond “racism is bad” and the elaborately designed aerial dogfights feel almost too overproduced to actually have any dramatic weight to them.  All of this and I haven’t even mentioned how dreadful the dialogue is.  One can surely find much more to glean from the HBO movie The Tuskegee Airmen (recently reviewed HERE), let alone a History Channel special, or just watch Star Wars if they have the desire to find something enjoyable, educational, or both; just as long as they avoid Red Tails.

The film follows the exploits of the Tuskegee Airmen, a group of African American servicemen during World War II.  Rather than depict any sort of training or build up to who these men were or where they came from (you know, character development), we arrive right in the midst of things, with a particular crew growing tired of going on boring flight missions in broke-down, second-hand planes, and seeing no action.  Two key characters to stay focused on – Martin “Easy” Julian (Nate Parker), the squad leader, and Joe “Lightning” Little (David Oyelowo), the hotshot fighter pilot.  As these two squabble over following their mission parameters vs. actually taking on the enemy, work is done back at base by Col. A.J. Bullard (Terrence Howard) to ensure a chance for the Tuskegee Airmen to finally be able to prove themselves and not be written off as a failed experiment.
A chance is finally given, with the Airmen proving themselves to be quite capable in the air, leading to more missions.  Easy continues to lead, despite making some questionable choices, while Lightning continues to go along for the fight, while also taking some action on by himself and getting the glory.  All of this occurs while a pipe-chomping Major Emanuel Stance (Cuba Gooding Jr.) cheers his men on from their base back in Italy.  As more war drama unfolds, both in the form of the Germans shooting down fighters and in terms of (very) mild racism, it will be up to the work of some underdogs to make some kind of a difference in the skies.

This film has been in development for quite some time.  It has been a passion project from executive producer George Lucas (who actually handled the directing duties on reshoots), as he has been wanting to make a film about the Tuskegee Airmen since the 80s.  Unfortunately, long production process and good intentions aside, the story told in this film is a mess.  The prospects of this film maybe achieving a possible victory or mild recommendation pretty much flew out the window in the opening minutes of this film, once a character started to speak.  It really is the dialogue that killed a lot of this movie for me.  But the film has plenty of other misgivings as well.
Strangely not working to the film’s benefit, Red Tails was scripted by John Ridley (Three Kings) and, curiously, Aaron McGruder.  McGruder is a cartoonist best known for creating The Boondocks, which is focused around African American culture and providing satirical insights and social commentary about racial and political issues.  This brings me back to why I think the film plays almost like a comic book.  Rather than seeming intelligent, the dialogue (among other script-based areas) is broad, very stilted, almost rooted in a pulpy 1930s serial, except it all falls completely flat.  If the film had a more stylized tone or look, this may have passed, yet there is no evidence of that.  Red Tails plays everything very straight and as a result everything feels routine to the point of irritation.

The fact that there is really no effort done to bring meaning to the importance of the Tuskegee Airmen beyond some opening and closing text bookends and a scene or two involving a crusty racist colonel played by Bryan Cranston (good thing he has Breaking Bad and Drive) really does not help matters either.  Oh wait, we do get the two-part subplot where one white man calls a black man the N-word in a bar, but later on, after proving their worth, everyone gets together in that bar and has a fun-loving discussion about racial epithets (progress!).  How about anything regarding who these men were before the war, how difficult it was for them to rise through the ranks and become pilots, or anything related to what it means for them to be a part of a significant cause for black culture.  I have heard that various iterations of this film have involved delving into this subject matter, but based on the results and other reactions regarding this film, it seems unlikely that any of this will come into fruition.
Oh yeah, the dogfights and aerial combat stuff.  It looks nice.  If there was anything I was sure of going in, it was that Lucasfilm would manage to pull off a number of good looking action sequences that take place in the air.  Hell, as long as I didn’t focus on the close-ups of the pilots wearing masks and spouting more horrendous dialogue, I was mostly OK with the action on screen.  I am not sure how involved director Anthony Hemingway was with these sequences in the film, but the way the virtual camera utilized to move in these action scenes was effective enough to keep everything clear and actually exciting.  My only real issue is how much these scenes felt like watching CG madness, with no real dramatic weight attached to what I was watching, given that the various characters I have been following do not have much to them, beyond the one defining characteristic to distinguish them.  I could have also done without the unintentional hilarity created by having the film manifest itself a German villain in the form of the one pilot who seems to hold a grudge and easily identifies his pilot target from afar.

So Red Tails has not landed safely into theaters.  I haven’t even touched on the actors, but suffice it to say that there was very little in the way of admirable authority coming from either Howard or Gooding Jr. (and his pipe).  I wanted to remain as open-minded as possible, which seemed like a difficult task, given the years of post-production and January release date, but alas, pretty dogfights was not enough for me to be able to stand by the film.  It is certainly not insulting in anyway, but it certainly becomes laughable in spots and irritatingly plain in others.  There is nothing very on point about its message that seems relevant and as an action film it is still subpar.  For me, Red Tails has been grounded from further takeoff.

Easy:  Fancy trick flying will only get you killed.
Lightning:  Or make me an ace… 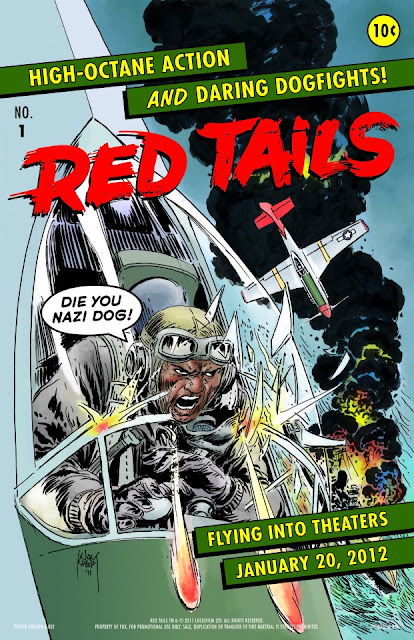