Watch ‘Young Adult’ Down A Bottle Of Dark Comedy 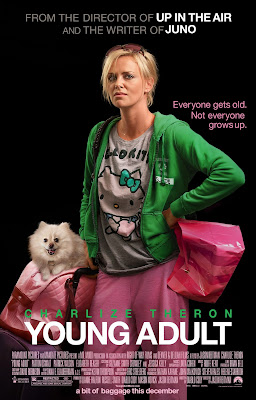 Mavis:  Here’s the deal; Buddy Slade and I are meant to be together and I’m here to get him back.
Matt:  I’m pretty sure he’s marries with a kid on the way.
Mavis:  No, kid’s here… I’m cool with it.  I mean look, I’ve got baggage too.

When I think of books meant for the young adult crowd (not counting the onset of vampire romance fiction), I tend to think of books that center around characters in their teens dealing with various types of drama, regardless of the genre, dealing with it, and experiencing a healthy level of growth because of it.  In the film Young Adult, we are given a protagonist who is the author behind a young adult book series, but does not practice the methods of a positive influence.  Charlize Theron (who is great in this role) manages to play an unlikable character who manages to become more unlikable as the film goes on.  That would generally be a bad thing, but this film actually uses that as its intention.  As a result, Young Adult manages to be a somewhat unique character study, fitted inside an incredibly dark and at times awkward comedy that does not hold back the way other films would. 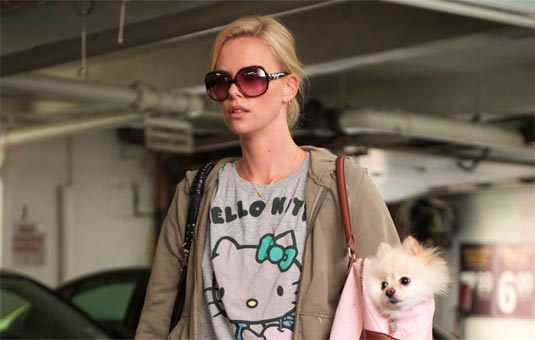 Theron plays Mavis Gary, a beautiful and somewhat successful author who is also lonely and somewhat of an alcoholic.  After getting a brief image of what Mavis’ life is like living in the big city, Minneapolis, we see her hatch a new plan of sorts, following the notification that her old high school boyfriend, Buddy Slade (Patrick Wilson), has just had his first child.  Mavis packs up her things, including her purse-sized dog, Dolce, and heads back to her hometown of Mercury, Minnesota.  Her plan is to reclaim Buddy, oblivious to the problems that this idea presents.
Upon arriving, Mavis avoids going to her own home with her parents and instead gets a hotel room.  She immediately tries to make a rendezvous with Buddy, only to schedule a date for the next day.  In the meantime, she goes to one of the old bars in town and strikes up a friendship with Matt Freehauf (Patton Oswalt), a former classmate who was crippled in high school and has since remained a resident of Mercury.  Matt is the only one who learns of Mavis’ plan, but once Mavis begins to reconnect with Buddy and interact with his wife, Beth (Elizabeth Reaser), things move down a dark and awkwardly comedic hill. 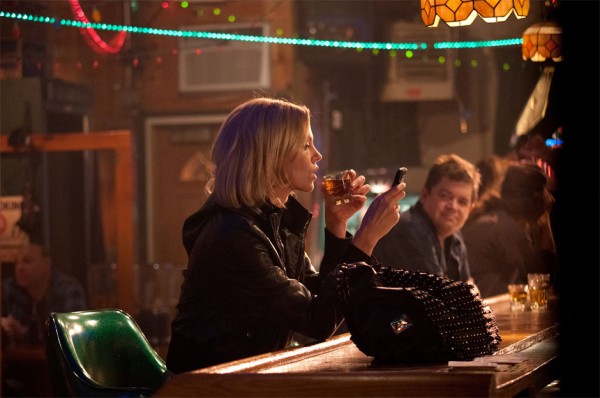 I have been a big fan of director Jason Reitman, who previously made Thank You For Smoking, Juno, and Up In The Air.  Each of those are films that I love to revisit, so in my mind, it seemed apparent that Young Adult was going to have to work hard to be able to match up.  While I would say that Young Adult is a good film overall and works well in not compromising its characters for the sake of a touching, Hollywood ending, I would also put it at the bottom of list, when ranking Reitman’s films.  That is almost a way of complimenting the film, as this reaction of mine is mainly due to its lack of a certain charm that the other films have had.  Young Adult does not feature a lead I would really want to continue to hang out with, regardless of how strong Theron’s performance is.  This movie is basically the opposite of Bad Teacher, not copping out on its lead character, going the route of a sitcom-style plot and instead embracing her level of narcissism and the overall cynical tone that is resolved in a fairly haphazard sense.
The film was scripted by Diablo Cody, who previously won an Oscar for Juno.  Hipster dialogue be damned, that’s a well written film, but the stylized nature of that screenplay is very much dialed down in favor of a much more retrained type of story.  The humor is very dark, very dry, and embraces the Ricky Gervais style of making things as cringe worthy as possible.  The central story is essentially smaller in scope, focusing on the train wreck occurring, as Mavis tries to shoehorn herself back into the life of her old boyfriend.  The best decision was to add the character of Matt, played by Oswalt, who serves as an appropriate outlet for Mavis, while also being able to voice discerning reasoning as to why her objectives are so abhorrent.  Given the tragic nature of Matt’s back story (and other tragic revelations), it is all these additional details that really add to the film overall. 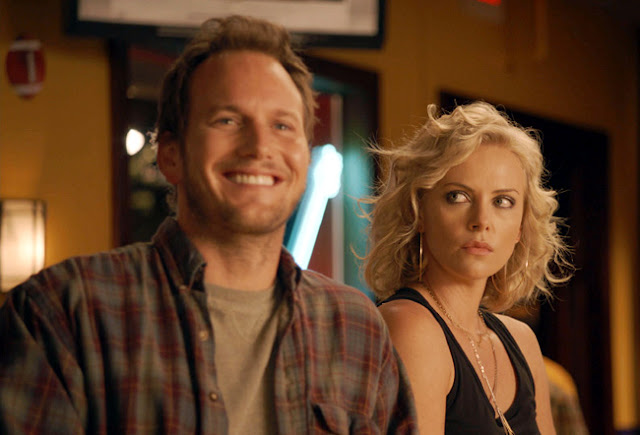 I have noted a few times that Theron is great in another role that requires her to really ugly herself up.  Not Monster-style ugly, but ugly in the sense that she is stripped of actor pride for the sake of portraying a mean, narcissistic, and very vulnerable persona.  The way Mavis must glamor herself up before going out, hiding the sad, lonely, distraught woman underneath says plenty.  More revealing scenes, in more ways than one, arrive later in the film as well, further indicating the strength of this performance.  It is a well crafted performance that is never overplayed and rightly establishes all the necessary qualities to make it work, regardless of how much respect we end up having for the character.
Additionally, there are a few notable supporting roles that work as well.  Oswalt, who I have seen do great work in a smaller film, Big Fan, gets another chance to shine here, establishing pathos for his character as well as easily highlighting his own idiosyncrasies.  Patrick Wilson deserves a good amount of credit for playing not really a dolt, but a man who acts oblivious to Mavis, in hopes of not having to relive whatever it was that pushed them apart in the past.  Keeping it together in the midst of heavy come-ons from an ex, while the wife and newborn factor in was a good enough challenge for Wilson to have.  I also enjoyed Reaser as Buddy’s wife quite a bit.  She does not have a prominent role, but there was a lot to take away from her expressions in the wake of Mavis’ presence. 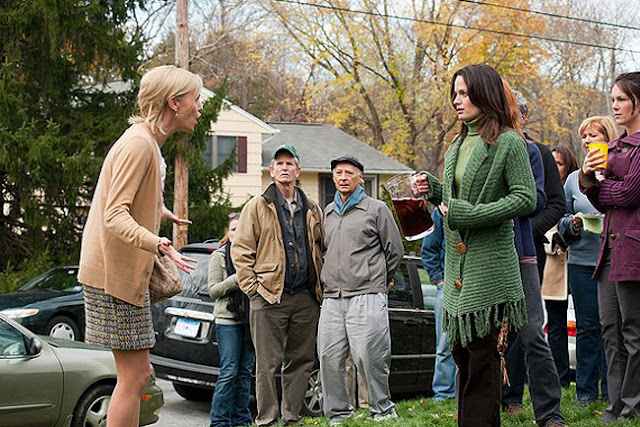 In the past I would say that Reitman, as a director, has done a good job at applying a clever visual style to his films, sometimes more overtly than others.  In this film, much like the script and performances, his visual touches seem dialed back for the film.  It is not necessarily a bad thing, but it seemed more apparent that this is a film made based on desire to re-collaborate with Cody again, as opposed to really adding a personal stamp to the film.  Still, there is a lot to admire in the way the film comes together.  It flows fairly well, up until the third act, which is a bit rushed, but definitely does not outstay its welcome.  There are also some good soundtrack choices, which has been another good staple of Reitman’s films.  The tracks heard in this film are quite fitting both in tone and in how they are rooted to the times from the past that Mavis is revisiting in her mind.
I wanted to like this film more, but in a way that is similar to The Descendents, I found the film to be good enough for a watch, but not one that I need to really revisit anytime soon.  The writing and acting in this film is very good.  I have especially high regards for Theron and Oswalt, who both manage to reveal enough about themselves and show how vulnerable they are when you get right down to it, but without having any of that drama register as unreal.  I was also pleased that Cody’s script did not feel like another version of Juno, but instead seemed like a good sign that there are many shades of what her writing has to offer.  It is a fine character study about a person I don’t really want to root for and would just rather see grow up.

Buddy:  Mavis, I’m a married man…
Mavis:  I know.  We can beat this thing together. 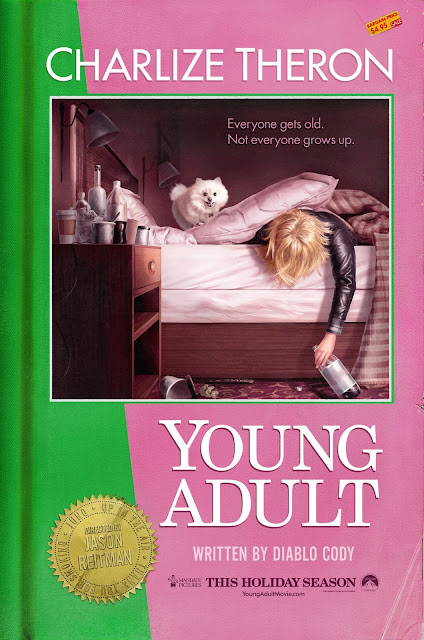