‘The Darkest Hour’ Didn’t Quite Brighten My Day 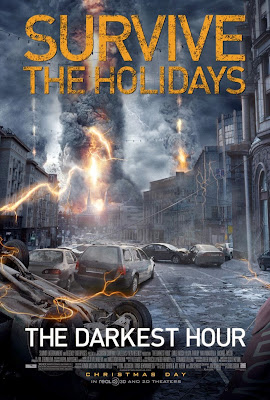 [Actual Dialogue]
Emile Hirsch’s Character: They must be able to sense us through our bio-magnetic shit!
Rachael Taylor’s Character:  That almost makes sense!

About 45 minutes into this Russian-set alien invasion movie I realized that I had no idea what the names of the characters I had been following were.  That probably sums up the character work done in this film to keep you hoping for their survival, even though the leads are fairly likable.  I should also note that at this point, I’ll only refer to the actors by their real names.  Nothing makes this badly timed release (Christmas Day, really?) an abysmal film, it just feels like an incompetent one, with a noticeably bad handle on its editing.  As a result, The Darkest Hour is not as laughably bad (making it almost good, but not really) like Skyline, but it’s also not full of serviceable grit and over-the-top (but still kinda enjoyable) gusto like Battle: LA.  It just sits in the “this will soon be available for $4 in a bargain bin” territory.  But hey, at least it was shot in 3D, right?

Emile Hirsch and Max Minghella star as a couple of twentysomethings traveling to Moscow on business.  They created some kind of social networking app and are looking to expand, only to find that their Swedish backer, played by Joel Kinnaman, has sold them out and taken everything.  Upset, but not disillusioned from spending a night out at the clubs, Max and Emile head to a nightclub and meet up with some American girls played by Olivia Thirlby and Rachael Taylor.  Shortly after they all hit it off, the power goes out…everywhere.  Everyone heads outside, only to notice lots and lots of bright gold lights descending from the sky.
As one of the curious looking light entities touches down close to our heroes and the surrounding group of people, we instantly find out that they are deadly.  War of the Worlds-style disintegration starts to occur, and everyone runs.  Max, Emile, Olivia, Rachael, and Joel all manage to find shelter in a storage room under a bar and hideout for a few days.  Deciding finally to make a move, the group heads onwards, through a deserted/destroyed Moscow.  They eventually learn that the invisible aliens make themselves known when around electricity-based objects and have a connection to microwaves.  The fight for survival ensues. 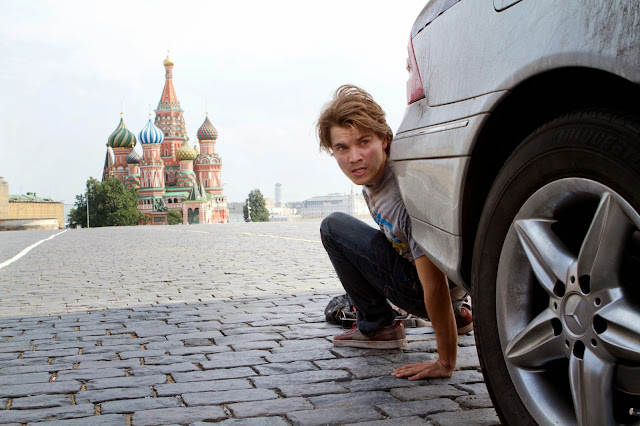 Movies like this tend to either devote far too much time to “developing” characters (Independence Day, which I love), before letting the chaos ensue or spending a very small amount of time establishing what it needs to, in order to get to the good stuff quicker.  It is the mark of a well written/constructed film (Attack the Block), when the second option works out.  I can give a good amount of credit to The Darkest Hour for spending only fifteen minutes or so, before having the aliens arrive.  It helps that the male actors (y’know – Emile and Max) are likable enough, so it is not too much of a chore to go through the perfunctory details of who everyone is, before settling into a sci-fi disaster tale.  Of course, this doesn’t stop the film from have plenty of other issues, such as idiotic decisions made by characters, a bad switch from a survival story into something that feels like Ghostbusters meets Mad Max, and then more idiotic decisions made by characters.
The aliens should of course be discussed in any movie like this, so here are my two cents on their creation – cheap.  The concept is “invisible aliens”, whose presence is only known by the triggering of street lamps, among other electrical objects, as they approach, and once they do, there is some gold, flickering light.  There is something to say for taking a different sort of approach (which would ideally lead to lower costs, but this movie still cost a pretty penny to make), but nothing interesting is really done with the ideas and it actually made me more curious to see the film dailies, where the actors (y’know Emile, Max, Olivia, and Rachael) would be screaming and running away from nothing, with great vigor.  The vague forms of exposition explaining why they are here are of course unnecessary, but hey, nice try. 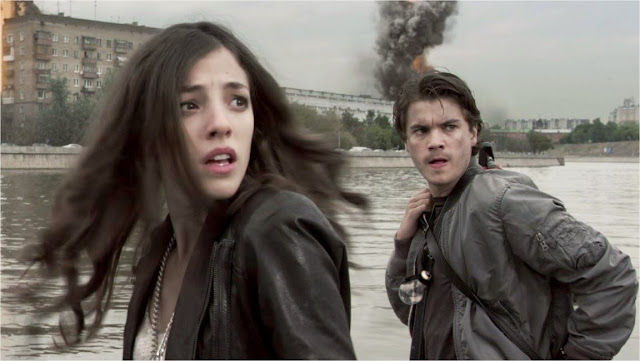 This film was shot in 3D by the way!  Yes, in addition to getting your attention by… existing, The Darkest Hour also costs more to see because of its need to really immerse the viewer by adding an extra dimension to the story; not with characters, but in viewing experience.  It is just too bad that this 3D film could have been post-converted and I probably would not have known the difference.
So obviously I loved this movie…No, no I didn’t, but kudos to those who found entertainment value in it.  I actually did to an extent, but not in a way that compliments the movie.  I guess it is neat that they set the film in Moscow (the film was produced by visually-stylish, Russian director Timur Bekmambetov), as it gave the film a more distinct quality, kind of, but overall, this film is just as forgettable as many of the uninteresting sci-fi horror movies that both hit theaters and go direct-to-video.  One last note:  “The Darkest Hour” is one of the more bland titles to have come out this year; better titles – “Lights Out, Bitch”, “Moscow Invasion!”, or “Dos Vedanya, Baby”.

Emile’s Character:  We’re gonna fight the hell back.
[I know I could have looked up their character names, but why?] 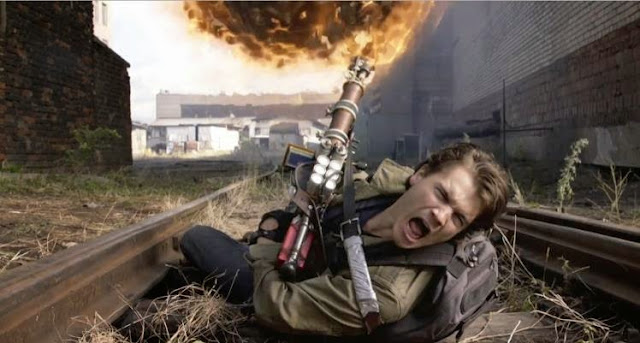