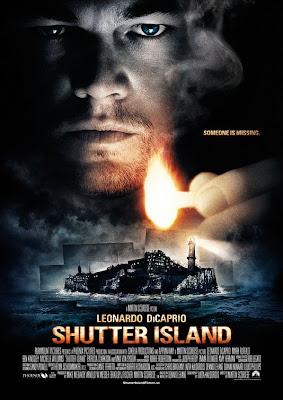 Shutter Island:  4 out of 5
Note:  In preparation for the latest Martin Scorsese film, Hugo, I decided to revisit his last film, Shutter Island, which is like the exact opposite of Hugo.  The following is the initial review I posted after the first viewing.  The only thing I can really add is that the film definitely benefits from repeated viewings.

Teddy Daniels: Pull it together Teddy.

A well made thriller from director Martin Scorsese. This is essentially a really slick B-movie, in the same realm as his last big Hollywood thriller, Cape Fear, the remake from back in 1991, which came after Goodfellas. Here, Scorsese clearly isn't working to make a monumental film to surpass the success he had with The Departed; he's instead made a film that sets out to unnerve its viewers as they try to unravel the mysteries surrounding the plot, and he does so by adding amazing art direction and a superb cast into the mix. 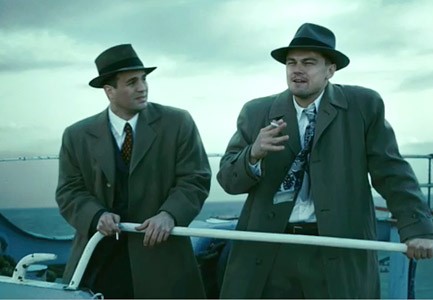 Scorsese's new millennium go to guy, Leonardo DiCaprio, stars as Teddy Daniels. He and his partner Chuck, played by Mark Ruffalo, are "duly appointed federal marshals" from Boston and they are headed to an insane asylum for criminals on an island, off the coast, to investigate the disappearance of a patient. Upon arrival, they are relieved of their weapons and given the stink eye by almost everyone as they attempt to probe deeper into the situation.


Dr. John Cawley: We don't know how she got out of her room. It's as if she evaporated, straight through the walls.

As the marshals investigate, surveying the grounds, interviewing staff and patients, a hurricane moves through the island, making a trip home very difficult, more so once the power goes out, releasing many of the prisoners in the process. Adding even more to this are the various reveals of not only the possible intentions of the workers on the island, but of the purposes for these particular marshals wanting to handle this case. 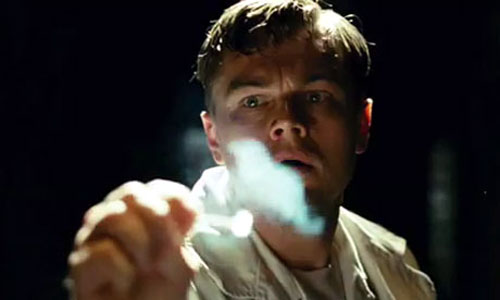 George Noyce: Don't you get it? You're a rat in a maze.

Some people knock Tarantino for all the various homages and references (which he gladly acknowledges) to other films that he makes his own. As both he and Scorsese, among the many, many other filmmakers are huge film fanatics, those knocks could easily be applied to this film as well. Here Scorsese goes all out in making this a genre picture that reeks of impressions made by other films. Throughout this flick I got a sense of The Shining, a lot of Hitchcock vibes, particularly Vertigo, many elements that I can attribute to a number of noir films, and of course The Twilight Zone. None of this hurts the film at all; the design is very specific throughout, and all of these mentioned elements only help push it into that pulpy territory.

This is a great looking film. Set in 1954, the film captures a wonderfully creepy atmosphere throughout, made even more stylish by the presence of wonderful art direction to reflect the nature of these older mental institutions. I can also always appreciate the costumes of these times, complete with large coats and great hats. The trailers may set this film up as a horror flick, but there is much more mood and tension present than actual scares. It is all handled quite well as we follow Teddy's journey through this very isolated asylum. The way this film is shot certainly follows the feel of a Scorsese picture, which is always met with solid editing, keeping the flow and pace alive throughout. And the way the flashbacks and dreams introduce backstory in a creepy manner are also solid.

Warden: If I were to sink my teeth into your eye, right now, could you stop me before I blinded you?
Teddy Daniels: Why don't you find out?
Warden: That's the spirit.

Then you have all these stellar performances. DiCaprio continues to shine, providing a character with great depth, slowly wasting into madness as he seems to be being manipulated during his stay on this island. Ruffalo is again solid as his partner. A strong female cast consisting of small but important performances by Michelle Williams, Emily Mortimer, and Patricia Clarkson. Then you have this sweet genre cast that includes; Gandhi, Father Merrin of The Exorcist, Buffalo Bill, the Zodiac killer, Casey Jones, and Rorschach. Kidding aside, each actor present in this film shines in their role, large or small.

There is much to admire here, but the main flaw should be mentioned. As I watched this film, I felt very involved in the look, sound, and overall feel of this film opposed to its plotting. I essentially felt like I was already watching it for the second time, absorbing more of what else was going on, because while the plot is strong, it certainly felt very familiar as more and more reveals occurred. Its interesting because an average film-goer can probably foresee where this film will end up early on, but the joy from the journey is what matters and is still very much present.

Another solid film to enter into Scorsese's cannon, that is matched with solid performances and great production values.

Teddy Daniels: I'm gonna find out what the fuck's going on in that lighthouse.