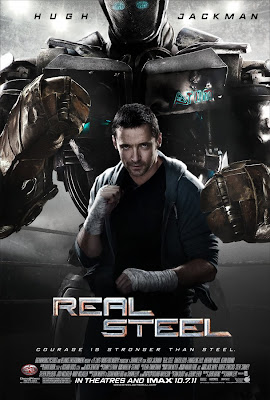 Charlie:  You know you’re bringing him home in pieces right?

As if one giant freaking robots movie was not enough for one year, we now have a new one that involves the seedy underbelly that is robot boxing.  Well not quite, Real Steel is a fairly standard sports action/drama, which happens to be set a small amount of time in the future where robots have replaced humans in the world of boxing.  However, despite the Rock ’Em Sock ‘Em concept of this film, the central plot of this story revolves around a father and his estranged son learning to come to terms with each other, bonding over the accomplishments of a robot boxer they turn from an underdog into the people’s champ.  Despite its adherence to clichés and many other issues that I had with the film, there was enough heart, likability, and sweet robot fighting action to have kept me involved with what was going on. 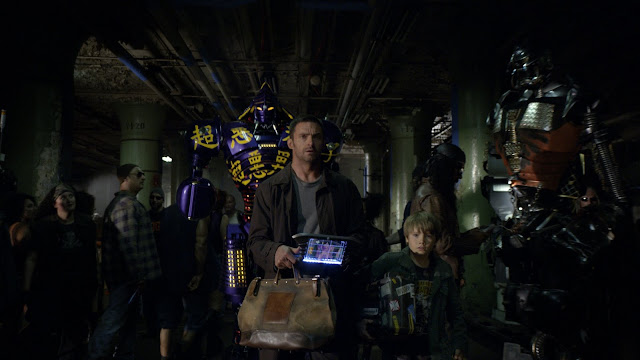 Hugh Jackman stars as Charlie Kenton, a former boxer who now struggles to make money, as he goes town to town with scrappy robot boxers, hoping to make some quick cash.  As we meet Charlie, he has literally entered a Midwest country fair and has his rusty robot take on a 2 ton steer.  Finding himself once again under the hold of many he owes money to, things take a turn for Charlie when he learns that an old ex of his has passed away and her and Charlie’s son Max (Dakota Goyo) is now being turned over to Charlie.  Charlie wants nothing to do with this and is happy to sign over custody to Max’s Aunt (Hope Davis); however he sees an opportunity to make more quick cash by using some fast talking with Max’s uncle-in-law to keep Max for the summer, while Aunt and Uncle are off in Italy.  Charlie now has money to buy a new robot and only has to look after his son for a short amount of time. Parenting!
Despite obtaining a new robot, Charlie blows it immediately, as he is too cocky and a bad gambler.  The new robot is lost, forcing Charlie and Max to head to a junkyard to find new parts.  This leads to the discovery of Atom, an older robot built for sparring.  Max quickly grows attached, especially since it has a “shadow function” giving it the ability to mimic the controller’s movements.  It is also suggested that Atom may be more than meets the eye.
Despite his aversion, Charlie agrees to let Max put Atom in some low level fights against other robots.  To his surprise, Charlie sees a great amount of potential in Atom, leading the robot to becoming an underdog champ in the smaller fight circuit.  This eventually leads the threesome to the big leagues and of course an inevitable showdown with the robot champion of the world or whatever, Zeus.  During all this time, Charlie and Max grow to bond with each other. 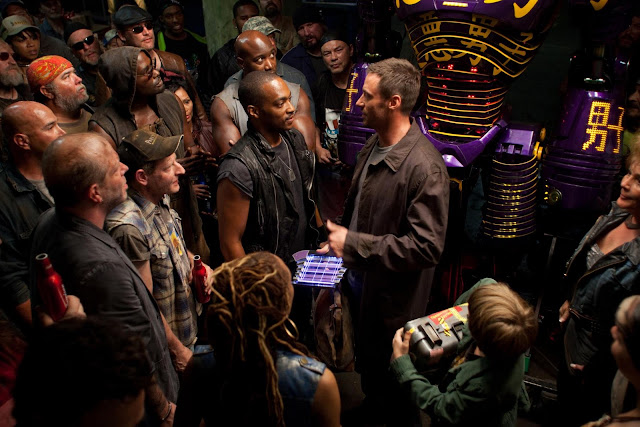 Despite how rigidly this film decides to follow a standard underdog formula, I did think the good outweighed the bad.  The first point I want to make is in regards to the robots.  They look really cool.  With the help of a combination of special effects, practical and digital, this film manages to bring forth some bitchin’ robot designs; much more so than the overly elaborate design’s of Michael Bay’s Transformers.  The look of these things really hearkens back to retro sci-fi comic-like designs in some ways, but still seems to bring in modern sensibilities and I appreciated that quite a bit.  It also helps that we get to see all of these robots in action, clearly, without eye-strain inducing quick cuts.  The fights are all well shot, well choreographed (with Sugar Ray Leonard apparently serving as an advisor), and never hard to follow.  Getting into exact physics is another matter, but this movie does supply cool robot fighting, which I can support. 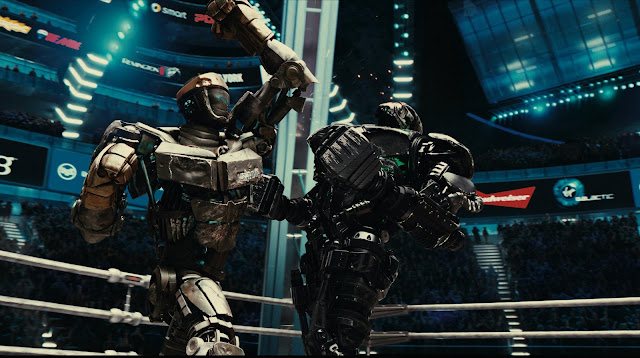 I also really enjoyed Hugh Jackman in his role.  Despite problems I have with the story and other things, which I’ll get to, Jackman commits to this character.  He never comes off as unlikable, but you certainly see him make some really poor decisions and work to redeem himself over the course of this film.  I am also pretty sure that Jackman has a natural talent for creating charisma with anyone who costars with him, because regardless of dialogue quality, he knows how to keep balance with others on screen.  The main example would of course be young Goyo as Max.  I thought he would be the biggest problem in this film, but Goyo projects a level of playfulness and irritation that seems perfectly appropriate for an 11-year old boy.  I just wish the film would have toned down his dancing.
The film also stars Evangeline Lilly, who is frankly gorgeous here, playing the spunky and too-dramatically written Bailey; the girl who grew up with Charlie in her dad’s gym and now looks out for Charlie’s robots, while also hinting at the fondness between them.  Anthony Mackie also shows up as an odds maker, aware of Charlie’s bad luck.  And Kevin Durand serves as a human villain of the film, the man Charlie is at odds with for not paying up after a match.  It is a talented group of people working to elevate the screenplay. 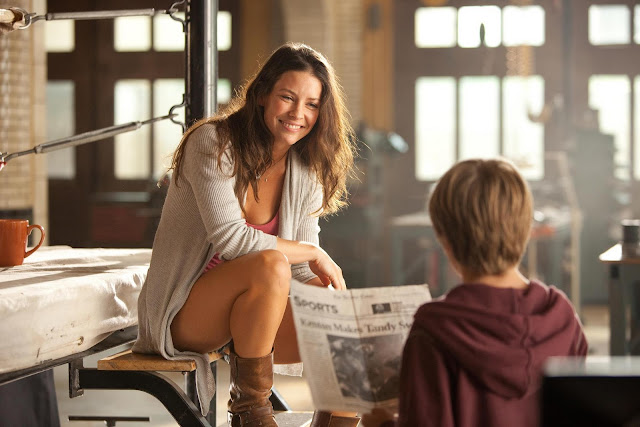 It is not that the story is necessarily bad, it is the fact that practically nothing is done to make it feel different from other films like it, aside from the fact that robots replace human boxers this time around.  The way that this film tries to be something more is by having the Spielbergian dynamic (and The Beard was a producer on this film) by showing us the bond between a boy and his pet robot and the other Spielberg trope that is the relationship of fathers and sons.  Unfortunately, I think the film rushes through some of these aspects.  Chemistry aside, it feels more like inevitable moments that are rushed when it comes to delivering on the emotion, as opposed to having us feel for a fleshed out relationship.  And I honestly would have liked to see Atom developed more, even though he’s a robot.  There’s a suggestion that he could be more, which the film doesn’t go into at all.  My other complaint is too spoilery for me to want to dwell on, but I really did not like aspects of how the third act played out.  There are elements that occurred during the final fight that made zero sense based on what had been previously established, which irked me a great deal. 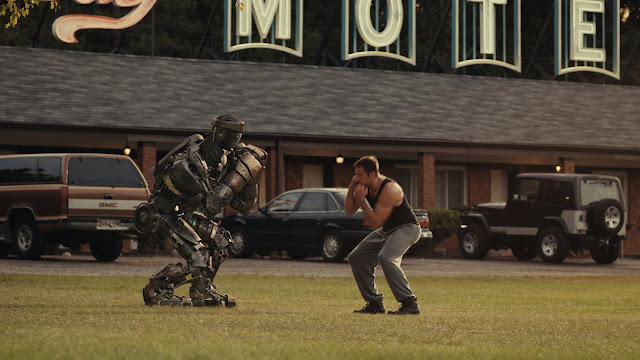 I’ll say this, director Shawn Levy, who previously gave us two Night at the Museum films and Date Night was somehow able to pull off a robot action movie with fights that were more coherent than what occurred in a Michael Bay robot action movie, which is something I did not see coming.  Despite its problems and un-ironic sense of creating a very straightforward underdog story, I think the film has enough likable aspects to just scrape by.  The robots look great, Jackman is incredibly affable in this film, and there is enough heart in the steel chests of these Rock ‘Em Sock Em’ robots to have kept me caring. 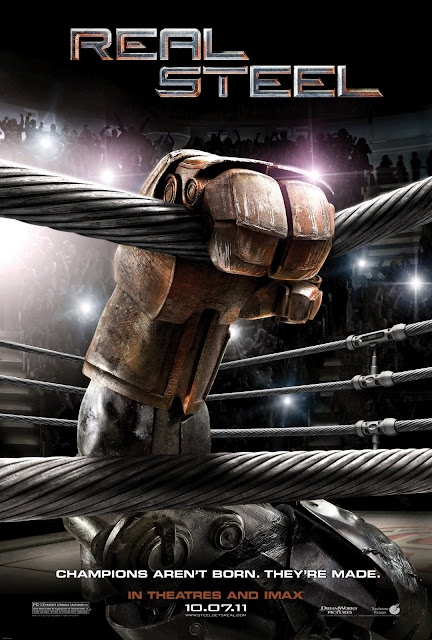