Go Gonzo With ‘The Rum Diary’ 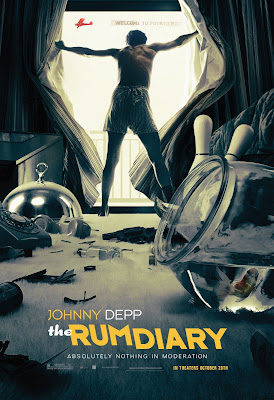 Lotterman:  How much would you say you like to drink?
Paul Kemp:  I’d say on the upper-end of social.

In the 1998 Terry Gilliam film Fear and Loathing in Las Vegas, which has Johnny Depp playing one of the various incarnations of writer Hunter S. Thompson, you could use many different adjectives and phrases to describe it, but a decidedly fun romp is not the one I would immediately jump to.  With The Rum Diary, a film based on a novel that Thompson wrote about his experiences in 60s Puerto Rico, but did not publish until the late 90s (which was due to his friendship with Depp), there is a decidedly lighter tone in a lot of ways, but it is the aimlessness and overall resolution of the film, which I think holds it back from achieving a greater sense of purpose.  This may be true to the spirit of Thompson, but I feel the film suffers due to it.  There are a lot of good things to recognize, including Depp’s performance along with others featured in the film and the photography of the various locations used, I just wasn’t fully taken by the film as a whole. 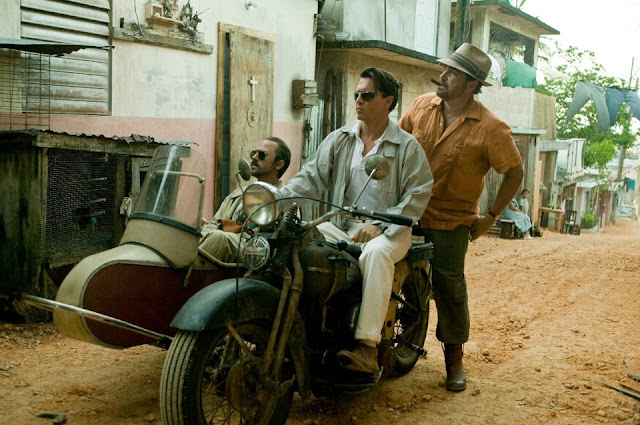 Depp stars as Paul Kemp, an American journalist who takes on a job as a freelance reporter for the The San Juan Star in 1960 Puerto Rico.  Kemp is an unsuccessful novelist himself and has more or less placed himself in his own sort of isolation from America due to his desire to stay away from what he would likely call the “bastards in office, running the country.”  Kemp is a bit of an oddball and easily taken by his hotel room minibar.  The film is not so much about having plot as it is seeing Kemp get into various scrapes with those also accompanying him on the island, whether or not he has gotten a taste of alcohol, drugs, or the addictive rum available.
Among the people Kemp forms some sort of relationship on the island with, there is Bob Salas (Michael Rispoli), the Star’s photographer who becomes Kemp’s closest friend and conscience kinda; Lotterman (Richard Jenkins), the editor of the Star, with a very non-fancy hairpiece; Moberg (Giovanni Ribisi) a drunken journalist who continues to work for the Star, despite being fired on occasion due to his contempt for Lotterman; Sanderson (Aaron Eckhart), a shady businessman with desires to bring Kemp into one of his latest schemes; and Chenault (Amber Heard), Sanderson’s fiancée, who Kemp quickly becomes obsessed with.  Various adventures between Kemp and these people ensue, as the desire to explore the culture leads to mixed results and bad hangovers. 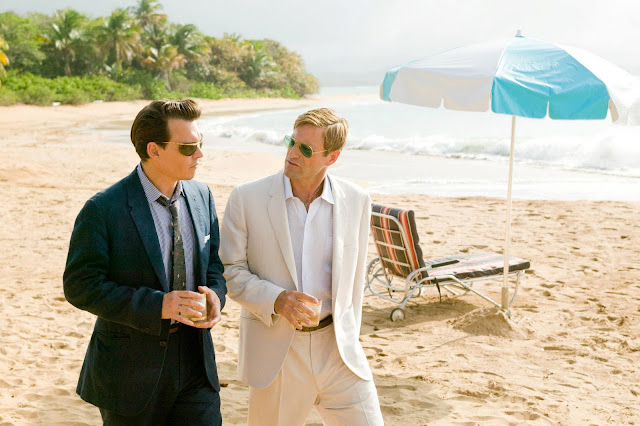 Following the last two live-action adventures I have had with Johnny Depp visiting beautiful locations, yet squandering away all of the potential for making good films while there (The Tourist; Pirates 4), I was excited to see Depp back in the world of Hunter S. Thompson.  Given Depp’s personal relationship with Thompson and the lack of a big studio financing this project, it seemed like a good way for Depp to be a part of something that he truly felt proud of.  Bringing in writer/director Bruce Robinson (Withnail & I) was an interesting and appropriate choice as well.  Alas, the problem is not really with how Depp performs or how Robinson has shot the film, it is more due to the nature of this story.
Before harping back on these problems, however, I want to sing some of this oddball film’s praise.  Johnny Depp is very good as Paul Kemp.  It is not much of a surprise, even as it is only a distant relation with the Raul Duke character from Fear & Loathing.  Depp’s work as Kemp may seem like one of his more normal characters compared to the costume shop he frequents when it is time to jump on the Burton Train again, but it is all in mannerisms and speech, which make him a fun straight-character and possibly unreliable narrator. 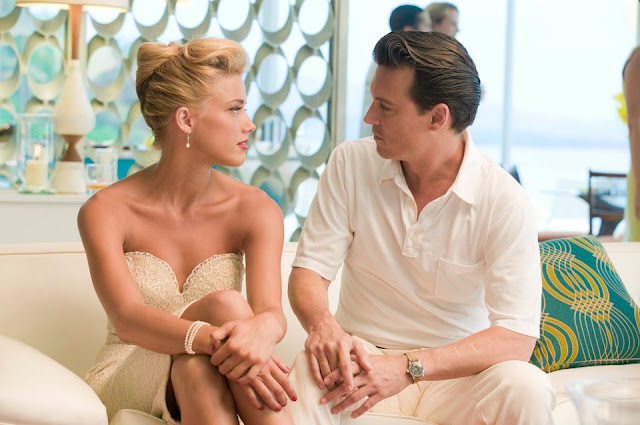 Along with Depp, I have listed all of the supporting players in this film, which is largely comprised of very solid character actors.  This works in the film’s benefit as well, as these other characters are all solid roles to have Kemp bounce off of.  Rispoli, for example, is the sidekick character for Kemp and the two of them have the right kind of chemistry that does not feel forced.  Eckhart is equally good at playing a hot-tempered sleaze, who still manages to exude charm when need be.  Even Amber Heard, the film’s sex pot, brings a playful energy to many of her scenes with Depp.
The production values of this film are also quite solid.  With much of the film having been actually filmed in Puerto Rico, I was very taken by the wonderful cinematography throughout.  It is less about being showy than simply having character be a part of this world, even calling attention to it at various times.  But even during times of night or during stormy weather, it seems like the film wanted to do a fine job of presenting the appropriate look and feel of Puerto Rico.  Even as the tone of the film becomes bleak, there is a good amount of craft and atmosphere to make the visual journey of the film very satisfying. 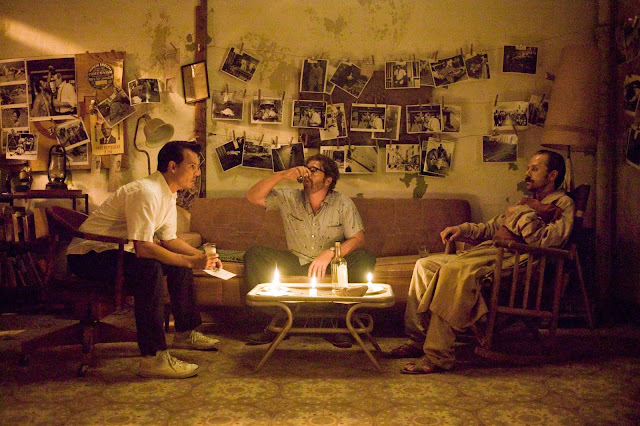 In regards to the tone of the film, it is the switch over to bleakness that hurts it.  It is not because the film loses a lot of its manic energy and is less fun in the end that made me like it less; it is because the shift makes everything become much much slower in the process.  It also soon becomes apparent that the film has nowhere to go, without tying up the various plot threads with a convenient bow.  And because that kind of resolution would not be true to the spirit of Thompson, which Depp and Robinson more than likely know, the film basically finds itself ending in a fairly realistic manner, letting a text wrap-up clarify some of the rest.  Make no mistake, this film is inherently a comedy, but Kemp does have to face a few dark places during his journey and unfortunately the film’s pacing suffers for it.
In terms of rating a film like this, I will say that I can recommend it overall.  It has a quirky effectiveness, solid performances from the wonderful supporting cast and a fine turn from Depp (who I would rather see nominated for his obligatory Best Comedy/Musical Golden Globe in this role, rather than Jack Sparrow again).  The film is also quite nice to look at, which is the same thing I have said about The Tourist, except that I don’t have the same contempt for The Rum Diary.  It is unfortunate that having the spirit of Hunter S. Thompson in mind both lead this film down interesting and successful paths as well as signaling flaws in its storytelling and pacing, but there is more to gain from this film, even if some of the humor is more dry than a majority of the liquor that the characters are drinking.

Sala:  I’ve got a brilliant idea. 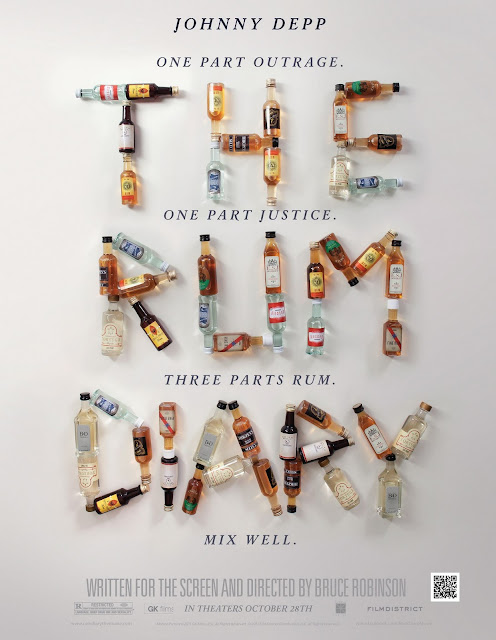