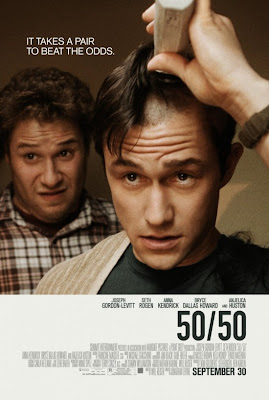 Cancer Comedy!  See, when you scream that at someone, besides the natural awkward chuckle some may have, selling this idea may not be the obvious path to success.  There is a tendency to make a film covering this sort of topic feel too sentimental or overly expressive in how it wants to make you feel.  Basically, there is a tricky balance to maintain, if one wants the audience to be able to laugh with the lead characters involved in a story about someone getting cancer and dealing with it.  50/50 does manage to maintain that balance.  It is a heartfelt comedy/drama that manages to wisely balance its jokes with sincerity and not come off as something too maudlin. 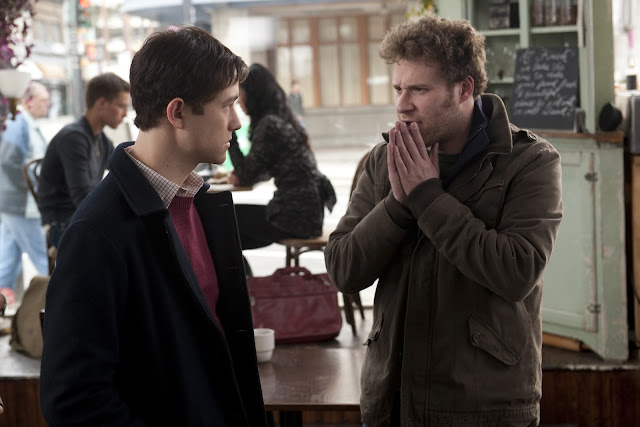 Joseph Gordon-Levitt stars as Adam, a young man working for NPR in Seattle.  Due to back pain, Adam goes to see a doctor who delivers unfortunate news in return.  It turns out that Adam has a rare form of cancer and needs to undergo chemotherapy treatment in order to hopefully reduce the size of the tumor.  With a little research, Adam finds that he has about a 50/50 chance of survival.  This news is of course alarming to those around him; including his girlfriend Rachel (Bryce Dallas Howard), his best friend Kyle (Seth Rogen), and his mother Diane (Anjelica Huston).
As Adam begins to go through with his medical treatment, he also starts to see a psychiatrist, who turns out to be a young psychiatrist in training.  This is Katherine (Anna Kendrick), who does what she can to help Adam with his problems, despite her lack of experience.  Also helping Adam deal with the reality of his situation are two other, older men, also going through chemotherapy treatment.  They are Alan (Phillip Baker Hall) and Mitch (Matt Frewer).  As the others in his life do what they can for him, which includes Kyle’s various attempts to get Adam and himself laid out of sympathy, Adam continues to cope with what could be his shortened lifespan. 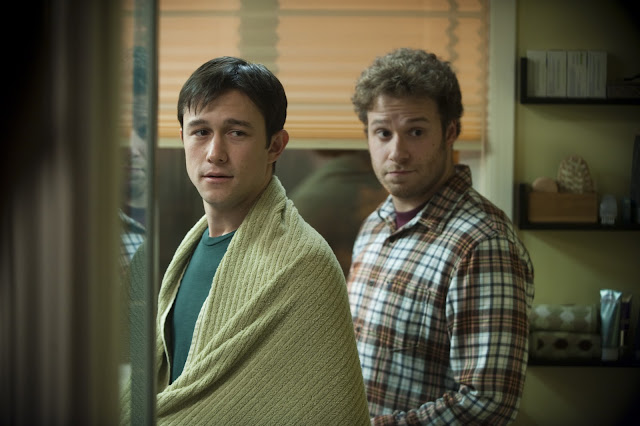 The film comes from true life inspiration, as screenwriter Will Reiser actually was diagnosed with cancer, while serving as a television writer for Da Ali G Show with Seth Rogen, who actually is his best friend.  Having gotten through it and now in his sixth year of remission, Reiser, Rogen as a producer, and director Jonathon Levine have now managed to make a film out of the experience, which takes a very grounded, swearing-filled approach to the subject.  Cancer definitely sucks and there is no getting around that, but while the film never goes too in depth on how awful things really can get when put under that amount of duress (which would easily eliminate any chance to make much comedy come from the situation), there is a lot of emphasis put on establishing these characters, which goes a long way.
The cast truly shines in this film, making it far more appealing than how the basic setup would suggest.  Joseph Gordon-Levitt, in particular, owns this film through and through.  As much as I appreciated the supporting performances, which I’ll get to, he is understandably the big star here and his work as Adam is superb.  Even as the film lays out the various “stages” that his character is going though, witnessing the various emotional states that Adam is in, seeing how affected he becomes by the various other characters and their actions in his life, as well as the effects of the treatment, and the emotional toll of this whole experience is quite a lot for one person to handle, but Gordon-Levitt excels in the role.  It doesn’t hurt that shaving his head for the sake of this film, on camera, wasn’t the worst thing for him either, as he pulls off the bald look fairly well. 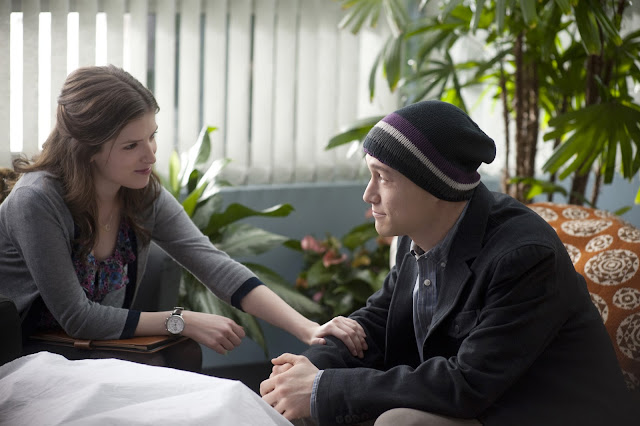 On the supporting side you have Seth Rogen as Adam’s best friend Kyle.  This is more or less everything one could hope for if you are a fan of Rogen’s, as the role is literally based on the actor as himself.  Rogen does everything that he is good at doing, but even behind the weed smoking and attention grabbing (especially when it concerns his female pursuits), there is a warmth that exists between he and Adam.  This warmth solidifies that relationship and is exemplified by the solid chemistry that exists between Rogen and Gordon-Levitt.  Also effective is the relationship between Kendrick and Gordon-Levitt, which is really the emotional center of the film.  The doctor-patient relationship rules are certainly bent by having such a young psychiatrist work with a young man going through such a huge ordeal, but Kendrick brings an awkward charm in her performance.  The work she does, which is exhibited through her fast-talking, high-strung, yet adorable persona does well to help maintain the film’s balance between its comedic and dramatic sides. 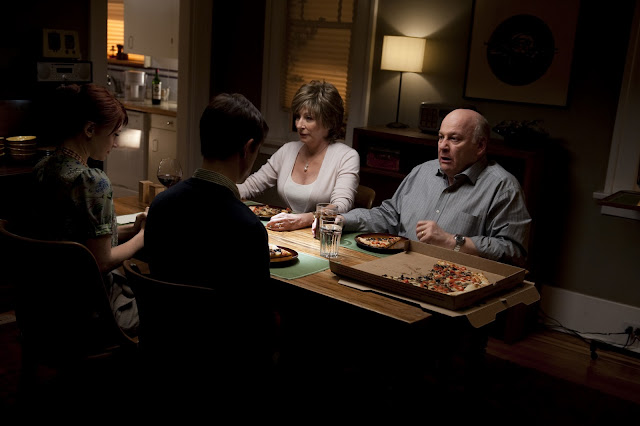 In addition to these two younger characters, the work by the older cast members is also quite good.  Phillip Baker Hall continues to be a great character actor, simply asserting himself as an older man who tells it like it is, with Gordon-Levitt using his low key approach to match.  And Anjelica Huston truly excels at taking what could be a very stock character and bring much more to it.  Huston does not have many scenes in this film, but the way she functions leads to a well thought out way to expand on her character.  The only unfortunate setback is how Bryce Dallas Howard’s character ends up feeling a bit underdeveloped, which seems more due to keeping the film focused and tightly edited in the long scheme of things.
One key factor that truly felt rewarding to me as a viewer is the way this film developed into its final act.  In a lesser film that handles similar subject matter, the comedy would have been very apparent throughout the first two acts, only to have the pacing grind to a halt and let the drama settle in strong, once the third act comes around.  With credit going to the cast and the solid story development, I believe that once the third act arrives, instead of diving head first into darker dramatic territory, enough proper balancing has been done to let each character arrive at an appropriate place within their arcs and the film as a whole still feels authentic enough, without betraying aspects that have come before it.  The comedy does not disappear either, as this film continues to bring great balance to the laughs and emotional resonance featured, but not at the expense of these characters. 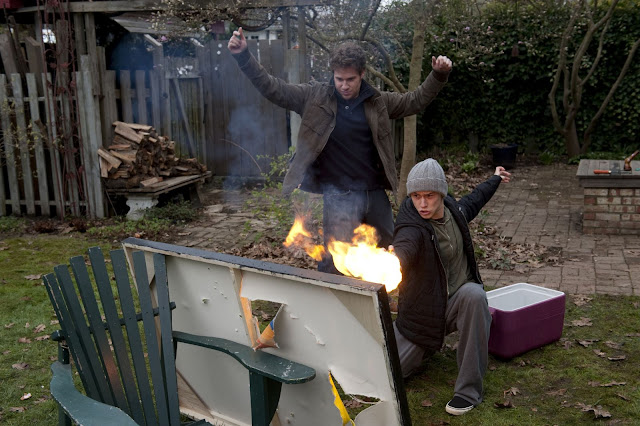 50/50 gets the most important things right.  It does not drown the story in melodrama nor does it offset the darker elements of the story by having too many big laughs early on.  It is a confidently made film, which puts its characters above almost everything else in an effort to comfortably rely on the chemistry and relationships seen to build a satisfying story.  The film does not necessarily avoid all of the pitfalls that are also seen in standard heart-warming tearjerkers, but it is still also smart enough to have a grounded sense of humor running throughout, which at least keeps one in a relaxed zone, while going along with these characters.  50/50 certainly beat the odds of being labeled as just another trivial cancer dramedy. 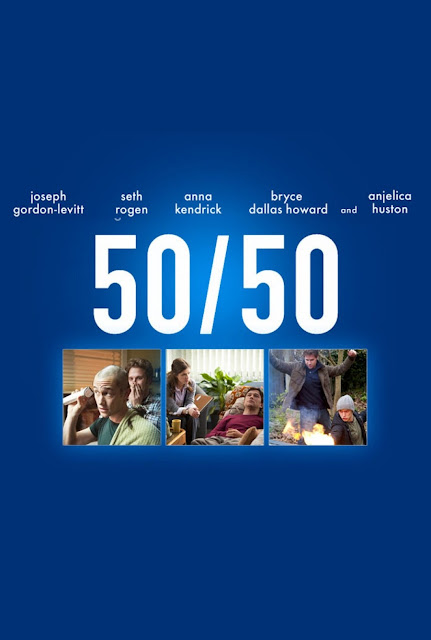