This ‘Moneyball’ Has Been Hit Over The Fence 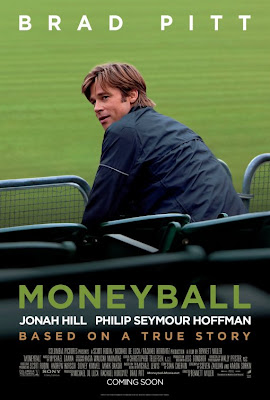 Billy Beane:  If we win with this team, we’ve changed the game for good.

In general, I am not big of watching professional sports.  However, if I had to name a favorite, it would be baseball.  Having said that, I only knew so much about the subject matter being addressed in Moneyball, a well written sports drama, based on true events, about a man attempting to shake up an old system with the intention to create a winning baseball team that is both ambitious and cost effective.  The film is effectively made and well acted, creating an atmosphere that seems to communicate the situation and the stakes quite well to audiences that could either be quite knowledgeable of Billy Bean’s history with the Oakland A’s or unaware of the various in and outs when it comes to managing a baseball team.  Regardless, it is an engaging film with a solid grasp on the material presented. 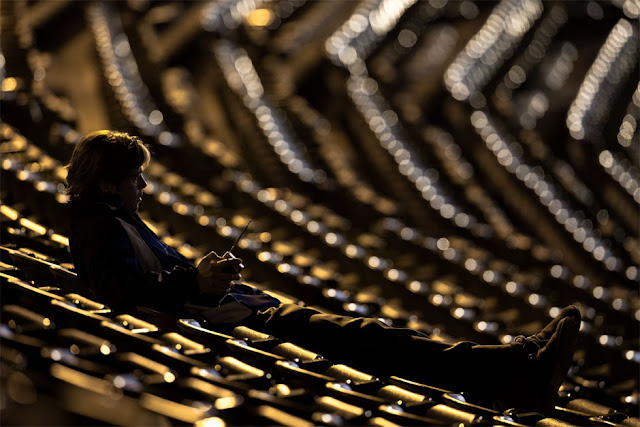 Brad Pitt stars as Billy Beane, the general manager of the Oakland Athletics.  The film begins during the final playoff match between the A’s and the New York Yankees in 2001.  We are immediately informed that the Yankees have about a $120 million budget to work with, while the A’s only have about $40 million.  Due to this, the Yankees (the team used as the lead example in all of this) basically have all they need to acquire all the supposed “best” players around in an effort to create the “best” baseball team.  Meanwhile, Billy must deal with his team’s low budget and the fact that his “best” players are being picked off, with juicier contracts being offered their way.  Coming off of that last game, which ends up being a loss, Beane and his staff have to start coming up with solutions to the loss of their best players.
During a trip out to Cleveland, with the intention of acquiring a new player, Beane manages to receive something much more intriguing in the form of an assistant general manager.  Beane is made aware of the talents of a young man, with an Ivy League background, named Peter Brand (Jonah Hill), who has developed a method, using computer analysis, to scout players.  In particular, this system is helpful in looking at the players deemed much lesser in value who may yet have potential to be of benefit to the A’s, both in their capabilities and in cost.  While the older scouts, the A’s manager Art Howe (Philip Seymour Hoffman), and pretty much everyone else think that Billy Beane and his rookie assistant are out of their minds, thinking they can improve upon an established structure, the pair have faith in the system and continue to support this possible game changer. 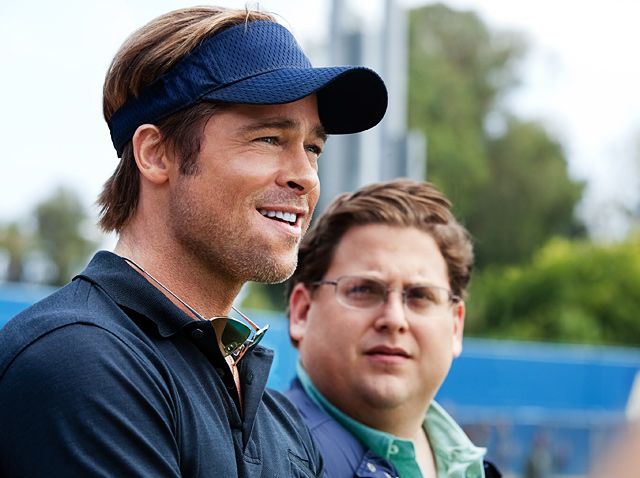 I have been following the production of this film for some time now and I am happy things worked out well.  I know it has been something of a pet project for Brad Pitt, who also serves as producer, and was originally going to be directed by Steven Soderbergh.  The film ended up being directed by Bennett Miller, who previously directed Capote, which also starred Hoffman.  Adding on to the talented cast and director is the presence of screenwriters Steve Zaillian (Schindler’s List) and Aaron Sorkin (The Social Network), making this film one of quite the high pedigree.  As a result, the combination of talents all proved to make for quite the compelling story, based mainly around the point of view of one man.
Brad Pitt is very good in this film.  Seemingly never one who gets enough credit for how talented of an actor he actually is, this film makes it more and more evident that he is in that Robert Redford level of cool, collected, and understated (plus the two certainly look quite similar).  Pitt has the task of playing a man who once had the chance to make something enormous out of himself, given the talent he possessed; yet didn’t reach that level and decided to approach it from another angle instead.  In the place we find him in during this film, Beane is a man who despises losing so much that he can barely even watch a game and drives around aimlessly, listening to radio talk about it afterward.  He is a divorced father as well, who loves his daughter, but it still seems clear that Beane is a very lonely man.  In all of this, Pitt never oversells these qualities; he instead brings a subtlety to his role, letting the dialogue and actions dictated by the script play out as it should.  These same thoughts pretty much establish my opinions regarding the rest of the cast as well, but this is very much Pitt’s film. 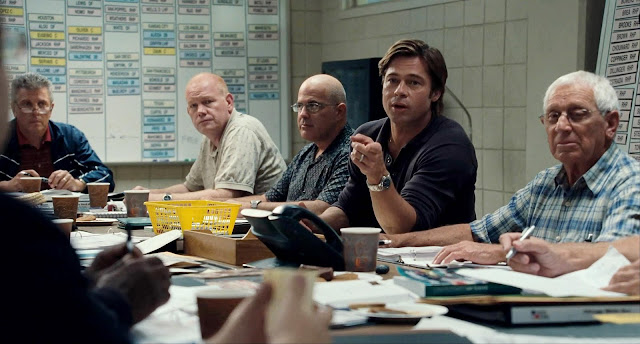 Moneyball is very much a drama, but the film is not without a sense of humor or a level of energy in various sequences.  The relationship established between Pitt and Hill is quite enjoyable, with the two of them finding an easy balance that keeps a lot of scenes that revolve around technical jargon more interesting.  The same can be said when it comes to having scenes that revolve around figuring out which players are best and, in particular, a scene that involves the negotiations and trading of various players.  It was also enjoyable to watch scenes involving the baseball players, particularly the new additions, who Beane has a lot riding on, despite the various problems that they seem to present.
One interesting point to make is how this film that revolves around baseball does not actually feature many scenes of baseball.  When it does, it is due to how the story has been crafted to appropriately incorporate these scenes and not for the sake of having “big game” moments to truly show how the underdogs have triumphed in their darkest hour.  Additionally, the cinematography involving these scenes, as well as the look of the film in general, which was handled by Wally Pfister, is quite good; lending a mood to the film that is matched by the contemplative tone seen throughout. 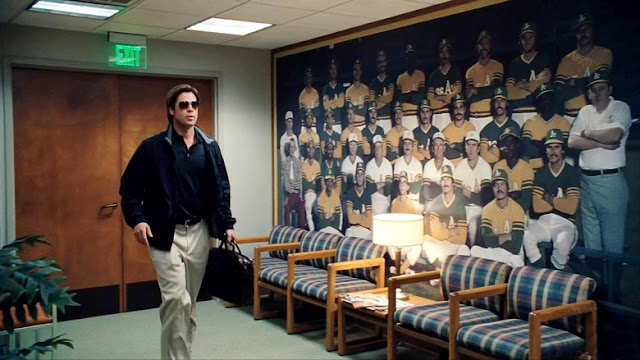 If there was one thing that kept me from appreciating Moneyball more, it would be the fact that there is not much to bring me back for a revisit of the film.  While a film like The Social Network had an amazing script and virtuoso direction to match, I feel like I have gotten everything out of Moneyball in this single viewing.  Despite this note, I still think the film is quite good.  It manages to be a fact based biopic that depicts an interesting storyline with the credibility of certain individuals based around how well the math adds up on a computer.  Not something one would think is very interesting, but the film manages to make it so.  Add to that a great lead performance from Brad Pitt, along with strong supporting work as well, and Moneyball is certainly no strike out.

Billy Beane:  Listen up.  You may not look like a winning team, but you are one.  So…play like one tonight. 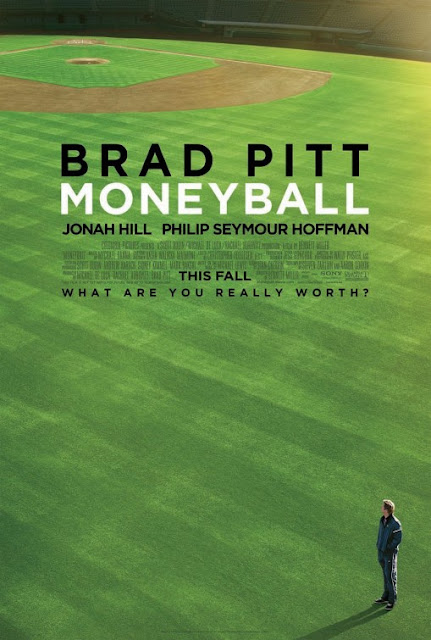