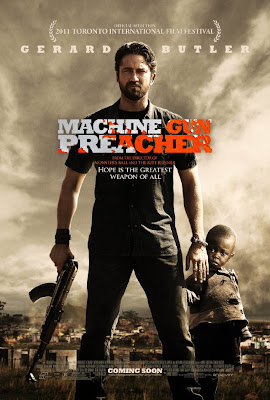 Sam:  Reckon they can do with all the help they can get.

When I first heard the title and saw a poster for Machine Gun Preacher, I certainly got the wrong impression.  In the wake of films like Machete and Hobo with a Shotgun, I was definitely caught off guard by the very “grindhouse” nature of the film’s title.  Machine Gun Preacher is actually a fairly intense biopic that deals with the plight of a man who reforms his ways, after having lived a life as a drug-dealing biker thug, and becomes a crusader of sorts for Sudanese orphans.  It is an interesting story that has a few problems with addressing the morality of the situation and being a bit too sentimental; however, star Gerard Butler certainly gives it his all in a commanding performance.

Butler stars as Sam Childers.  After a brief but intense prologue in Sudan, we meet Sam as he is getting out of prison.  He is greeted on the outside by his wife, Lynn (Michelle Monaghan), who informs Sam that she has since found God and wants to live a clean life.  Wanting nothing of this, Sam ditches his homecoming celebration (which would have involved his daughter, Paige, and his mother) and decides to go right back to doing things that probably got him put into prison to begin with, namely drinking and doing drugs with his pal Donnie (Michael Shannon).  After a particularly crazy and violent first week out of prison, Sam finally reaches a breaking point, which leads him down the righteous path as well.  Some time goes by and Sam finds himself with his own small construction business, the love of his family, and a newfound respect for life.  During one particular church service, Sam learns of a cause in Sudan and decides to check it out.
Sam tries to involve himself, working on building houses for the Sudanese.  After seeing first hand some of the troubles going on in Sudan, Sam has an epiphany of sorts, leading him to do two drastic things.  The first is building a church near his own house, with the idea of providing a place of worship for those who were like what Sam used to be, while he serves as its preacher.  The other is building an orphanage in Sudan for the many homeless orphans struggling to survive.  This second thing is a much bigger commitment, which leads Sam down a difficult path.  As Sam tries his hardest to keep his cause going, he must contend with his own family and life in America, as well as the difficulties and straight up danger that is presented to him, as he defends the lives of children, with no qualms about killing those who seek to harm them. 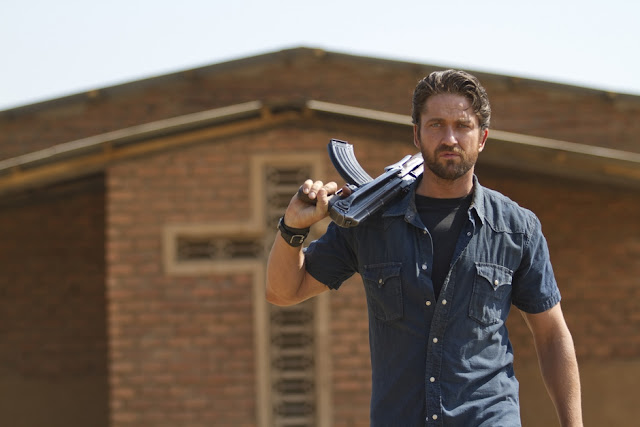 Gerard Butler is the best thing about this movie, which is a very good thing.  Having to go through a number of different emotional states throughout this film, Butler does a great job at properly acquitting himself through every one of them.  As he served as a co-producer on the film and has had a solid working relationship with the real Sam Childers, it seems apparent to me that he really has become attached to this story and the character, which I feel helped his performance in the film.  Regardless of a lack of characterization for some of the other characters in the film, which I’ll get to, Butler does do a very good job throughout, especially when it comes to selling the level of stress in his life when it comes to balancing various conflicts.
I did think that this film started off pretty rocky.  Mainly because it had to rush through a lot of different plot beats in order to set up Sam as a character.  We are certainly supposed to see Sam at what is the lowest point in his life, only to allow ourselves to build his positive image back up in our minds, but we see a lot of bad things, one after another, in quick succession, before he is suddenly supposed to be redeemed for his actions.  With that said, things do pick up, once the second act kicks into gear and we find Sam doing proper work and supporting those around him, which all leads to his travels to Africa. 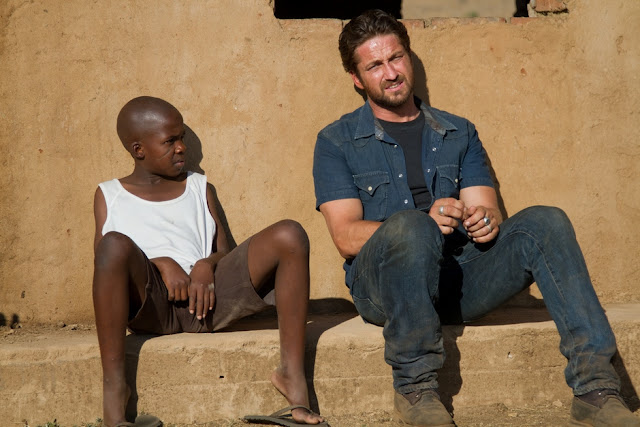 Director Marc Forster has bounced around between genres with films like Stranger than Fiction, The Kite Runner, and Quantum of Solace and he now finds himself once again approaching a new type of film.  With filming that actually took place in South Africa for the Sudan scenes, Forster certainly managed to bring a high level of energy and intensity to the various sequences involving action and dramatic stakes, when it comes to having Sam and his Sudanese friends face off against the various militia types attempting to commit evil acts against children, which includes kidnapping them and turning them into soldiers.  Forster also doesn’t shy away from showing some tough to watch sequences involving this sort of violence.
I found some of this troubling for a couple of reasons.  One is obviously due to the nature of the violence, which does not evoke many good feelings and is certainly a way to try and keep you on Sam’s side.  The other reason, however, is due to the film’s reliance on some of these more violent scenes.  The film provides more than enough sequences of violence that are supposed to feel like “emotional gut punches”, but don’t do anything more than simply repeat that same feeling again and again.  It doesn’t feel exploitative, but it does take away from the film’s chance to explore more interesting avenues, such as the morality of what Sam is doing.  Here is a man who is literally fighting fire with fire, acting as a kind of vigilante, yet the film does not really question if this is a good or bad thing.  It is especially ironic, given that Sam feels he is doing God’s work by helping these kids despite using violence as a tool to help him.

The other issue I had is the lack of characterization for other characters, particular in Africa.  For a film that spends a lot of time in Africa, there are frankly too many white characters populating this story.  Monaghan, as Lynn, is good enough as the wife trying to understand Sam’s attempt at balancing his lives and Michael Shannon is just a very good character actor in general, but what about Deng (Souleymane Sy Savane), Sam’s friend/guard in Sudan?  We learn next to nothing about the guy who Sam pretty much spends a majority amount of his time with.  There are plenty of other characters on the Sudan side of the story, who could have been explored more, but the film just does not attempt to go there.
I still did find the film to be quite affecting, due to how some sequences have been well crafted, how the story ends up playing out, and because of how strong the work from Gerard Butler is in this film, but I still feel more could have been done with it.  It does help to know about the various true elements of this story, as reading about Sam Childers is quite interesting.  As it stands, it is a flawed film that benefits from a lot of good elements scattered in throughout.  However, I can say that this is probably a better movie that the over-the-top grindhouse version of it, but I also did kind of see potential in a campy throwaway flick, involving kicking ass for the lord.  I guess you get what you get.

Deng:  The entire rebel army has put a bounty on your head.
Sam:  Must be doing something right. 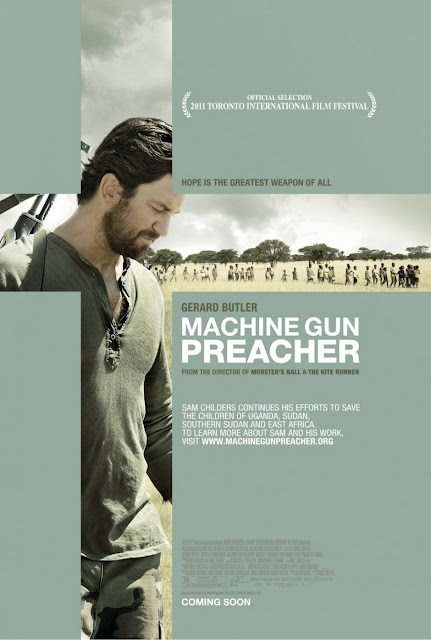