Buckle Up And ‘Drive’ 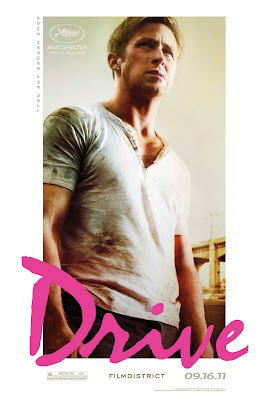 Driver: If I drive for you, you give me a time and a place. I give you a five-minute window, anything happens in that five minutes and I'm yours no matter what. I don't sit in while you're running it down; I don't carry a gun... I drive.

Seeing the pieces fall together in a film all so perfectly is a beautiful thing.  The right combinations can sometimes still make for chaos, but at other times work in perfect rhythms.  Drive presents this very positive latter angle.  Taking a standard crime-story and turning into a piece of neo-noir art makes for a great cinematic experience.  This film accomplishes that.  Drive is stylish, pulpy fun.  The type of inventive film that makes an old plot feel very fresh; and its lead by Nicolas Winding Refn’s fantastic direction and Ryan Gosling’s quiet cool as the lead. 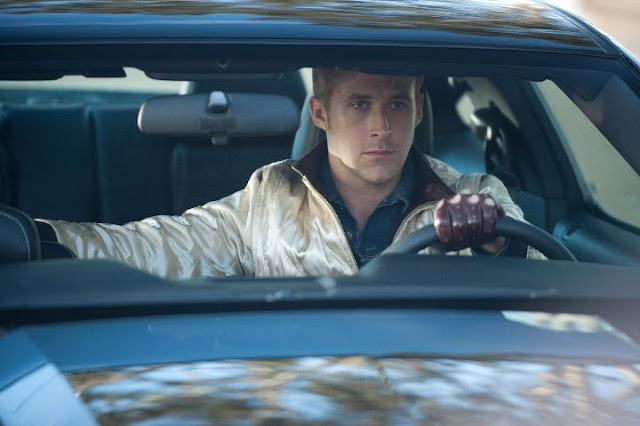 Gosling stars as a true man with no name.  He is a driver, who works by day as a Hollywood stuntman and at night as a professional wheelman.  In his off time from those two thrilling lifestyle choices, “Driver” works in a garage, for Shannon (Bryan Cranston), the man who also manages Driver’s extracurricular activities.  Driver lives in LA and soon develops a bond with his neighbor, Irene (Carey Mulligan), and her young son.  While Driver seems to be developing strong feelings for Irene, she makes it known that her husband, Standard (Oscar Isaac) will be getting out of prison within a week.  Meanwhile, Shannon sets up a deal with some shady figures, Bernie (Albert Brooks) and Nino (Ron Perlman), to have Driver race in the professional circuit, in a stock car funded by them.  There will of course be complications, mainly stemming from the arrival of Standard, who manages to involve Driver in a situation that will not be so easy to getaway away from, regardless of how great his driving skills are.
I have seen this story before.  It has been done very well at times in both fun, explosive action movies and in hard-boiled crime thrillers from the 70s (which are the types of films that Drive has definitely been influenced by).  One of the reasons why Drive is so effective is because of how it manages to lay out all of the familiar cards on the table, in regards to the story being told, shuffles them up, and then deals them out in a way that shows you a winning hand that you may not have seen before.  Strange card metaphors aside, the film has a unique approach to its storytelling, which is quite refreshing and due in large part to how well-directed the whole film is.  It is not as if there are any major tricks in the presentation (the film follows a very linear path), it is just put together with high end parts as opposed to scrap. 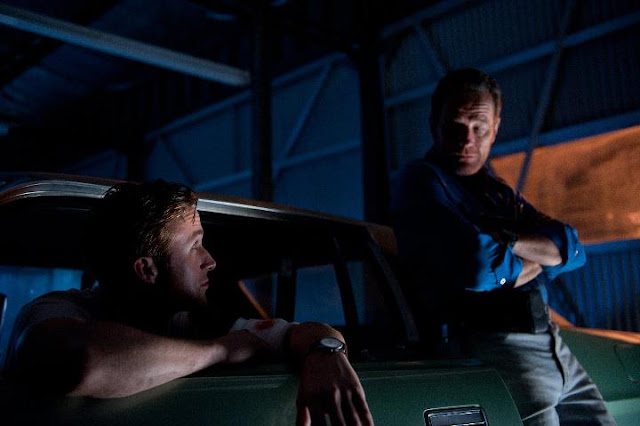 Shannon:  You put that guy behind a wheel and there’s nothing he can’t do.

Danish director Nicolas Winding Refn was personally chosen by Gosling, because he really enjoyed the films he had worked on in the past, such as Bronson and the Pusher trilogy.  What a great choice this turned out to be, as Refn really worked hard to make this an incredible piece of work that plays to convention only in its structure, but has so much more going on due to his focus on the faces of these characters we are supposed to try and figure out and showing off the “action” that truly matters.  Along with the fantastic crew he had working with him, including cinematographer Newton Thomas Siegel, editor Matthew Newman, and composer Cliff Martinez, Refn has put together an incredibly stylish piece of work, evoking elements of noir, European and art house cinema, and straight-up B-movie thrills.  The fact that the choice was made to apply electronic and synth-heavy, retro song choices only served to make this film more accomplished in its creation.  I am not surprised that Refn won for best director at the Cannes Film Festival.
This film has a fantastic cast as well, starting with Gosling.  His role as “Driver” is one that is more complex that most characters seen this year and he is heavily limited in both dialogue and personality.  The majority of the film is shot completely around him, namely his face, which becomes a huge outlet for what is going on, with only the slightest of changes.  For example, the opening of the film involves Driver manning the wheel for a getaway, but instead of focusing on speeding cars going around curves, much of the chase and tension is handled via shots on the face of the character.  There is a level of stoicism to all of what Driver does in this film, as he seems to present himself as in control at all times, yet in watching him, I always want to know what he is thinking.  Gosling’s quiet but effective presence in this film is great to behold, evoking a level of existentialism (a very easy keyword to use for this film as a whole) as well as the cool of Steve McQueen. 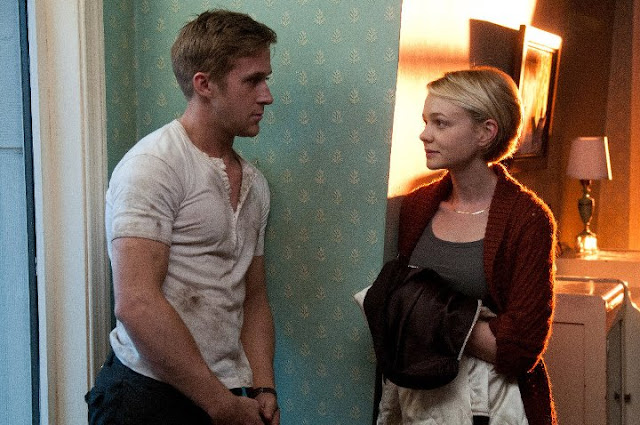 The supporting cast is wonderful as well, with each character properly representing the exact roles you would see in this type of film, yet excelling any way.  Cranston is the lovable loser of sorts, who serves as a mentor figure, but has never had much of the luck he’s needed in life.  Mulligan is a white light in the life of Driver, playing her character as vulnerable, but not needy or too sentimental.  Oscar Isaac has a role that could have gone a much more clichéd route, given that he is the troubled husband, yet there is a level of restraint and understanding that is commendable.  Mad Men’s Christina Hendricks also shows up for a small part, which is worth noting since it is just nice to see Hendricks in general.  Similarly, Ron Perlman only has so many scenes in this film, but the guy is still incredibly watchable.

Driver:  My hands are a little dirty.
Bernie:  So are mine. 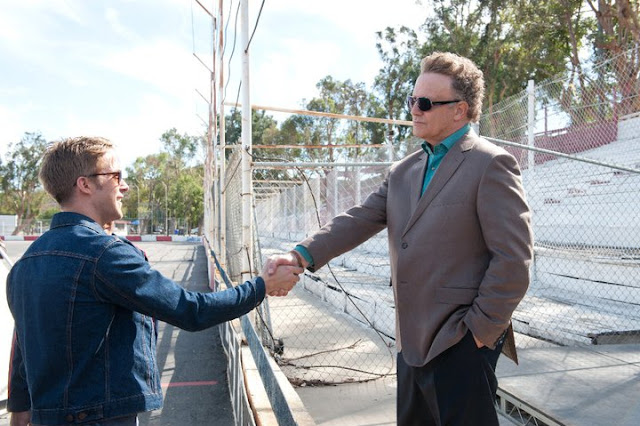 More special mention goes out to Albert Brooks as the real heavy in this film.  I would completely love to see him get plenty of awards recognition when the time comes, as he is such a threatening presence, delivering every sharp barb to precision and working well with his darkly sly touch on the menace he presents.  It is not that he is playing against type, this is just the furthest dark corner that one could see the Albert Brooks character in and I loved it.
Another way to narrow down a description for this film would be by calling Drive an art house take on a heist thriller.  With that said, there is a level of brutality that the film is not afraid to explore.  The film effectively delivers on its action side as well, regardless of how traditional the plotting is.  Several key sequences all serve as standouts simply because of how great the setups are and how stylishly executed the scenes are. Without knowing much about Driver, seeing him act, whether it is in his precision driving or in his violent confrontations, there is still a level of intrigue that it creates, which keeps us attached to this character on a personal level just as much as on an action-plot satisfaction level.  Involving the audience in various thrilling acts from a character’s perspective is an effective way to craft cinema, which is again credit to the stylish direction and the work done by Gosling. 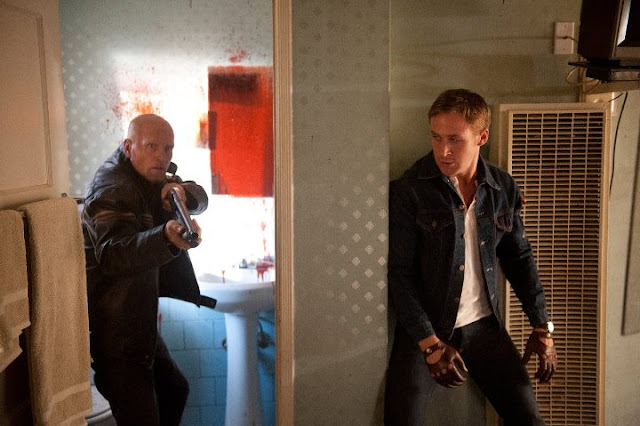 Drive was a wonderfully satisfying film to behold.  Everything about the presentation was effective.  The film is deliberately paced, providing an examination of sorts regarding our lonely hero, as he contends with the life he has chosen and the people he associates with.  Gosling and a great supporting cast all do top notch work here.  The whole tone of the film brings a great sense of style that somehow invokes pop and bleakness.  It is beautifully shot, with lots of wide angles, and an almost fairy tale-like handle in its delivery.  Drive brings so many different elements to a simple story, making it a brilliant exercise in style, which is deserved in its acclaim.  All of this said and I can still also simply say that is a bad ass crime story, with some 70s touches, and a slick, experimental identity of its own.  Ride along with this one.

Bernie:  Now it’s your turn to clean up after the mess that I’ve made. 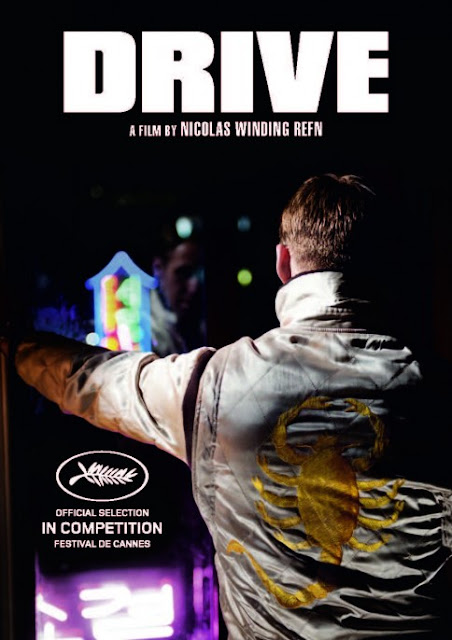