Reynolds And Bateman ‘Change-Up’ During One Big Freaky Friday 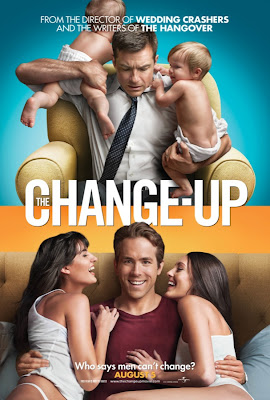 Mitch:  Dave and I both had big plans in mind when we were young.  Dave wanted to be an astronaut and I wanted to sell dolphins on the black market.

Studio Head:  Man, remember back in the 80s when all of those body-switching comedy movies were really popular?  We made tons of money then.  Do we have any ideas like that out there now?  Studio Plot Pitcher:  Well sir, there are some big, big comedies recently, which have all benefited from having an R-rating, as if we were back in another time or something.  What if we took the best of both worlds and made a crude, R-rated, body-switching comedy?  Studio Head:  …You know what I think?  I think you’re going to get a promotion!  Studio Plot Pitcher:  That’s nice to hear sir.  I had two actors in mind, who are both likable and funny.  Jason Bateman and Ryan Reynolds both have a knack for specific characters and are opposites of each other.  They could play two guys that “change-up” their personalities for an amount of time, before learning a lesson.  Studio Head:  Did you say “Change-Up”?  If you did, I think we just found our title!  Reynolds and Bateman huh?  Sounds good, even if the film does not take much intelligence to come up with, at least we have two solid leads that can deliver plenty of material for us to edit around.  Studio Plot Pitcher:  Agreed sir, I’ll make the calls, you write the checks. 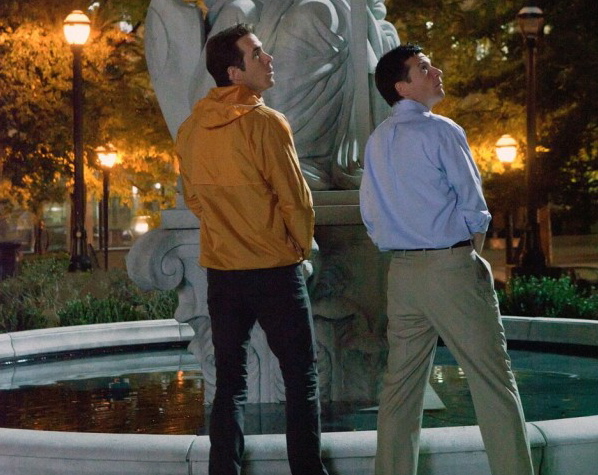 Admittedly, I have nothing wrong with the idea behind this film.  I enjoy a good body-switching comedy, as long as I am entertained, which goes the same for any film, really.  I do find it funny that this is actually the plot device for the film:  two guys peeing into a magical fountain and wishing (at the precise same time, mind you) that they had each other’s lives, only to wake up and find that this has been made so.  I also enjoy a good R-rated comedy, which we have seen plenty of, so far this year.  The idea of combining what is usually a family friendly plot with the vulgarity and bawdiness of an R-rated gross-out fest is almost ingenious.  It also borders on being almost offensive, almost too crude, and almost too dumb.  Fortunately, it is almost consistently funny, as the film delivers a high volume of laughs throughout, even if it doesn’t have a care in the world for any kind of real life logistics.  This film doesn’t care about earned emotional stakes, it is bent on being very, very funny and for the most part it is.
As I have described, Jason Bateman plays a Jason Bateman-type character: Dave – busy lawyer, married, and father of three.  Ryan Reynolds plays a Ryan Reynolds-type character: Mitch: Slacker with aspirations of acting and having lots of sex with any hot girl to come his way.  After drinking a ton and peeing in the above-described magical fountain, the two men wake up to find themselves inhabiting the bodies of each other, and the hilarity ensues.  Mitch/Dave must find a way to handle a big potential job promotion, his children, and the care of his wife (Leslie Mann), while Dave/Mitch must find a way to handle the surprise acting gigs and various hot women that come around looking for a good time.  Also, Olivia Wilde is an attractive legal aid in this movie… 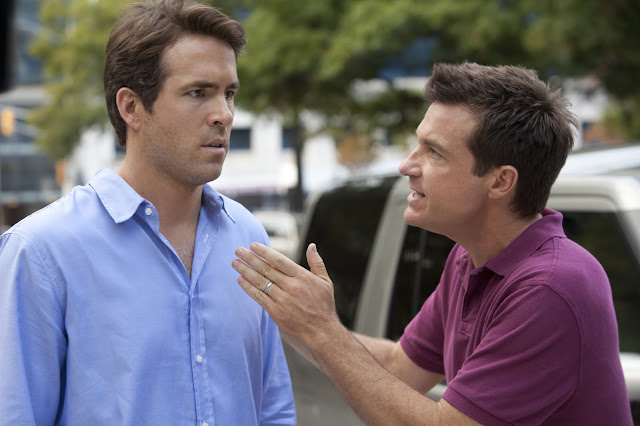 The film was directed by David Dobkin, best known for directing Wedding Crashers, and it was written by Jon Lucas and Scott Moore, best known for writing The Hangover.  With their powers combined, this film is the Captain Planet of ridiculous gross-out comedies for this year.  It goes incredibly far with the R-rating, supplying all of the crudeness one would hope to find in a goofy comedy involving that group of filmmakers.  However, much like Captain Planet, the film is fairly disposable in the long run.  While the jokes have a strong effect in the moment, with many that can probably carry-over for a while, there are not any real characters in this movie I would care to root for or even remember after it has ended.  In a movie like The Hangover, I can still come back to these characters in my mind, as I enjoyed the relationships built up there and found their experiences to be memorable.  In The Change-Up, I could laugh and appreciate a lot of the shock humor, but the few dramatic beats that this film relies on to have us on board with these characters ultimately doesn’t matter.
Regardless, there was still a lot of fun to be had in this film.  When the jokes hit, they really hit.  I also really enjoyed what Reynolds and Bateman brought to the roles that required them to play against type.  I am a big fan of Bateman and seeing him adopt the persona of a swear-crazy man-child was very enjoyable.  Reynolds is an actor I have only warmed to in certain roles, but after going through his usual Reynolds shtick in the beginning, I was really impressed by how well he was able to channel a Bateman-like character.  It helps that these two have been friends in real life and have a very easy chemistry with one another on screen.  Not much to say about the supporting cast, aside from the fact that Mann delivers a familiar performance, while Wilde is fun enough, and Alan Arkin arrives in this film, only to be completely underutilized.  Additionally, as far as the filmmaking goes, there was an awful lot of CG noticeable in the film, and I am not just talking about the much publicized false nipples. 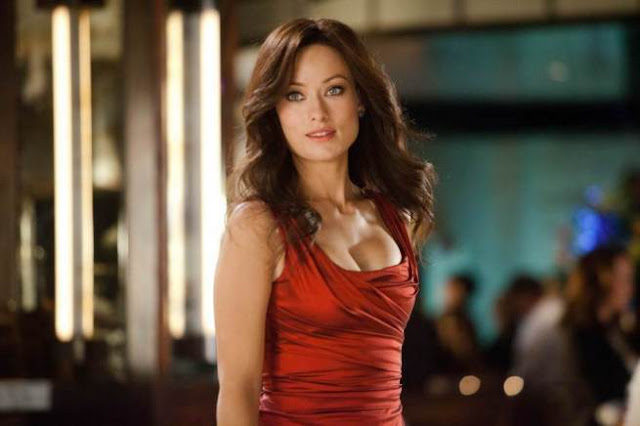 I can’t say this is a harmless comedy, as the R-rating and the types of gags in this film forbid me from doing so, but it is a pretty easy one to enjoy, given the right audience.  It does nothing to improve upon a very tired plot, but it does have a lot of fun playing up its silliness and letting two likable and funny actors swap places in their comedic acting abilities.  Plus, the opening gross-out gag alone made for a scene that I never thought I would have needed to see, but there it was, all over the face.

Dave:  For the first time in your life you’re good looking, you’re single; what’s going on between us, it’s crazy, but what’s even more crazy is not to use it.