‘Conan’: It’s Like Watching A LARP Match, But Gorier! 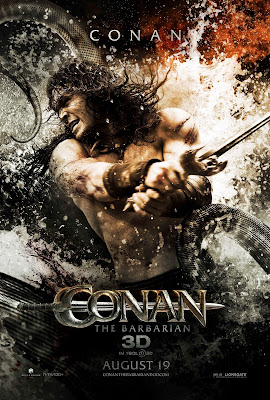 Conan The Barbarian: 2 out of 5

Conan the Barbarian gives the viewer everything that they would be expecting…if they did not have their expectations very high.  The movie has plenty of macho ridiculousness and is filled to the brim with violence and CG blood and gore.  It is not a good movie by any means, but I did laugh a lot.  Once you see your lead character literally born on the battlefield, delivered via C-section by your father’s own sword, there are few things to do but have a good laugh at the whole thing.  Really, the only question I have to ask is why did this movie need to carry on for nearly two hours?  I guess it was to ensure the delivery of all the “aaaarrrrggghhhs” in the movie.  An “aaaarrrrrggghhh” that isn’t long enough isn’t worth delivering. 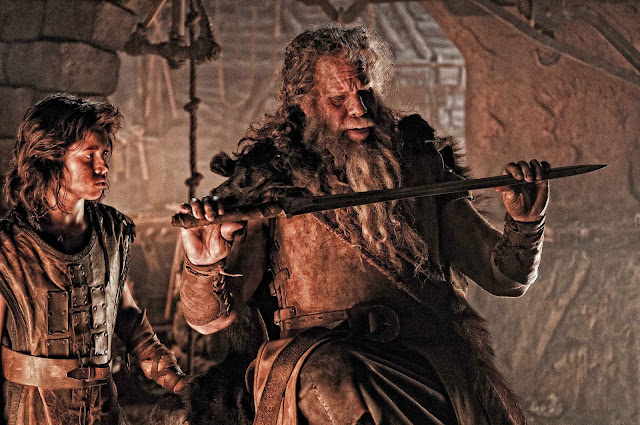 Conan begins with an info dump narrated by Morgan Freeman (missed opportunity – James Earl Jones, but hey it’s Morgan!), which establishes a bunch of sorcery and ultimate power mumbo jumbo.  After this, we find ourselves in the middle of a barbarian battle led by Corin (Ron Perlman, w/full beard).  His wife and mother of the soon to be delivered child is killed in battle, right after naming her newborn son Conan.  Following this battle, the barbarians return to their peaceful ways, with Corin training all of the young lads to be efficient killers by racing with eggs in their mouths.  Young Conan (Leo Howard) quickly establishes himself as a boy born to kill.
The barbarian peace is soon interrupted, once the evil invader Khalar Zym (Stephen Lang) and his men take over the town.  Zym is in search of a sacred bone, which he finds within Corin’s possession.  Zym takes the bone and leaves Corin’s fate in the hands of young Conan.  Essentially forced to let his father die, Conan vows revenge on Zym and all his men.  Years later, Conan has now grown into the muscular form of Jason Momoa, who possesses the strength and skill of many, the blood thirstiness of starved piranhas, and a nice smile.  If Momoa, Chris Hemsworth, and Chris Evans got into a macho towel snapping contest, I would suspect few who desire these large men to look away. 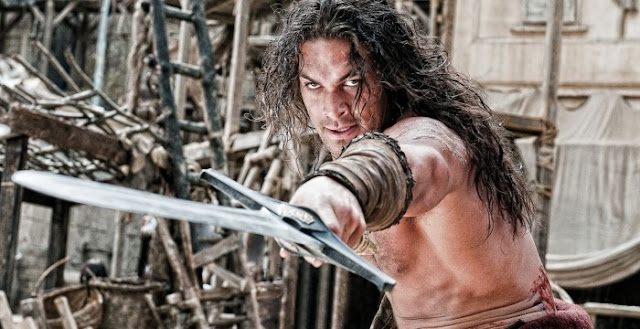 Now, Conan travels around fighting anyone who is in some way bothering him or his unclearly established ideals, with a long term goal of finding Zym and murderizing him for good.  Meanwhile, Zym has established himself as a powerful lord and seeks a pureblood woman (cue Rachel Nichols as Tamara).  Zym and his powerful bit…witch daughter, Marique (Rose McGowan), stop at nothing to capture Tamara for the sake of some powerful ceremony, even if that means taking on Conan, who manages to intervene with desires to achieve his long sought goals.
Well I managed to have fun summarizing this movie, so I guess that sort of describes my attitude about this film.  It makes no sense to try and take this premise or this character seriously.  However, the 1982 John Milius film did try and take Conan seriously and it succeed in its own way.  While that film is no classic, it was at least solid in making Conan’s plight seem worth it.  In this film, I can get behind watching Conan beat the crap out of almost everything that moves, but it would be nice if I at least knew he cared.  While this film has a plot that involves getting vengeance, the cocky attitude of Conan and his fairly unaffected demeanor suggests he is pretty content with his life as is.  If Conan does not seem to care one way or the other about truly seeking out his father’s murderer, why should I?  The film avoids answering this question (and many others) by having Conan find some info by chance, so we’re on the path with him to get what he wants, but it still seems like a big objective has not been properly handled. 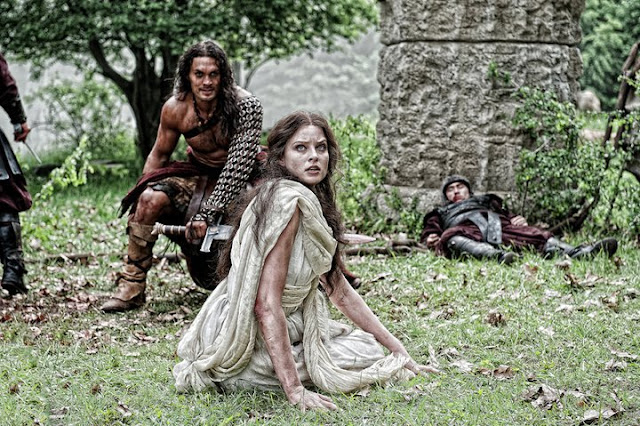 Maybe it is because I was legitimately into the opening twenty minutes of this film.  They are over-the-top, yes, but Ron Perlman is over 60 and still crushing skulls like one of the best of ‘em and the intensity of Howard as young Conan was surprisingly effective.  Once we get into adult Conan and Momoa’s portrayal of him, complete with meathead dialogue, I was over his plight.  I feel I appreciate Momoa’s acting on the HBO series Game of Thrones more now, as his character on that show mostly growled and spoke in another language, yet came off incredibly effective.  One would think Conan is not too far removed from the Khal Drogo character, yet I didn’t really like Momoa as the barbarian bro seen in the film.  Lines like, “women, come here,” are fun and all, but there was a lack of Arnold or Rock-like charisma that left me wishing for more.
Director Marcus Nispel continues to function as one of the slickest blood and gore-producing directors hired on for studio film work.  His previous horror remakes Texas Chainsaw Massacre and Friday the 13th were exercises in stylish dead teenager movies, but here he gets to once again try for a period action epic (like his film Pathfinder, which few saw or cared for).  The results are mostly what one would expect.  The film looks slick and revels in having squishy, soft enemies constantly landing on incredibly hard surfaces, leading to lots of CG bloodshed.  I did appreciate some of the early fights and a fairly clever sand creature battle, especially since there was a good amount of focus on not pushing the camera so close; however the many battles in this film did eventually get a bit repetitive.  This film rarely has a scene that does not end with a sword coming into play, but when it does slow down for bad exposition dialogue or “character work”, it definitely suffers from weird pacing issues. 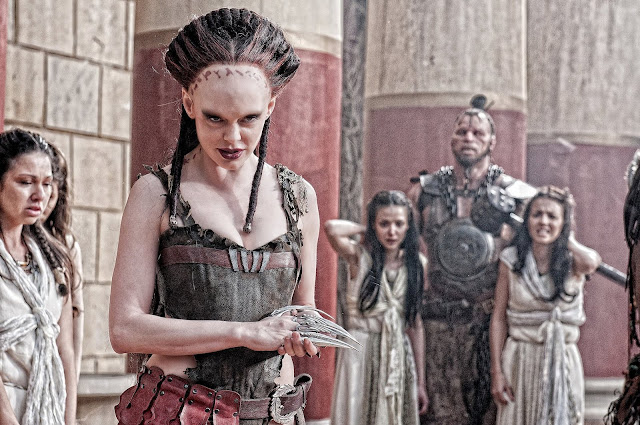 I have not tried to recommend this film at all because I do not think it is very good; however, I have not said avoid it either.  As it stands, Conan is just kind of empty inside.  There are good ways to make this film, but what I saw only stood as a poorly executed story balanced by nonstop action and goofy dialogue.  It has no real personality behind it and I doubt I will remember much about it within the next two weeks.  It also did not help to see so many scenes in Conan resemble scenes I had previously seen this year in Your Highness.  By the way, I also avoided the 3D post-conversion for the film and went out of my way to see a 2D showing.  I am glad too, because watching this in 3D may have been the true destroyer.

Corin:  The sword that we make will be yours one day, but before you use it you must earn it. 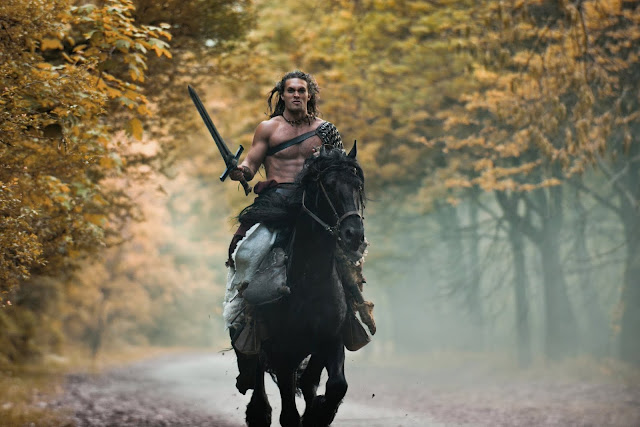