See A Bunch of Stars Fall In ‘Crazy, Stupid, Love.’ 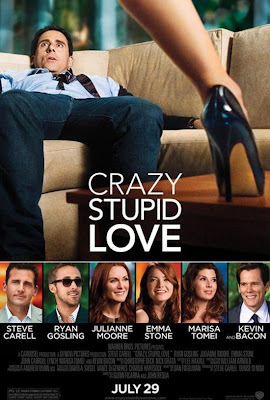 Cal’s Boss:  You’re getting a divorce?
Cal:  Yeah.
Cal’s Boss:  Amy heard you crying in the bathroom.  We all thought it was cancer.
Cal:  Oh…
Cal’s Boss:  Thank god, man!
Cal: No, just my relationship.

With several weeks’ worth of action films out of the way, it is now time to step back into the realm of romantic entanglements involving a lot of attractive people dealing with the complications of maintaining relationships.  Crazy, Stupid, Love benefits from having a lot of very good actors dealing with mostly solid material, while bringing forward the qualities that make these people likable to begin with.  It is unfortunate that the movie does not pull its weight all the way to the end, sacrificing its knowing sense of irony in favor of a more clichéd and sitcom-like finale.  Regardless, audiences can still be treated to watching an endearing cast wade through familiar, yet fun material, as they act a little crazy and a little stupid for the sake of love. 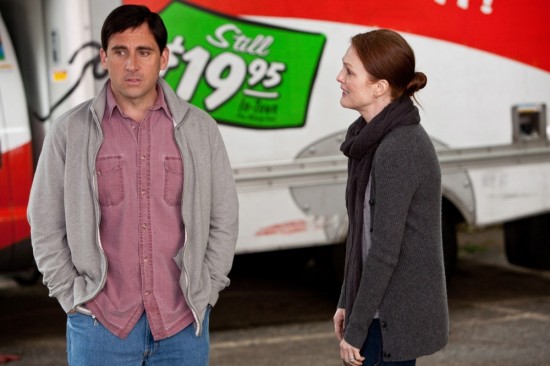 Steve Carell stars as Cal Weaver, a man who is married with children, seemingly living the dream, until his wife, Emily (Julianne Moore) suggests divorce during a dinner date in the opening minutes of the film.  Making things worse, Emily reveals to Cal that she has slept with her co-worker, David Lindhagen (Kevin Bacon), which prompts Cal to jump out of the car in motion to stop himself from hearing more.  Moving on, Cal moves into an apartment and attempts to move on by visiting a local bar and get himself back into the game.  This goes poorly at first, because Cal has been out of the game for twenty-five years and only goes on about his marital issues.  Cue Ryan Gosling’s character, who intends to change everything around for Cal.
Gosling plays Jacob, a thirty-something ladies man, with all the right moves and the right words to say in order to never go home empty-handed.  Out of pity, Jacob decides to be Cal’s single-man mentor figure, and helps him accessorize himself properly (new clothes, hair, etc.) in an effort to get over his wife and regain his manhood.  As good as Cal gets at bagging the ladies, his heart still wants one thing.  Meanwhile, Jacob actually finds his own sort of predicament, as he becomes overtaken with feelings for a beautiful woman, Hannah (Emma Stone), who proves to mean more to him than just another conquest.  And these two only represent a third of the romantic trials and tribulations presented in the film, as we learn of issues that involve ex-wife Emily, as well as her and Cal’s son Robbie (Jonah Bobo) and his crush on his babysitter Jessica (Analeigh Tipton), who in turn has a crush on Cal.  And around and around we go. 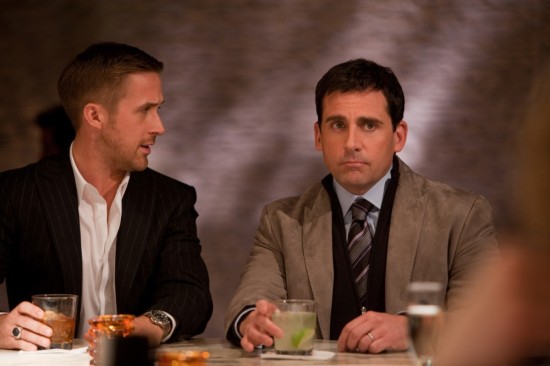 The unfortunate fact is that this film edges towards being something better at many points, only to ease up and settle for less.  The fortunate fact is how likable this cast is and how much I enjoyed the chemistry between everyone.  Navigating between these two facts is where things become difficult, as I did like the movie overall, but it did not reach anything beyond the realm of an average, albeit slightly wittier, romantic comedy-drama.  It was as if the screenplay by Dan Fogelman served as a fairly familiar romantic story, with a slight upgrade given to the film, thanks to the presence of directors Glenn Ficarra and John Requa.  Ficarra and Requa are the duo responsible for writing Bad Santa, as well as directing the underseen Jim Carrey film (finally released this year) I Love You Phillip Morris.  While not credited as writers, I would like to think that the moments when the film becomes sharper are when the directors added their own input (some interviews I have read seem to confirm this).
Sticking with the good aspects, I will once again praise this cast.  I really liked what the main stars of the film brought to their roles.  Steve Carell manages to pull off wounded and confidence in separate instances of the film, which I found to be believable.  The transformation aspects of his character, thanks to Gosling’s character are the film’s brightest spots, which was benefited by each performer.  When it comes time to hit the dramatic portions, Carell does a lot with subtlety here as well.  Gosling, on the other hand, gets to have a lot of fun as the showy ladies man character, who literally has a couple of over-the-top “introduction into a scene” moments, complete with slo-mo establishing shots.  In addition to being made to look incredibly attractive to…well everyone, he is pretty hilarious in the way he uses his techniques both in practice and in training Carell.  Later scenes that deconstruct his character are greatly beneficial as well. 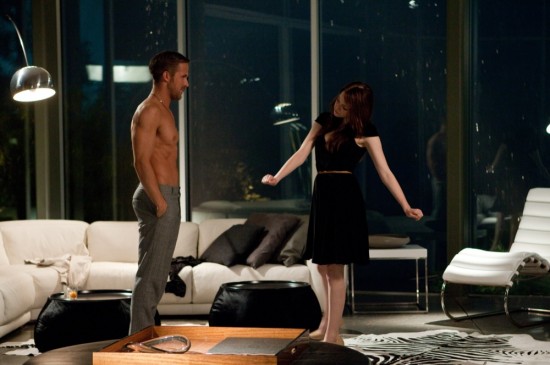 While Carell and Gosling are essentially the leads, the strong female cast helped out quite a bit as well.  Julianne Moore plays her role in a way that feels entirely familiar for the actress, but still hits all the right beats for what she is given to do.  Emma Stone is surprisingly not as prominent as some would think until later in the film, where she really has one key sequence to completely leave her mark.  It is fortunate that she absolutely nails it, continuing to build on the qualities she has already previously shown in other films as a fun, quick-witted, and very attractive actress.  I also found newcomer Analeigh Tipton (and her puppy dog eyes) to be adorable, given that her part is written to be exactly that way.  I was a little disappointed in Marisa Tomei however, mainly because this film did not give her much to do after a point, which is unfortunate, because I really enjoy Tomei on screen.
Where this film falters for me is in its attempts to have things both ways, when it comes to defying its own genre, while also submitting to its rules.  There are moments when the film transcends some of the standard structure by having characters call out their own actions and acknowledge the “game” that they are playing.  There is even an instance where an individual directly makes note of a situation as a cliché.  However, as the film reaches its climax and resolution, it doubles back on itself, and fits right into a formula, to the point of having a big scene where one character gives the “what I’ve learned/how I’ve changed” speech in front of all the major characters in a large public setting, which in itself is a cliché.  It is not a matter of being against a formula, but the film easily chickens out on sticking with its more interesting angles.  Add to that a number of sitcomy misunderstandings that do fuel a good amount of laughs, but also have the tone feeling a bit too loose towards the end. 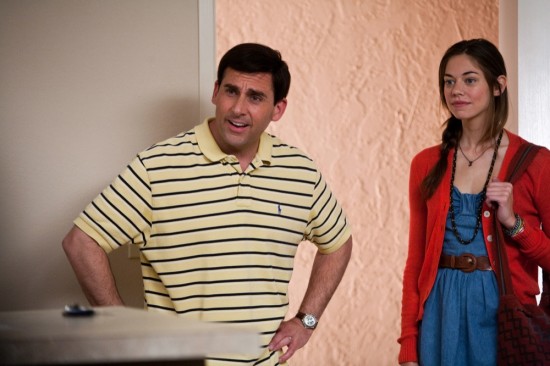 It can become easy for me to get too hung up on specific aspects of a film, but they are the types of things that justify why I walk away from a film with a certain point of view.  This film is very entertaining and well handled for a good portion of the runtime.  Unfortunately that quality does not carry over into the final section of the film, where the balance between crazy, stupid, and love becomes cumbersome.  Still, a strong cast full of talent at least had me admiring what was brought to the table in terms of performances, chemistry, and comedic riffing.  Plus, this film is much better than a majority of the shallow rom-coms that hit theaters.  Uneven, but many clever, humorous, and even romantic moments keep the film watchable overall.  Plus, the film does bring the Bacon. 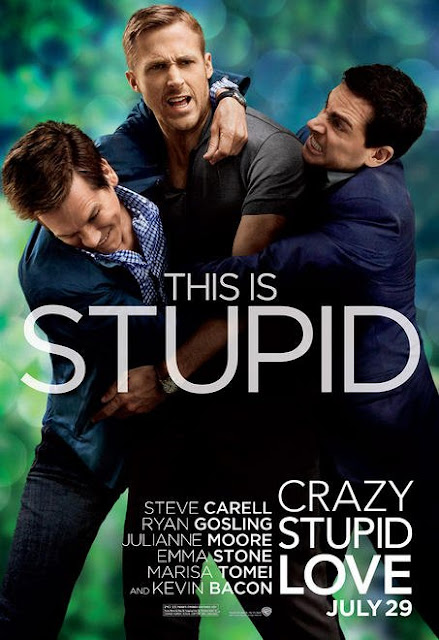