‘Hangover’ New Moon: The Wolf Pack Is Back 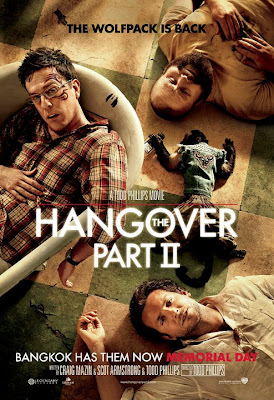 Stu:  Oh my god, we kidnapped a monk.

Before I get to explaining (in more words than I have to) that if you laughed at the first film, then (minus the originality) you’ll probably enjoy this one, I want to list some of the alternate sequel titles that my friends and I came up with for The Hangover Part II:  Hangovers, 2 Drunk 2 Hungover, Hangover 2: Hung Harder, and Hangover 2: Bangkok Dangerous.  With that out of the way, let me just say that I really enjoyed the first Hangover.  I built it up in my mind to be something amazing before it was released in the summer of 2009, and somehow the film delivered.  Very funny, quotable, and rewatchable, not to mention quite cinematic and well made from a filmmaker’s standpoint.  With this new film, I did not try to build it up as much.  The first film seemed to come out of nowhere, but surprised audiences with an original premise as a mystery comedy of sorts, while I only expected more of the same from its sequel.  I could not have been more correct about my assumptions, as this film presents almost the exact same premise/beats as the first film, except in Thailand.  While Hangover Part II follows the form of most inferior sequels, I can’t say that I did not laugh a lot throughout the film anyway. 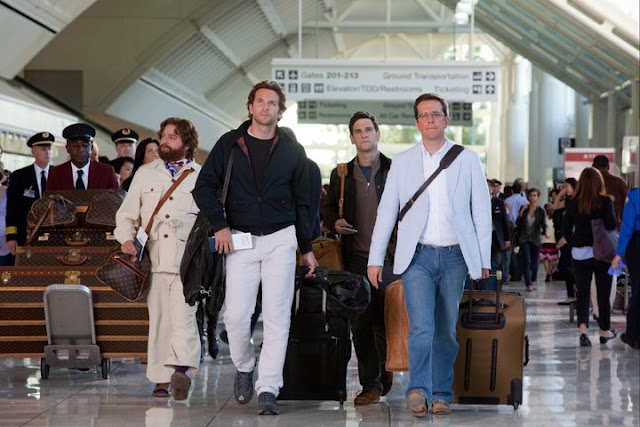 So the whole gang has returned for a follow up.  Taking place some two years after the events that occurred in Las Vegas, Stu (Ed Helms) is getting ready to marry a new love in his life, Lauren (Jamie Chung).  Stu has planned to have the wedding in Thailand, where Lauren’s family is from, and has invited his friends, Phil and Doug (Bradley Cooper and Justin Bartha) and their respective wives to come along.  Much to Stu’s dismay, Doug convinces him to bring along Alan (Zack Galifianakis) as well, who cherishes the memories of the grand time that he had with the boys in Vegas, which includes posters in his room made up of some certain photos.  Also joining the guys on their trip to Thailand is Teddy (Mason Lee), Lauren’s 16-year old brother. 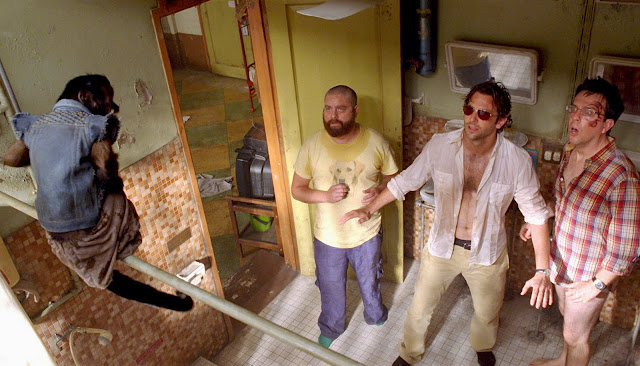 If you are familiar with the first film, then the drill is pretty simple from here.  After a rehearsal dinner, the guys have a little late night bonfire on the beach.  A toast is made, some beers are consumed, and then night shifts to morning, as Phil, Stu, and Alan wake up in a seedy room in Bangkok.  In a state of obliviousness to the wild events of their previous night, new surprises are in store for the guys as well, including haircuts, a very visible tattoo, and a monkey.  Fortunately, this time, Doug is actually not missing, he managed to sit the night out and stay back at the hotel.  Unfortunately, Teddy is missing and the guys must now find him before the wedding and before Bangkok swallows him up for good.  It now becomes an adventure for the guys, as they try to retrace their steps through the streets of Bangkok and solve the mystery of their lost Teddy.

[About Stu’s tattoo]
Phil:  Yeah, throw some water on it, maybe it will come out. 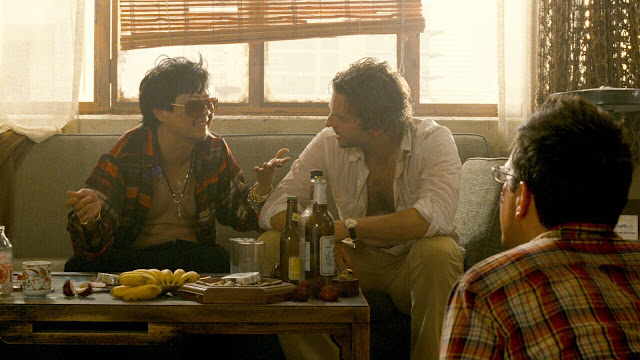 After the first Hangover became one of the highest grossing comedies of all time, it is easy to see why there would not be much pressure to change up the formula of what made that film work.  At the same time, this film does not win any awards for originality.  Besides expanding the scope of the film to Thailand and utilizing a larger budget, the Hangover Part II is pretty much the exact same film as the Part I.  It would be less noticeable if some elements were switched around, but no, the film literally copies the exact same structure of the first film, including character arcs, plot reveals, and the ultimate resolution.  I am not saying this to spoil anything, but I do hold it against the film for not trying very hard to distance itself from its predecessor.  I think a lot of the fun in the first film came from the fact that it actually had a story to tell and managed to create a compelling mystery narrative, which does not occur often in a comedy.  This film loses that edge, because we have already seen this story.  There is a new mystery, and it’s not like you really need to be scratching your head over the answers, but that freshness of the first is gone. 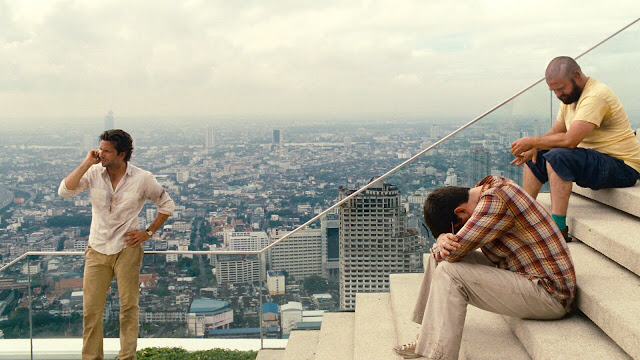 Now despite the “more of the same” vibe, the film is still very funny, if one was a fan of the first film’s sense of humor.  With a number of really great laughs and a lot of good chuckles throughout, I did have a fun enough time watching the film.  The cast has been brought back together, unchanged, for a reason – Phil, Stu, and Alan make for a hilarious trio.  Bradley Cooper continues to excel at being the likably dickish sort of glue that holds the team together.  Ed Helms has to balance freaking out at his indiscretions with trying to keep things grounded.  And Galifianakis must continue to channel his strange, overgrown child-like persona.  There are not many shades added to any of these guys, but they all still seem to be having a good time together.  It doesn’t hurt that the film found a way to bring back Ken Jeong’s Mr. Chow character either; and he is suitably way over-the-top.

Alan: When a monkey nibbles on a penis, it’s funny in any language. 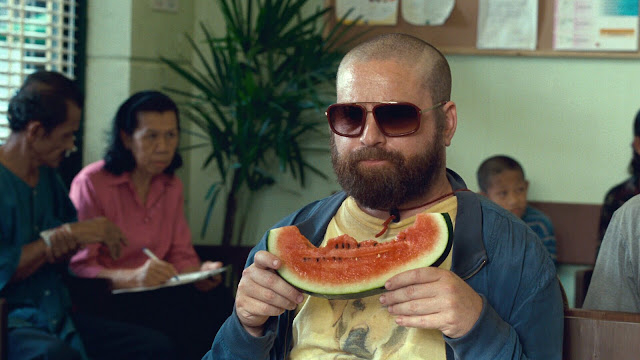 I don’t want to call into question whatever it is that makes these guys do such horrible things when they get super wasted, but I will say that them reflecting on and learning of the results of the previous night continues to be a great way to generate laughs.  While I don’t think the film has something as great as the reaction to, “An F-ing tiger in the bathroom,” it does have some priceless moments of realizations and discoveries.  Not in the least has the film been toned down; it is a super R-rated film all the way.
Director Todd Phillips continues to impress as a filmmaker as well in terms of his cinematic touch on this film.  Shot in widescreen, with some great views of various areas in Thailand, there is certainly a deft eye taken towards making this film look great.  Nice soundtrack too.  Whether it be establishing shots early on and setting up the tone or some subtle ways in which the camera pans around Bangkok, I enjoy noticing some clever work on the part of the crew who put this film together.  And I know it must have been a pain to work so much with a performing monkey on set. 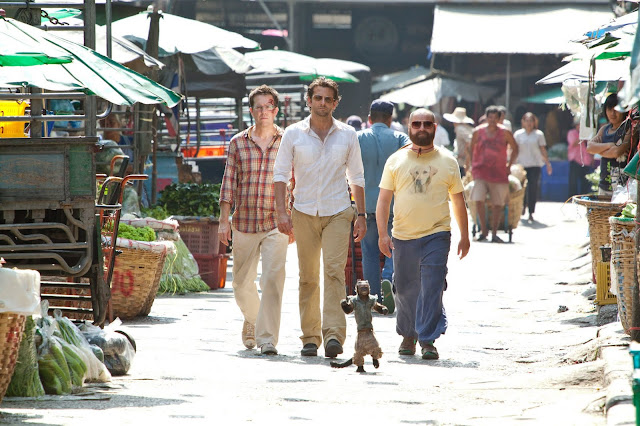 There is that group of people that were no big fans of the first Hangover.  If they did not like it then, then they probably won’t be able get on board now.  This sequel is very much a repeat with a new location and some slick tricks up its sleeves to make things appear grander.  I do enjoy the first film a lot, and while this next installment does not try to shake things up in the least, I still had an amusing time watching it mixed with a number of huge laughs.  I am not sure what can be done with the inevitable Part III, but I have not exactly grown tired of these guys yet either.  As far as big summer comedies go, The Hangover Part II is a lot of crude, disturbing fun.

Phil:  It’s ok, the bullet just grazed my arm.  Eight stitches; it only cost six bucks, how is that possible? 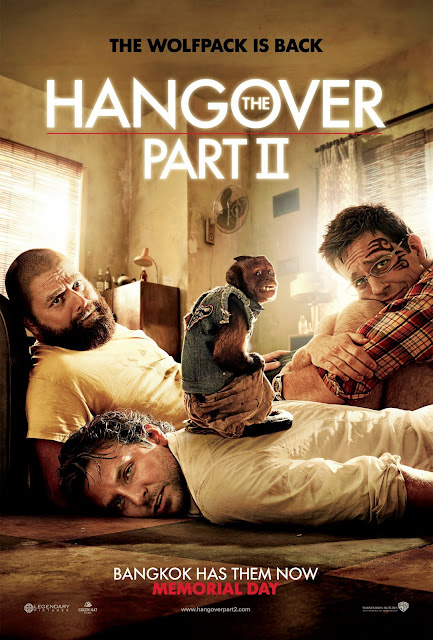