‘Scream 4’ Stabs Its Meta Soul In The Face 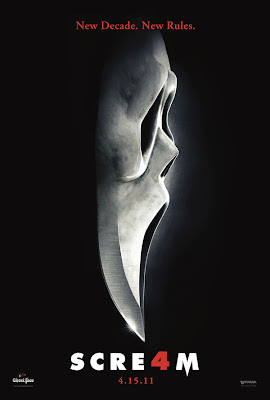 Charlie: The unexpected is the new cliché.

I had a chance to watch the opening of Scream once I got home, after watching this third sequel.  I think those 10 minutes may be the best thing that director Wes Craven has ever done.  The sequence has a lot of fun playing with convention, ratcheting up the tension, and then paying off in an effectively gruesome manner.  Craven has made other very good films in the past and has created a couple horror icons, but I honestly don’t think he’s made a good film since maybe Scream 2 in 1997.  Despite having made the worst film of 2010, I was holding out a small shred of hope that Craven could revisit his groundbreaking franchise, along with its screenwriting creator, Kevin Williamson, and successfully reestablish it into a new decade of horror satire.  While Scream 4 does find plenty of things to say and have some fun, the film is too self aware for its own good, while still winding up back into traditional clichéd slasher territory far too often. 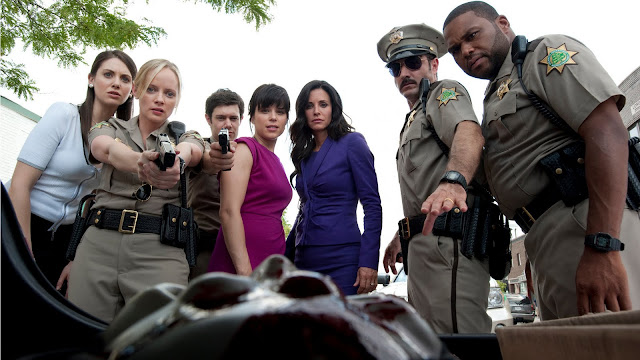 Ten years after the events of Scream 3, on the anniversary of the events that took place in the first film, heroine and all around survivor Sidney Prescott (Neve Campbell) has returned to her hometown of Woodsburo, to promote her new book.  She has plans to stay with her cousin Jill (Emma Roberts) and her aunt (Mary McDonnell), while making her rounds for book signings with her publicist Rebecca (Allison Brie).  Things quickly escalate out of control once again, as a new masked killer(s) makes his/her/its presence known, calling and murdering folks around town who have any connection to Sidney…or do they…yes they do.
Back on the scene are Scream vets David Arquette and Courtney Cox, as Dewey Riley and Gale Weathers Riley, who reside in Woodsboro and must both face the past as well.  Now married, Dewey is now the town sheriff, while Gale has since retired from her reporter life, having gone on to write several fictional sequels to the books that recount the real events of Sidney’s past.  Dewey of course wants to solve the crimes, while Gale seems to be more interested taking back on the guise of a reporter who can get a huge scoop if she is cunning enough. 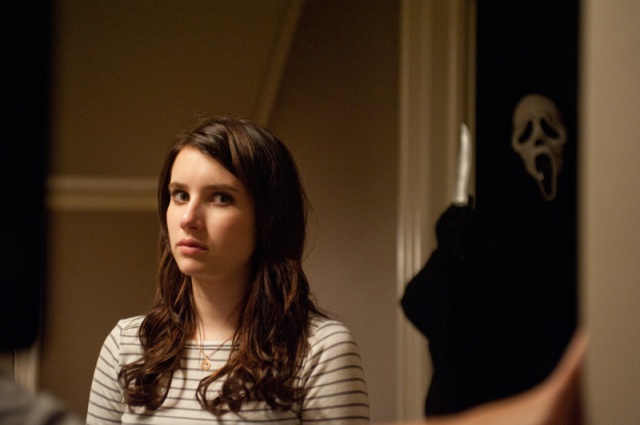 Among other potential suspects/victims are Hayden Panettiere and Marielle Jaffe as Kirby and Olivia, Jill’s best friends, Marley Shelton as Dewey’s number one deputy, Rory Culkin and Erik Knudsen as a couple of film club geeks, and Adam Brody and Anthony Anderson as a couple of bumbling cops.  Mayhem and deconstruction ensue as the characters toy with their own mortality by discussing how the rules have changed in a horror world now ruled by torture porn, found footage films, and tons of reboots/remakes.  By the time the bodies dwindle down and the killer is revealed, all of the rules will become much more apparent and deadly.
Always trying to keep things fresh and clever, Craven opens the film with another well done, pre-credits kill sequence, which immediately puts the audience back in the realm of what the Scream films had attempted to do, while certainly acknowledging the times people currently live in.  It manages to be funny, self aware to the extreme, surprising, and quite bloody.  It also happens to be the peak moment of the film, as things go downhill the rest of the way. 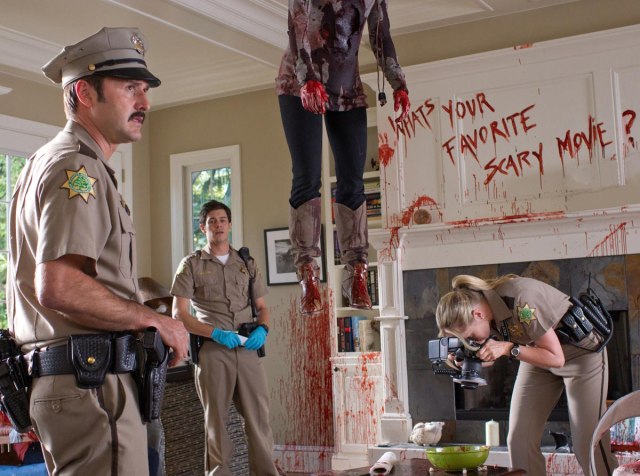 An important thing to note about this film is that it is much more a comedy than anything else.  Brief moments of suspense come in the form of playing exactly off of what the audience expects to happen, even after the characters have just blabbered on about knowing what should be coming.  There are plenty of jump scares and high music cues, but it is rare for any of these not to feel telegraphed.  But maybe the movie knows this.  Given that this franchise has spent over a decade pitting characters against the rules that they already know exist and playing off of layers of meta commentary, surely the film has to be aware of how aware we must be in its own awareness, right?  Is that statement too aware?  Are their dreams within dreams? 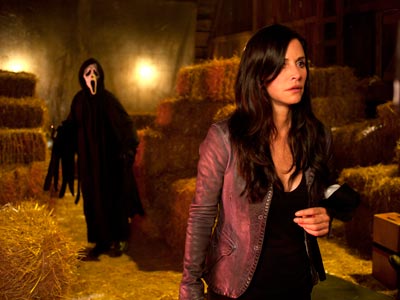 Writer Kevin Williamson seems to be having fun.  I feel like he must have designed two or three killer scenes (obviously the opening is included), which revolve around addressing the place that these characters would be in now, and then had to construct the rest of the film as well.  As a result, it goes on for far too long (I must also point out that production trouble led to minor script touch ups by Ehren Kruger), piling on the bodies and bloodshed, while characters continue to exist in a world where they know a killer is on the loose, they know the game he is playing, and they should (presumably) know how to play that game, yet still walk around as if they are completely safe.  It’s a world that breaks the bounds of satire and just becomes silly, which makes the film silly; no longer clever enough to sustain a story that was looking to be a smart take on its own subject matter. 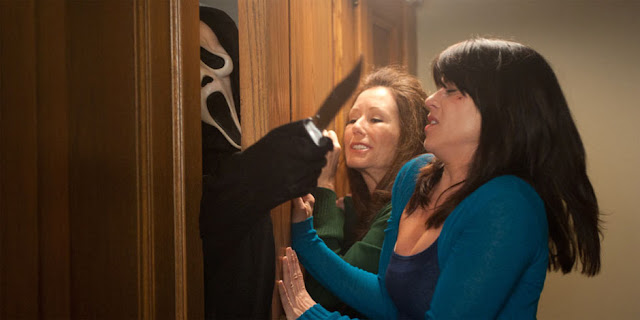 As far as the filmmaking goes, Craven does bring his A-game.  The ads have been throwing around the title “master of suspense,” which I don’t think holds water at all, but I can say the man does know how to film some killer scenes.  The killer continues to be a slasher, but this time around Ghostface is pretty damn brutal.  People get stabbed all over, innards become outards, and lots of the red stuff gets all over.  It never becomes too much like some of the films it makes fun of (Saw), but the Craven gets the job done.
I have to also admire some of the layers this film does have.  While the story is pretty much inconsequential at this point in the series, some of the meta stuff going on is kind of fun.  The Scream films continue to have the film-within-the-film stuff going on, as Stab and its sequels make their return here, which becomes especially neat when the characters watch those films, acknowledge their place as modern classic horror cinema, and even experience both that and their own reality simultaneously. 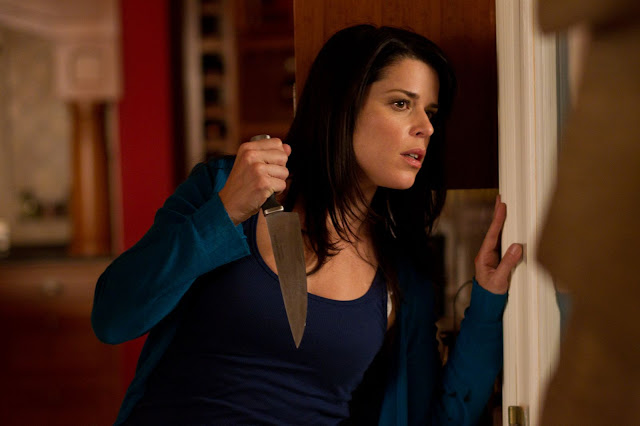 Some of the actors do decent work here.  Neve Campbell gets a lot more to do here than she did in Scream 3, but she certainly still owns the part of the franchise lead.  Arquette and Cox have always had good chemistry together, and it still plays to the strengths of these characters.  Roberts tries to capture the spirit of 90s Campbell to some avail.  Panettiere manages to have a lot of fun in her role as the best friend and savvy horror expert.  The most fun came from Allison Brie (of Community and Mad Men fame), who manages to show some wicked humor as the press obsessed publicist.  This may actually be the most bodacious of all the Scream films, as Craven has cast an assortment of pretty girls (many cameos) to star in this film, many of them played by actual teenagers this time. 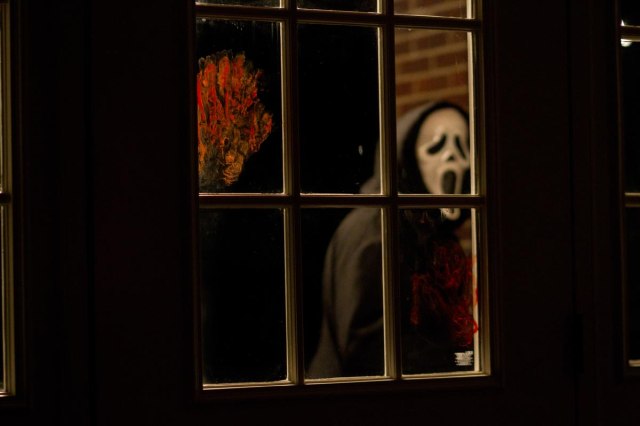 It is a shame that this film steps on its own toes way too many times to have been better.  There is a lot of creative ground to cover in the years since its past sequels have come out.  Sure, the film does acknowledge the state of modern horror and it manages to deconstruct some of those elements and have a lot of fun at the same time, but it just becomes tiresome over the course of this overlong, supposed thriller.  The opening scene is killer; the middle is chatty and bloody, but never really exciting; and the end revelation is appropriate, but far too drawn out.  Craven manages to carve out some cleverness, but most of the film cuts too deep in its own self parody.

Ghostface:  Time for your last question: name the remake of the groundbreaking...
Kirby:  Halloween, Texas Chainsaw, Dawn of the Dead, The Hills Have Eyes, Amityville Horror, Black Christmas, House of Wax, Prom Night, My Bloody Valentine! It's one of those, right!? 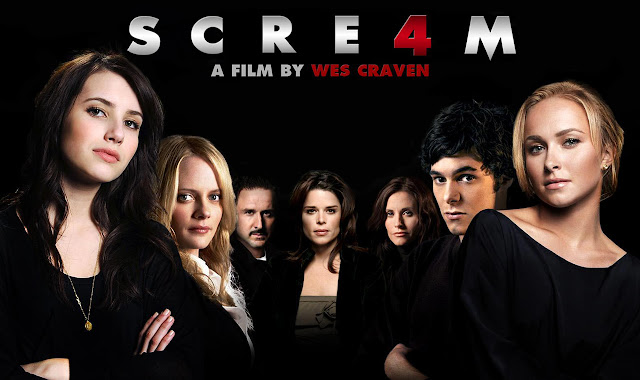