You’d Be Lucky To Cross Paths With ‘The Adjustment Bureau’ 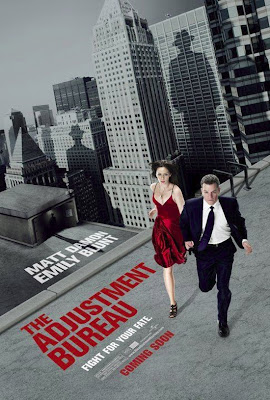 Richardson:  You’ve just seen behind a curtain that you weren’t even supposed to know existed.

There can be a lot of fun had when you put together two different genres of film.  In the case of The Adjustment Bureau, a romance story is mixed with sci-fi fundamentals.  I put romance before sci-fi, because this film is very much a love story that happens to have a sci-fi twist and not the other way around.  I have a feeling many will be expecting more of a thriller, based on the marketing, but this film is a story about two people trying to overcome their odds to be together.  There are some clever chase scenes, but there are also no guns involved in this story, which I hope does not put people off.  Me, I was just intrigued by how nice all of the character’s hats looked.  And it also helps that the story is intriguing enough and the leads are quite good together.
Matt Damon stars as David Norris, a New York Congressman, hoping to be elected to the Senate.  On the night of the election, David unfortunately loses to his opponent, but something special also happens.  While practicing his concession speech, David meets Elise (Emily Blunt).  David and Elise quickly strike up a very warm and friendly conversation and briefly kiss, before the two are separated, leaving David with no way to contact her.  A month later, David, as if by chance, happens to sit next to Elise on a bus, and the two have another great conversation; however, this time David manages to get a name and number. 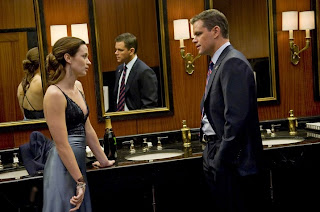 There is a problem with this situation though.  It is apparent that this occurrence on the bus was not supposed to take place at all, as a mysterious, but well dressed man, Mitchell (Anthony Mackie of The Hurt Locker), was ordered by another man of the same description, Richardson (Mad Men’s John Slattery) to cause a situation that would have made David miss the bus.  Because of this event, David arrives at a meeting early, sees something he should not have seen, and is taken to an empty warehouse. 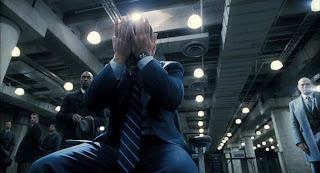 Richardson then explains the situation to David.  Apparently there is a large team of people (who have been referred to as many different names during their lifetime) that are in charge of monitoring and adjusting the events of people’s lives according to their individual plans that are set for them.  There are various rules explained and revealed over time, but the main point is that David may never talk about what he has seen, or else he will be reset (lobotomized basically).  Also, David is not allowed to ever see Elise again.  David now faces quite the predicament, as he has overwhelming feelings for Elise and is not planning on letting anything stop him from getting to be with her.

Thompson:  If you truly love her, just walk away.  If you stay with her, it not only kills your dreams, it kills hers. 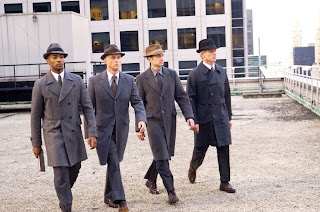 There is an awful lot of summary here, because the film does have an issue of explaining a lot of what is going on.  There are a lot of moments that are back and forth between either having David sit and listen to what he needs to know versus listening to the adjustment team speak in semi-vague phrases about what is going on.  It is an obstacle that the film fortunately gets over, because despite some of the heavy exposition, the movie is quite entertaining to watch.  I am sure someone way more nitpicky that me may be able to find flaws in this film’s logic, but once I got past the idea that David had to basically conceal the fact that he knows a pretty huge secret of the world, I was on board with this movie.
A key for this film was having the romance be believable, and I found that to be the case here.  Damon and Blunt have solid chemistry together, exchanging some fun banter, while also developing the kind of spark that these Hollywood stars need for this film to work.  In fact, the movie does a good job throughout of keeping the actors together in interesting and entertaining ways.  The film has the sort of tone that it needs in order to serve as an intriguing romantic chase drama, as opposed to a sci-fi chase thriller.  There is a light touch to the film that works in its benefit, as opposed to making things much darker than they needed to be for the story this film is trying to tell. 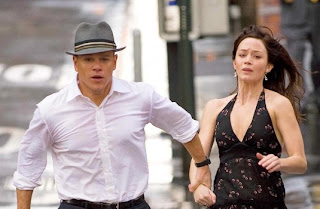 The other actors in the film are all quite good as well.  Mackie does solid work as the conflicted meddler, who maybe growing more of an attachment to the subjects of his work than he should.  Slattery is having a lot of fun in his role, which is also a benefit to the film, because if these characters were supposed to be super serious throughout, the film would have ended up coming across much goofier.  Finally Terrence Stamp enters the film as well, providing a much more intimidating force as an adjuster who is not as delicate as others, which is no surprise, considering the fact that we’re seeing General Zod doing his work to seemingly stop all that is good. 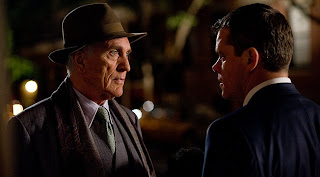 The film’s story is based off of a short story by Phillip K. Dick, a renowned sci-fi author, who has had many of his works adapted into films, including Minority Report and Blade Runner.  Along with handling the screenplay adaptation, this marks the directorial debut of George Nolfi, who does quite a good job at handling a film with a fairly large scale.  Nolfi has the film’s premise stretched to its limits, but he makes the most of all he seems to have.  The use of New York locations in this film was particularly impressive.  There are many shots that have the camera let you see a great amount of depth in the scenes.  In a day where there is so much work done on close ups and tight editing, I was happy to see so many widely framed scenes. 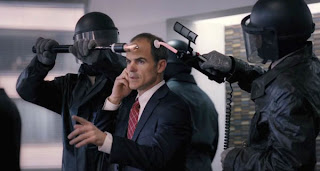 I have put a lot of emphasis on the romance angle that this film has, but I can also say that a lot of the fun this film has stems from the rules the adjusters have to follow.  Due to a particular part of their wardrobe, the adjusters can enter all doors in a different way that will lead them to different spots all over the city.  For example, opening one door at Yankee Stadium could suddenly transport you to Liberty Island.  Given that the film focuses a lot on David trying to match wits with the adjusters, it becomes quite fun to see chases through a labyrinth of random doors unfold. 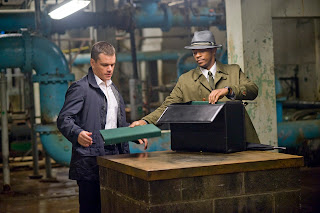 The Adjustment Bureau could have collapsed under its own weight very easily if it wasn’t handled properly.  That being said, certain adjustments to the story or the characters could have made this a much different film, which could have also been for the better.  As it stands, the film is quite simple to follow (despite the sci-fi element that may suggest otherwise) and provides the right amount of light entertainment to enjoy.  A first rate cast and solid direction definitely benefit the film.  Dwelling on the powers of fate and chance in this film may stimulate conversation that could lead to its unraveling, but I can still take pride in enjoying a chase film that did not resort to a higher escalation of violence for a change, along with the fact that this film did feature some pretty cool hats.

David Norris:  I don’t care what you put in my way, I’m not giving up. 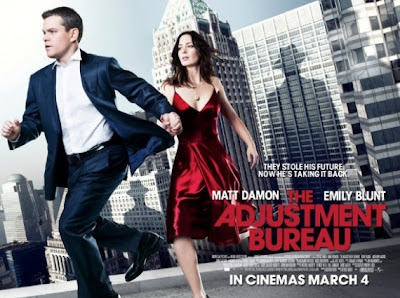