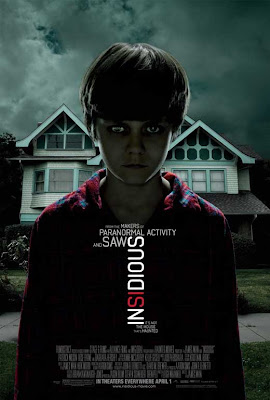 I think perception plays a key role when one makes a decision about going to see a horror film.  While I would not say I am a snob when it comes to horror films, I do consider myself pretty choosey about which ones I see, especially when it comes down to what the film is rated.  In recent times, there have been a slew of films that have either been focused on extreme amounts of gore or copping out with cheap “jump scares” in order to secure a PG-13 rating.  There are always some exceptions (Sam Raimi’s Drag Me to Hell immediately comes to mind), but for the most part it is the latter pattern that is followed, with studios churning out lame PG-13 horror flicks (usually remakes) that lack actual suspense and horror.  Fortunately, the subject of this review, Insidious, managed to be one of those exceptions and functioned as an effectively scary piece of work.
For putting this film together, two worlds collided, as Insidious is the product of collaboration between the makers of the original Saw (James Wan and Leigh Whannell) and the makers of Paranormal Activity (Oren Peli, Jason Blum, Steven Schneider).  The results are effective, as there is both an original story present, which defies some conventions, while still adhering to some of the best elements of this horror subgenre.  As always, I will keep this review spoiler-free, but the best way to sum up this film, is by saying it starts out as a haunted house movie and then becomes something else. 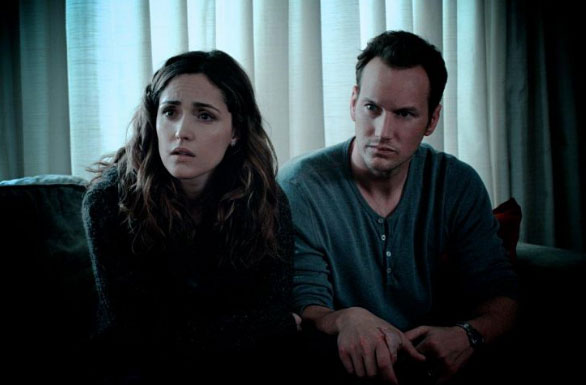 I will keep it very light on describing this story.  A young family moves into a new house.  The parents are played by Rose Byrne and Patrick Wilson, and they have three children; a baby girl, a young boy - Foster, and the oldest - Dalton (Ty Simpkins).  One morning, Dalton is found to be comatose, but with no simple explanation.  As more is learned about Dalton’s condition, more abnormal situations begin to plague this family as well.  If only it was just simple enough to move.
Going into this film, I was really expecting to see a creepy kid movie, which is certainly suggested by the poster.  I was surprised to see that it was really, as I have stated, a haunted house film that becomes something else as it goes on.  While everyone has their own preferred type of horror movie that scares them, creepy kid movies tend to do it for me, yet with the rise of haunted house movies (given the popularity of the Paranormal Activity films), I am happy to be concerned about the foreboding creaks around a house and the bumps in the night. 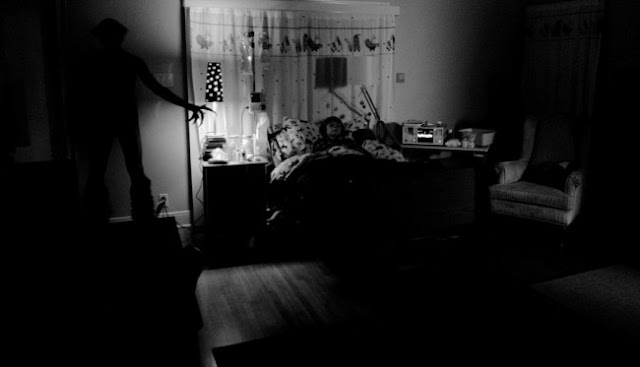 The biggest concern for this film is going to be how it handles its scares.  Given that it is rated PG-13, many may already be initially turned off.  I will also point out that “jump scares” do play heavily in this film, but they occur with purpose and are earned.  There is a good amount of time spent on the setup and building of actual suspense before delivering on the payoff.  The film has an intense score when it comes to striking the harsher notes to maximize the audience fright potential, but also wisely plays things very silently when building up to many key moments.  It makes all the difference to me by having a film that smartly plays with what it is that can scare a person, and this film is the product of filmmakers who understand how to make proper horror. 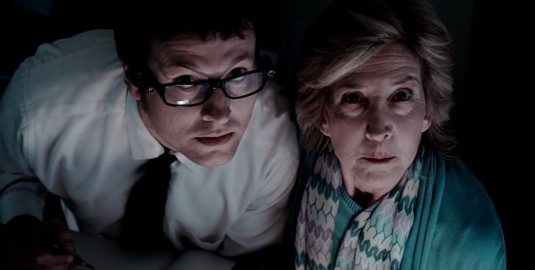 Speaking of those filmmakers, I should address what I know about them and how this film was made.  As I have stated, this film has been directed by James Wan and written by Leigh Whannell, the duo behind the original Saw film.  I have argued many times as to why I do not think Saw was a good film, but I have also expressed, at many times, my enthusiasm for the guys who made it.  Insidious comes now after several other features these guys have worked on, and it shows.  This film has been shot for an even lower budget than the first Saw, but the experience gained since then is clear.  There is a better focus on how to handle what occurs in this film and as a result, I found it to be a more engaging and entertaining experience.  I should also note that this film was shot basically as an independent film.  No studios meant that this film would be cheaper, yes; but also handled with the desired intent.  As it was shot digitally and edited by the director, Wan, the film has a notable feel of not seeming like another generic horror entry (despite the marketing attempts to make it seem as such).  There is a clear sense to the visual style, which (along with the fantastic sound design) can add a ton to making a horror film all the more effective. 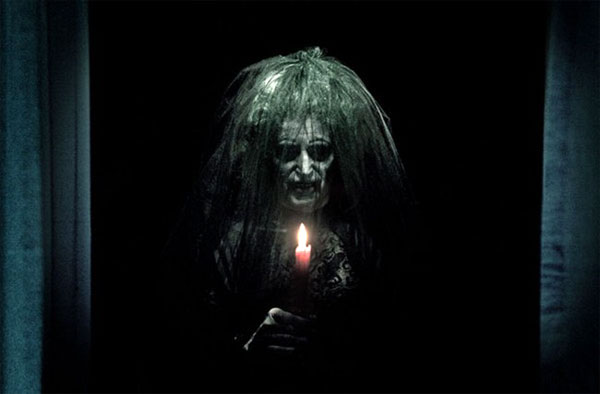 There are only two places I feel it stumbles, preventing the film from being great.  While there are some neat switcheroos and plays against convention, I still think the flick was a tad predictable, although my moviegoer brain tends to work overtime when dealing with horror films.  I was also removed a bit by the need for explanation.  While some of the elements we come across are interesting, I think too much was explained regarding certain elements, while other aspects could have been explored a bit more (sorry for being vague, but I am always happy to discuss these thoughts more with people after they have seen the film).

The most important is that I found this to be a horror film that actually had horror in it.  It presents a story that has original elements, but is also not beyond having fun with the staples of this sub-genre.  The film is very well put together, with solid camera work and handling of the atmosphere for the sake of maxing out the tension.  Best of all, it is not super serious.  I tend to dislike the types of horror films that have the characters constantly moping around and this film wisely injects a good amount of humor into both the characters and in the way some of the scares are presented.  I have a feeling that this film will not exactly light the sky on fire in its theatrical release, but I at least hope that it finds an audience, because solid horror filmmaking is a rare find these days.

Elise:  I don’t think bad wiring is the problem here. 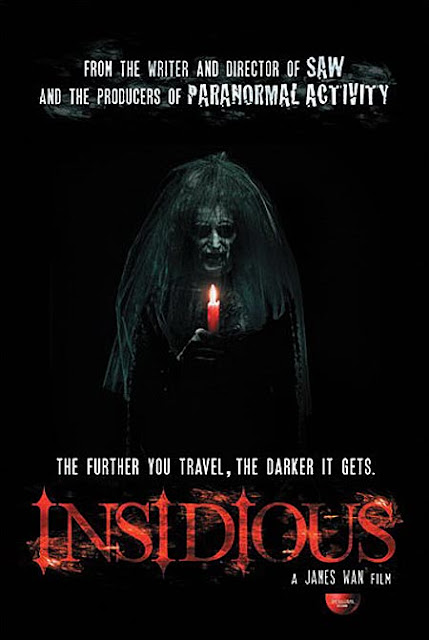