‘Peep World’ Is An Uneven Look At A Dysfunctional Family 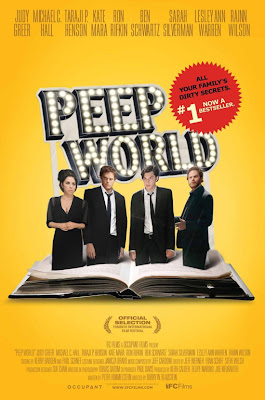 Joel:  Do you think that I’m a failure?
Mary:  Who said that?
Joel:  My father; my family; pretty much everyone I know.

There are ways to make a dysfunctional-family comedy work.  Arrested Development will go down as one of the great comedy television shows of all time, because of the wide range of talent split between all of the different members of the family, the dynamic of those relationships, and how super sharp and hilarious the writing was.  Peep World feels like an attempt to recreate the spirit of that sort of show and push all of the similar themes into a story that only spans 90 minutes of screen time.  The result is very uneven, as there is a great cast present, but the writing is not nearly as sharp or funny as it needs to be.
The film stars Michael C. Hall, Sarah Silverman, Rainn Wilson, and Ben Schwartz as siblings Jack, Cheri, Joel, and Nathan.  Nathan has released a book, titled Peep World, which has been met with huge success and is being adapted into a film.  The problem with this is that Nathan has based this story exactly on the lives of his family (including every dirty secret), which becomes a source of embarrassment for all of them, except for their father, Henry (Ron Rifkin), who Nathan has made out to be a saint, despite the truth being very much the opposite.
The film takes place over the course of a long day, where the various family members all prepare for a dinner in honor of their father’s 70th birthday.  Jack is the oldest son and looked at as the good one.  He is married to Laura (Judy Greer), who is pregnant with their first child.  Unfortunately, Jack is also struggling in his architect business.  Cheri is an unaccomplished actress, but still does her best at being a diva.  She is currently suing her brother Nathan over the book.  Joel is the black sheep of the family, having been in and out of rehab and always borrowing money from Jack.  Finally, Nathan is the youngest, with delusions of grandeur regarding his book, despite being an awkward fellow, with a problem of his own that extends beyond just how honest he was in his book.  All of these characters spend the day coming to terms with each other and the dislike of their father, hopefully moving on to a better place by the end of the night. 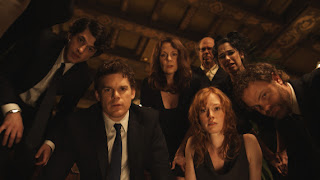 There is nothing in this film that really needed to be handled in an original manner.  The only thing that was required was a good amount of comedy, and this is easily where the film stumbled hardest.  There are a number of moments in this film that do accomplish that task, mostly stemming from three of the main leads, who do enough to overcome how clichéd some of these standard dysfunction-family film elements feel.  However, there a lot more misses than hits overall, which do not do the film any favors.  What’s funny is how strained a lot of the broad comedy feels versus how effective some of the darker moments are.  Writer Peter Himmelstein seems to have constructed a film that combines the aspects of two different types of comedies, but neither the writing nor the direction by Barry W. Blaustein seem to have found a way to appropriately balance the tone. 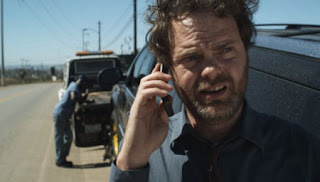 As far as the performances go, I think Hall, Silverman, and Wilson all do solid work, with Wilson in particular hinting at becoming a solid dramatic actor, given the right material.  Having just started to watch Dexter, I am pretty absorbed into everything Michael C. Hall is doing, so it was interesting to see him playing the straight role in this film.  Of these siblings, however, Schwartz’s work as Nathan comes off as the weak link, which is mostly due to him being saddled with the weakest subplot involving the visit to a doctor (I don’t feel like going into the particulars on that one).  It is also worth noting that Lewis Black provides the films narration, which is both fun, but also makes me wish the film achieved more.  I would also be remiss if I didn’t mention that the always welcome character actor Stephen Tobolowsky makes an appearance, and although his role is small, I enjoy seeing him pop up in these roles. 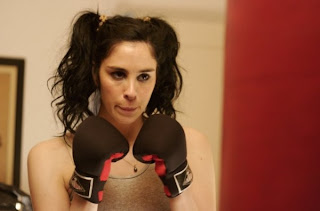 There is almost one saving grace to the film, and that is the big dinner scene, where all of the family members gather, true emotions are revealed, and lots of self-discovery occurs.  I could probably guess that much of this film was written around this climax, as many of the best and sharpest lines are delivered here.  The performances in this scene all come together nicely, but the film still does not get past making it any different from other, similar films, which includes the broad, comedic end to the sequence.  Given that the plot revolves around getting to this dinner, it is both an effective part of the film, but also a bit of a missed opportunity.

This film will only be out in limited release, so I doubt many will be able to catch it anytime soon. Still, the film is not very good.  It has some funny moments and features a strong cast, but unfortunately the story and writing is not up to task in making these characters and the situations they are in more compelling.  It is a shame, but that’s how it is.  I like a good comedy, but when the jokes don’t hit, that will easily show.  I would happily see a lot of these actors team up again, I just hope it would be with a better written script.