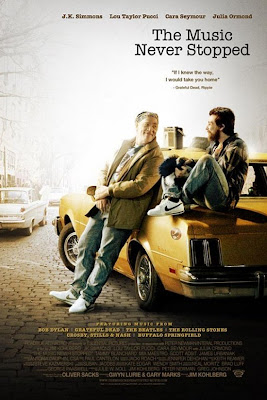 Diane:  We may be able to use music as a tool to reawaken parts of his memory.

Films like The Music Never Stopped fall into a line of films that are easy to absorb on the surface.  They are heartfelt dramas, usually based around true stories, relying on significant events to make you feel deeply for those affected by them.  This is not a bad thing, but these types of films do straddle the line of becoming too “Hallmark Channel” for their own good.  It is fortunate that the lead performance by character actor J.K. Simmons is so strong and sincere, that for all its faults, the movie nearly gets over its notions toward pulling at the heartstrings, instead of being more subtle in its intentions.  I liked this movie, but I am also on to its game.
The film is set in 1986.  J.K. Simmons and Cara Seymour play Henry and Helen Sawyer, a married couple living in New York suburbia.  They receive a phone call, and it turns out to be from the hospital, informing them of their estranged son, Gabriel (Lou Taylor Pucci).  Previously an angry argument turned into a 20 year disappearance, so Henry and Helen are surprised and saddened to learn of his situation.  Gabriel has suffered from a brain tumor that is now benign, but is also preventing him from creating new memories.  Henry is eventually tasked with spending the majority of his time trying to bond with his son, but struggles with the fact that Gabriel is very non-responsive. 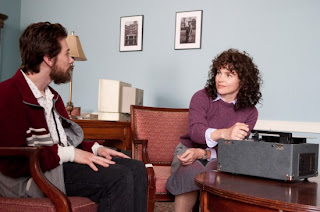 Henry is able to begin a healing process of sorts when he brings in a music therapist, Dianne Daley (Julia Ormond), who begins to play old rock albums, which Gabriel was obsessed with during his days as a teenage hippie.  When songs by such groups as The Beatles, Bob Dylan, and especially The Grateful Dead begin to play, Gabriel suddenly springs to life, recalling many events that transpired in his past.  While Gabriel has a hard time determining the time he is now living in, it is a step closer for he and his father to reassemble their relationship after a falling out.
I will get to why this film falters for trying too hard to make the audience cry, but one big problem came in the form of Pucci’s performance as Gabriel.  This is a central performance for the film, but unfortunately, I was not very affected by the portrayal of either version of Gabriel in neither flashbacks to his young hippie days or in his later days under hospital care.  I would not necessarily say he was bad, but the performance called enough attention to itself that I found it distracting.  I needed to warm up to what he was bringing to the film, which is not a good place for an actor to find themselves. 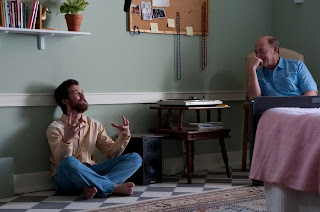 The film also suffers from being overstuffed with drama in a very overt way.  Of course this film needs to communicate its story, but many scenes felt too much like they were hitting the same points again and again, while many others seemed to be shot and edited in the way that would best get an emotional reaction out of its audience. 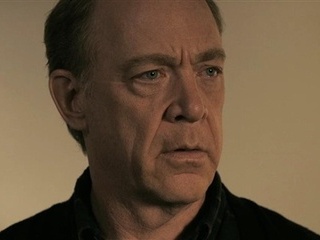 Fortunately, I am not soulless, because as much as I could see through what this film was playing at, it was, at times, effective in the way some of these dramatic moments played out.  At its core, this is a film about a father and son rebuilding their relationship, and by the end of the film, the payoff to this notion has the qualities that made it feel right.  Certainly helping this aspect is the work from J.K. Simmons.  Many will recognize Simmons instantly, as he has many credits and a recognizable face and voice.  In this film, he gets a chance to really pull off many different states of this father character.  He has a warmth to his performance, which has him both making you laugh and feeling effected by how unfortunate he is for not being able to have kept his son in out of harm’s way.
Good work in this film from several supporting characters as well, including Cara Seymour as Gabriel’s caring mother, Ormond as the therapist who never gets wrapped up in her own self importance, and Mia Maestro as Celia, a kind worker for the hospital.  The film is also indebted to its wonderful soundtrack, which includes many songs from many rock groups from the 60s and 70s.  The fact that so many musicians would allow their music to be featured in this film certainly suggests that they are very appreciative of the story, as this is not a film with a large budget in tow.  Finally, I have to point out that with all the drama, this film does have a good heart and features a number of tension breaking comedic scenes as well.  The film may have a problem of wearing its heart on its sleeve, but some choice moments do a good enough job of keeping a sense of humor for the film present.

While this is a fairly heavy handed, PG-rated, family drama, I can admire the story that is being told.  It presents a situation that is tough to deal with, yet grounded in reality.  Knowing about the true story behind this film was helpful, as is, once again, the presence of Simmons, who rarely gets to headline a cast.  I still wish the film was not so deadest on making sure you understood how heartfelt everything was, but it comes with the territory for these types of films.  Certainly not a film for cynics, but I do see this as a fine watch for families and some couples.

Gabriel:  This is my first Grateful Dead concert.
Henry:  Mine too. 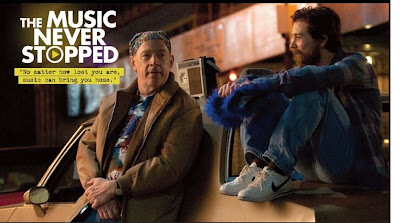