Make Sure To Bring A Game Controller To Play ‘Battle: Los Angeles’ 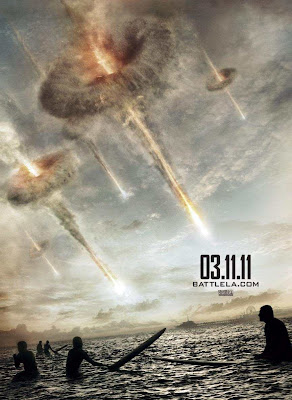 Along with many people with similar interests to me, I am a big video game player.  Recently, I have played the latest entry in the Call of Duty franchise, which I have joked around with my friends about how over-the-top all of the action and story moments are.  While watching Battle: Los Angeles, I could not help but be reminded of several different video games, along with many other movies.  I found it ironic that the production company behind this hyper real, alien invasion film was named ‘Original Film,’ because the entire film felt like a greatest hits reel from so many different films and games that I have seen and played.  However, I knew what I was getting into before seeing this film, and it certainly maintained a level of visceral thrills throughout.  I had fun watching a bunch of grunts battle an army of poorly designed aliens, and that’s all this game film wanted to accomplish. 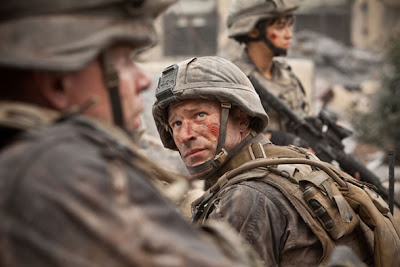 After a hint at what’s to come, the film really starts in Southern California, during the summer of 2011.  It would seem some meteorites are headed towards earth, but that’s no biggie for now, because SSgt. Michael Nantz (Aaron Eckhart) must first deal with the discharge papers he has filed.  Nantz has literally proclaimed himself “too old for this shit,” and is ready to get out of the Marines for good.  Complications ensue however, when it turns out that these meteors are actually made up of alien armies looking to invade earth.  Nantz finds himself inserted into an outfit that consists of a bunch of young marines whose names never seemed important enough for us to remember.  So you have Ramon Rodriguez as the ill-equipped Lt. in command; R&B star Ne-Yo as a corporal; a Nigerian Medic, some other young, fresh faces, and Hoyt from True Blood.  Eventually Michelle Rodriguez joins this crew too, in order to fill in for the Michelle Rodriguez-type role required for a modern day film like this. 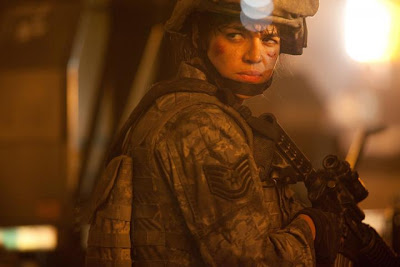 Our group of marines are taken to Santa Monica airport and given the task to rescue any civilians left at a police station, and bring them back for an evacuation, before the area is leveled by an aerial bombing.  The plan is to maintain Los Angeles by any means at this point, in order to hold back the alien threat.  The aliens in question have no mercy, are here to wipe out everyone with their advanced weaponry (more on that later) and junkyard spaceships, and have a great thirst for…well water, actually.  Whether or not Nantz and the other marines can make it through Santa Monica is one thing, but the battle in Los Angeles is certainly going to require them to stay frosty. 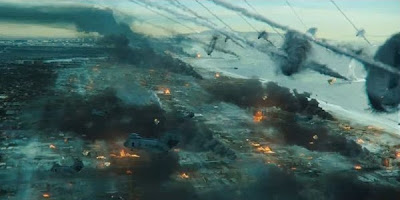 The style of this film relies heavily on the hand held camera aesthetic.  This film is very much trying to visually represent the grittiest and realistic version of an alien invasion film, serving as a fly-on-the-wall look into the lives of one particular troop, as they battle aliens.  It is an admirable idea that is of course being looked at as Black Hawk Down meets War of the Worlds, or any other number of war/alien flick crossovers you can think of (Kelly’s Heroes meets Mac and Me? How’s that for obscure?).  As a result, the film accomplishes its goal of supplying intense firefights against aliens, on a frequent basis, but also does itself no favors in staging many scenarios that one could recognize from a video game.  Sure, the intensity of war could be seen as a better launching point for comparison, but I am pretty sure this film knows the audience that it is targeting.  In recent times, we have reached a point where massive debates have emerged from the notion of embracing video games as art.  It is a film like this that certainly gives those against that notion more ammo. 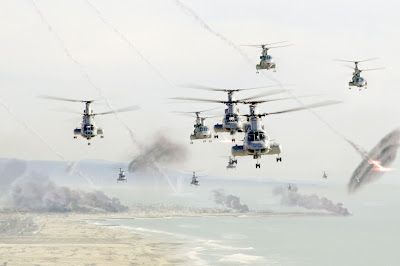 As far as how effective the style of filmmaking and the structure goes, the comparisons become much easier when considering how many different times you have seen these particular action setups before.  The beginning of course involves you getting to know these paper thin characters, only to serve up some big moments for all of them later.  I can only hope you get as much investment as you can, because you’ll pretty much be two steps ahead of them every time a new scenario emerges, and the only possible outcome occurs.  So much of this film is based around exactly all of your standard war movie moments from other films that you simply want to start yelling out orders at the screen to help the marines improvise tactics.  I don’t have much to say about the actors here, because honestly, I am sure they all did the required boot camp training, and certainly looked their parts.  Eckhart does well enough, even with the “Show’em what we’re made of,” speeches he’s required to give, and looks the part of an action hero. 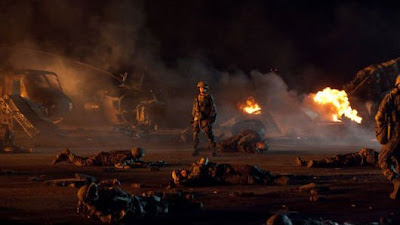 Now for some words about the aliens this movie gives us (and I swear I’ll eventually talk about the good aspects soon).  The movie presents some really uninteresting aliens to enjoy fighting against.  I would have loved to admire the design if the film ever wanted to dwell on what they look like at all.  As it stands, they are some kind of machine/creature hybrid with gooey centers.  They also fly around in ugly spaceships that seemed to have been assembled from scraps.  The weaponry and their basic functions are also plenty ridiculous.  Once again, advanced, otherworldly species have come in masterfully designed space ships, across galaxies, yet only have the capabilities of using machine guns and alien RPGs to fight against us, with no ability to create the required resources they need to power their ships on their own.  Their inconsistent battle strategies are also suspect.  At some points they are stealthy, well armored sharpshooters; at other points, they march forward and get picked off one by one.  I can only hope the next alien invasion movie I see involves a stronger set of well designed chess pieces (although, I guess that next movie will be Transformers 3). 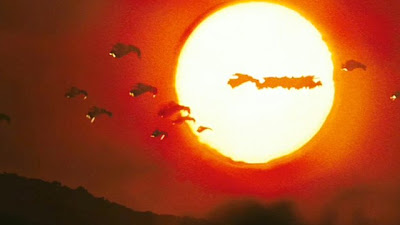 Even with all of these aspects laid out, I can still give this movie a pass.  It accomplishes what it sets out to do for the most part.  Despite how terribly cliché the big action set pieces may be, it is still a pretty well filmed slice of a war movie.  The narrow scope of the film also worked for me.  As opposed to seeing the country, or even the world, deal with this alien invasion, the focus on one particular true kept the film mostly grounded.  In addition, once this film gets passed its establishing scenes, the film rarely lets up on its excitement.  The effects are solid, even with the nondescript aliens, as the film rarely gave me a reason to think about what was digital and what wasn’t.  And finally, it is hard not to describe a lot of the fun, action moments as cool.  I may be able to do some of the same actions while playing Resistance or Halo in the comfort of my living room, but a studio spending hundreds of millions in an effort to please me on an exciting, theatrical level does give me a satisfying comfort as well.  This is certainly a big screen, popcorn flick all the way, even if it doesn’t reach the heights of other, similar films. 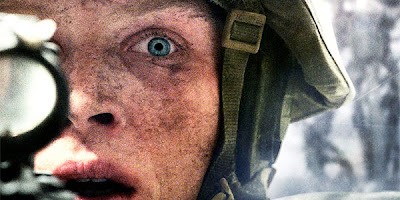 I was really game for this movie.  After seeing the 2010 (brain) suck fest that was Skyline, I was really hoping that this film would deliver something much more unique and better handled.  While Battle: LA did accomplish the feat of being the better of the two recent alien invasion movies, I can’t quite say that it is a rousing success.  It’s not that the film needed to plot out a great story or create more compelling characters; it just needed to find a voice that was more unique.  Instead, there was plenty of shouting, explosions, shaky-cam to imitate the idea of gritty realism, and patriotic rally cries, but all structured around every war movie cliché you have seen before.  There is fun to be had for sure, just make sure to have fresh batteries in your Playstation, Xbox, or Wii remote controller before watching (just kidding about the Wii, that’s more for an E.T. audience). 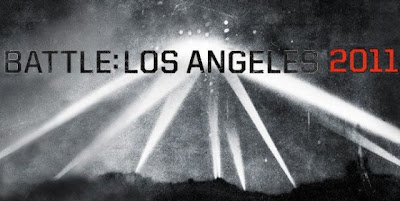