I Had A Fun, Close Encounter With ‘Paul’ 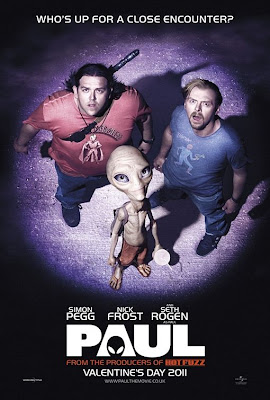 Graeme: You are an alien!
Paul: To you I am, yes.
Graeme: Are you gonna probe us?
Paul: Why does everyone always assume that?  What am I doing?  Harvesting farts?  How much can I learn from an ass?

It seems like 2011 is going to be littered with aliens and otherworldly beings.  Paul falls into that category and I feel I must clarify what it is, as the TV spots I have seen for it do really poor justice to what is quite a funny movie.  Paul is an R-rated, road trip, buddy comedy with an extraterrestrial twist.  If features a great cast of comedic actors and has been written as a geek-friendly love letter to Steven Spielberg.  The film very much relies on paying homage to tons of sci-fi films, using reoccurring gags, direct quotes, and lots of in-jokes.  While the film is very funny, it does have some hit-or-miss moments involving the lack of subtlety with its references.  Still, this is certainly a fun take on a sci-fi adventure, which is aided by the talent involved, including the special effects work on the title character. 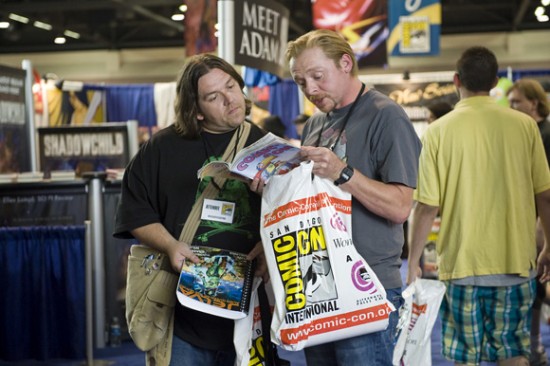 Simon Pegg and Nick Frost (of Shaun of the Dead and Hot Fuzz fame) star as Graeme and Clive, two sci-fi geeks who have come from England all the way to San Diego Comic Con, with plans to road trip in an RV across the country afterward, in order to visit all of the supposed UFO landing sites.  During their journey, the duo witnesses a car crash.  After pulling over to check out the situation, a new character emerges from the wreckage.  This character is Paul, an outspoken and crass alien voiced by Seth Rogen.  Graeme and Clive are understandably stunned. 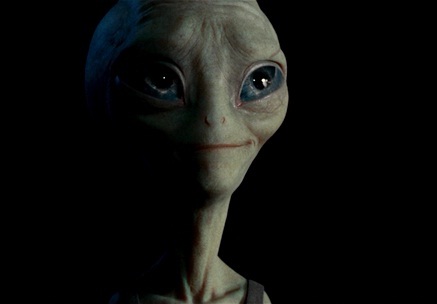 After some explanation, Paul convinces Graeme and Clive to let him ride in their RV to a particular spot in Utah, where Paul will be picked up by his mothership and returned home.  As this new threesome hits the road, a number of men in black are soon on their tail.  This includes Special Agent Zoil (Jason Bateman) and Agents Haggard and O’Reily (Bill Hader and Jo Lo Truglio).  These three all take commands from a chief at headquarters, voiced by Sigourney Weaver, and are tasked with taking out the civilians and returning Paul to Area 51.  Our heroes must avoid this trouble at all costs, along with attracting too much attention to their grey, big-headed, otherworldly friend.
The film also features a number supporting performances from Kristen Wiig as a heavy Christian, eventually changed by the knowledge of Paul; Blythe Danner as an old acquaintance of Paul; and also Jeffrey Tambor, David Koechner, and Jane Lynch. 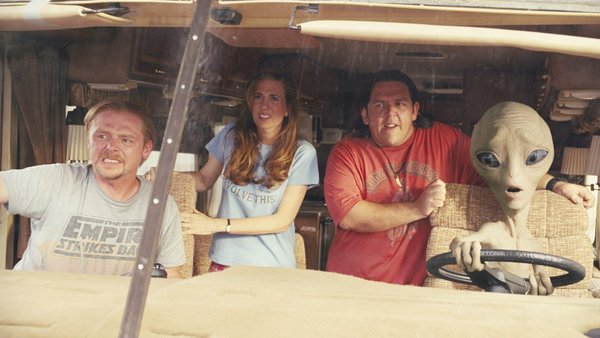 Besides the comedy, the one thing that this film needed to get right was the character of Paul.  If this character looked bad or did not establish a personality, the whole film would have suffered.  Fortunately, Paul is actually the best character in this film.  The effects work is very well handled to make Paul seem like a living, breathing character, akin to something like Gollum.  Also helping is the voice performance by Seth Rogen.  Not only does he incorporate a lot of great humor into the character, but the actual drama and intrigue surrounding him is pulled off favorably as well.  Some may have soured on him in recent times (for whatever reason, because I think the dude can be very funny), but maybe the lack of his more Rogen-esque physical presence/performance can help one to really enjoy his work here. 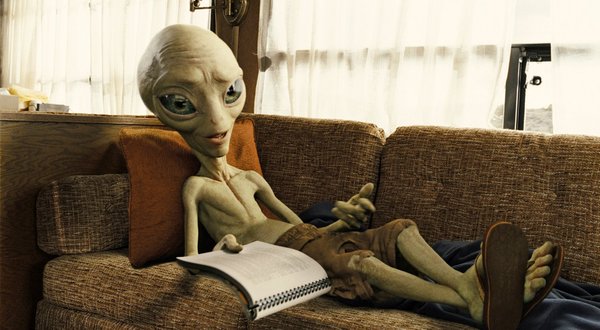 Unfortunately, Paul being the best character in this film speaks for one of the main issues I had in this film.  The script was also written by Pegg and Frost, who in the past were able to play up and create a wonderful dynamic in both Shaun of the Dead and Hot Fuzz (and Spaced, for those familiar with their early BBC show).  In this film, while they still have very good chemistry together, there is not much to their friendship to keep it more interesting.  It is an aspect that was quite noticeable, as the pairing of these two should have easily leant itself to a much more meaningful relationship, but the film does not pull off the bromance as well as it could have. 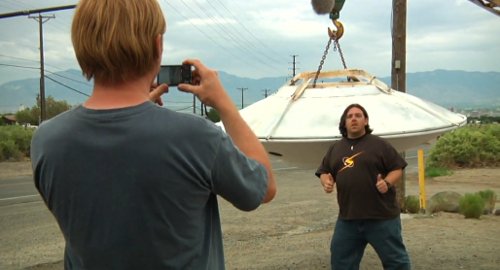 The other issue I had regarded the use of all the different sci-fi references in the film.  This is very much a geek-friendly film.  It is also incredibly layered, as I know I will be picking up tons of new jokes on subsequent viewings.  However, as much as many of the jokes are quite subtle, there are also many, especially in the second half of the film, that are incredibly obvious, bordering on spoof.  The film essentially becomes “name that movie” without much of a joke to go along with these moments.  This is the point where I really missed the presence of writer/director Edgar Wright.  Wright previously co-wrote (with Pegg) and directed ‘Shaun’ and ‘Fuzz’, which were both films paying homage to a specific type of film (zombies and action movies), with clever nods to their predecessors throughout, but managed to hold their own within the genre.  Without Wright’s touch, I think the film has opened itself up for settling into much broader and conventional territory.  It is an interesting argument to make, because the film was essentially written for film/comic book geeks like me to enjoy, but it also alienates people like me, because of how widely appealing (and non-idiosyncratic) it strives to be. 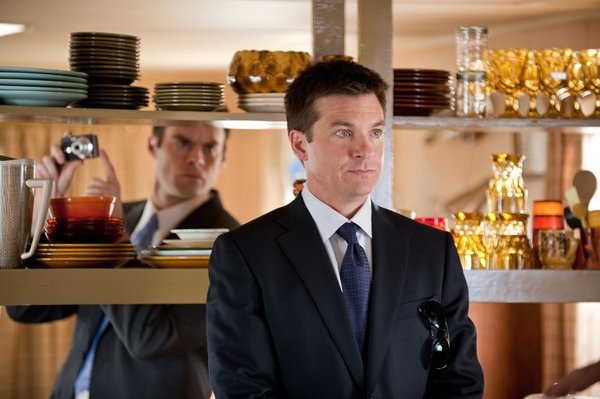 Paul was directed by Greg Mottola, an alumnus of the Judd Apatow School of comedy, who previously directed Superbad and the underseen Adventureland (a wonderful and personal story that many more should see).  Mottola is certainly in good company here, as he has a top notch comedic team and many others involved in the production, which makes this film look very good, play quite well throughout (despite my issues), and stand as a film that I will easily want to re-watch.  With all of the references made in this film, Mottola does have a fun time recreating classic scenarios to match up to the tone of this film.  I especially enjoyed the way Paul’s existence is credited to influencing society’s common perception of aliens, along with a hilarious (and very real) cameo that I will not spoil. 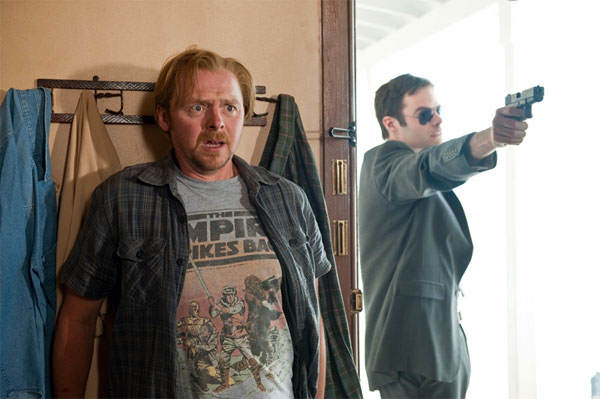 Getting back to the humor, even with the mild complaints I brought up, this is another film that features the pairing of Simon Pegg and Nick Frost, which will always bring me on board for a film.  The two do work great together, along with all of the other actors, which makes for tons of great little moments of laughter and one-liners scattered throughout the film.  While the film starts off a bit slowly, once Paul becomes involved (as well as Wiig, who is a real comedic delight) the film really does fire on all cylinders, trying to make you laugh. 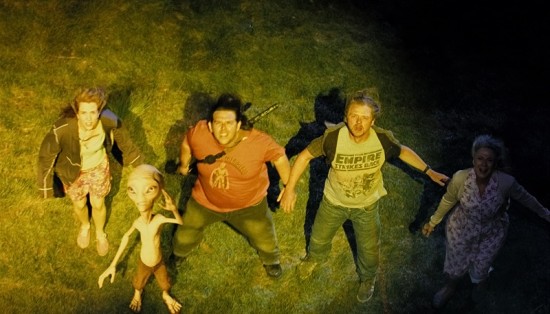 Paul is a very enjoyable film and I hope many go to check it out.  It has a fine cast of very funny people who do a good job of being quite funny throughout.  I also think that, despite my gripes, the movie is very appealing to a large audience.  Even those not as well versed in the world of comics and sci-fi (although I have noted how heavy handed the references are) should be able to get a kick out of the premise that this film presents.  It’s not quite a perfect hodgepodge of clever references and the buddy film dynamic, but it certainly has a fun spirit, which I enjoyed experiencing.

Graeme:  So what happens if you get caught?
Paul:  They cut out my brain.  But that’s kind of a buzz kill.  Let’s lighten the mood, shall we?  Clive, when did you last get laid? 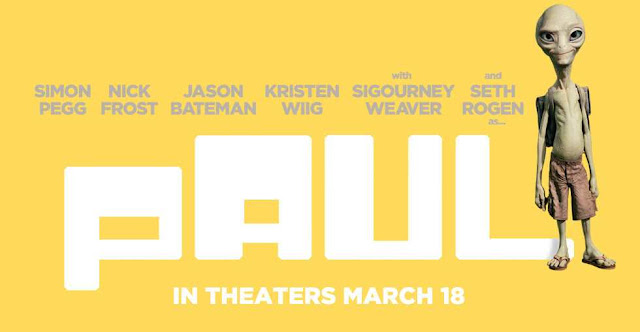