‘Sanctum’ Apparently Threw All Its Good Dialogue down a Hole 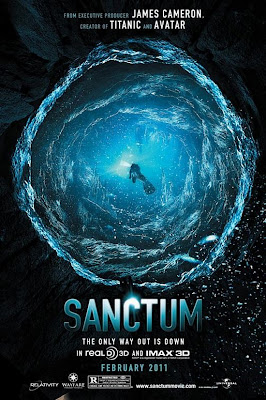 
Frank:  This cave’s not gonna beat me!

Making an underwater, 3D cave-diving thriller, with producer James Cameron in your back corner, seems like an exciting idea for a film.  Using today’s technology, there is certainly a lot of ways to come up with a well made film that can pit people up against elements such as air, darkness, and tight spaces, as they struggle to survive.  Unfortunately, nothing really helps the cause when that film is glued together by a pretty horribly written script and poor work by some of the actors involved.  Such is the case with Sanctum.  There are moments, especially towards the end, that are quite involving, but the film as a whole cannot support its nice photography and moments of actual tension with the story and characters that it provides.
The story surrounds Master diver Frank McGuire (Richard Roxburgh).  He has explored the South Pacific's Esa-ala Caves for months.  Due to a storm, the cave is forced shut, leaving Frank's team, including his 17-year-old son, Josh, (Rhys Wakefield) and the financier, Carl (Ioan Gruffudd), on their own and faced with the task of finding another way out.  The solution is to explore deeper into the uncharted caves, hoping to follow the underwater river into the ocean.  With dwindling supplies, the crew must navigate the underwater labyrinth, while dealing with various life or death decisions.  Within this story of people struggling to survive, the core of this film happens to be about a father and son learning to bond, despite having an uneasy relationship with one another. 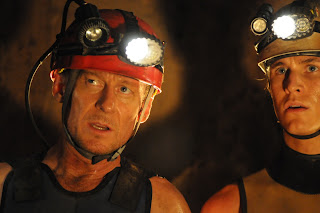 I am going to start with what bothered me in this film the most – the character of Carl.  That is correct, Mr. Fantastic himself, Ioan Gruffudd’s performance as Carl was absolutely terrible.  Somehow, this man, who has done well in other roles (Horatio Hornblower comes to mind), comes off as if he was an amateur actor here.  Despite being Welsh, Gruffudd puts on a pretty bad American accent (again, he has managed to do a better one in other roles) and completely blows his way through this film.  It was impressively bad to watch him go through various mood shifts and temperaments as the story created various ways to make his character relevant, while he yells out actions and delivers some pretty bad dialogue.

Carl:  You have to help her!

In addition to Gruffudd, the rest of the actors are similarly given little to work with.  As this is basically a disaster movie, all of the characters have fairly familiar roles.  Lead diver Frank is particularly notable for being the hardened man of the cave (saying cave man would take away from the gravity of this character), who claims to feel more comfortable underground, exploring, rather than in the real world with *gulp* people, such as his son.  Speaking of which, Wakefield is good enough in the lead role, as the young climber/diver, even if he has little to do other than clash with his father’s stern decisions, yell when bad things happen, and look good while fighting for his life to breath underwater.  Also, for the sake of misogyny, I guess, this movie seems to hate women.  Both main female characters seem to be victims of stupidity, despite being experienced divers and climbers.  The only character I actually enjoyed in this film, mainly because he was actually developed in interesting ways, died fairly early on.  So the characters are pretty much all poorly written and the dialogue is terrible throughout. 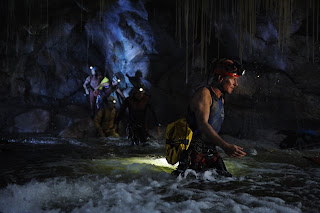 Not doing the film any favors is its pacing.  Being a film about a group of people struggling to survive, you would like to think that the film could keep the momentum going, as the obstacles these characters encounter during their dangerous journey continue to thin out their numbers.  That is not the case here.  There are lots of times when the characters arrive in a spot and rest, arrive in another spot and rest, and then rest after arriving in another spot.  The dangerous situations certainly get the excitement going late in the film, once desperation for things such as light and air become a major issue, but it feels like a long haul to get there.  Hell, I rewatched 127 Hours after this film, and seeing one man trapped in one location for 90 minutes was way more exciting. 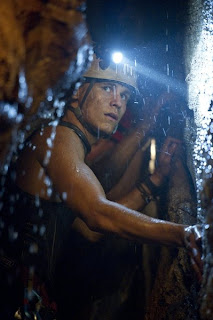 Fortunately, the film does have some redeeming qualities.  The 3D looks good.  Given that this is a film produced by James Cameron in a post-Avatar world, that seems like it would be a given, and that is the case here.  It was shot in 3D, and some of the wide shots really do a good job at selling the depth (hey-oh!) of certain sequences.  Seeing the underwater photography is quite good as it mixes the use of actual locations with some pretty solid looking soundstages and sets.  The opening shots of the film are quite nice as well, as the view of this giant cave the crew is exploring certainly makes me want to see the Planet Earth version of this movie.  There is also one sequence involving the reveal of another cave opening that I found to be quite effective.  While Sanctum is no Buried when it comes to capturing the sense of being trapped in a confined space, it did a decent job when forcing the characters to do some crawling. 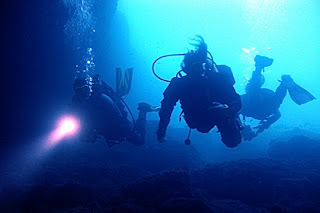 The film is loosely based on a true story, experienced by screenwriter and famous Australian underwater explorer Andrew Wight.  While it is nice to know that Wight is actually a really great guy, and managed to overcome a pretty big struggle during his lifetime, and co-write a movie about it, the script really could have used some work to make it turn out better.  As it stands, this film gets no favors from its writing and only has its photography and moments of decent thrills to stand on.  I am happy that Cameron was able to turn this Australian import into a nice enough looking outlet for some of his 3D camera technology, I just hope that much more worthwhile movies come from this eventually, as well. 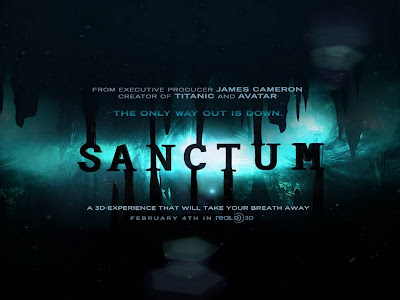