Sofia Coppola’s Latest Will Either Take You ‘Somewhere’ or Nowhere 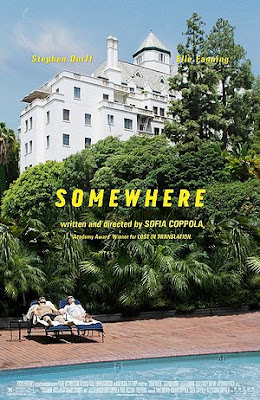 Reporter:  Who is Cleo, the name on your cast?
Johnny:  That’s my daughter.

Recommending a film like writer/director Sofia Coppola’s latest feature, Somewhere, comes with a certain kind of note:  as a person well traveled in various types of theatrical features, I found a lot to appreciate in this film; however, the way that it has been assembled and what it has to offer will most likely appeal more to those with a slant towards arthouse-type cinema and more obscure features.  I am not a fan of so specifically dropping a film into a certain category and only recommending certain people to see it, but that being said, if you know about this film already or are familiar with Coppola’s previous work, you probably know what you would be getting yourself into.
Somewhere stars Stephen Dorff as Johnny Marco, a rising Hollywood actor who seems to be spending much of his time of late in a state of boredom and depression.  Johnny is currently living at the famous Hollywood hotel, the Chateau Marmont, where he indulges in sex, drugs, and alcohol frequently.  When he tires of those activities, he spends a lot of time driving around the city in his Ferrari (the film actually opens with him driving in endless laps around a track).  There are also the occasional requirements of his celebrity life, which includes press junkets and photo shoots.  While popular with an assorted number of women who take notice of him, Johnny also has plenty who dislike him for various reasons.  This would include Johnny’s ex-wife or girlfriend, Layla, who decides to leave their 11-year-old daughter, Cleo (Elle Fanning), in his care, while she splits town.  While Johnny certainly cares for Cleo deeply, her presence merely allows him to continue to sink into a state of reflection on the choices he has made thus far in his life. 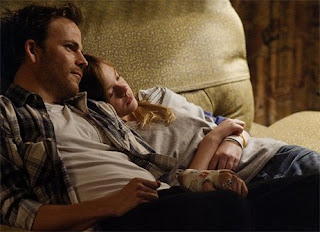 This film shares a lot with Coppola’s 2003 film Lost in Translation.  Both features focus on an individual seemingly closed off from much of the rest of reality.  Despite going through the motions of what has been required of them, they seem to be in a darker place within their own mind, but fortunately have some sort of shining light that may reignite some emotions.  In Lost in Translation, Bill Murray (who really was excellent in that role) was given some excitement by Scarlett Johansson’s character.  In this film, Johnny has his daughter, Cleo.  Both of these actors, Dorff and Fanning, manage to show a real sense of characters that have something to gain from each other.
Cleo is the daughter of a movie star and seemingly familiar with the problems that her father has, which is delivered in some of the looks she has when pointing out a careless moment or two, such as a random women joining in on breakfast one morning.  Still, while she must deal with a mother who bails and a father who probably has not been very reliable during her lifetime, she also knows that nothing is more precious to him.  It is also apparent that her cheery disposition and desire to be creative will not be hindered by the setbacks of the life she was born into.  I saw all of these aspects created by Fanning’s work as a young actress, and was glad to have enjoyed them so.  Dorff’s work is very good as well.  It is a very quiet and subdued role, which required him to act numb to the world throughout, as he addresses all of the different people in his life, but it is pulled off nicely.  Undoubtedly benefiting the film as well, is the chemistry between Dorff and Fanning.  It is not just that they look like father and daughter, but that they act like it effortlessly, and that is accomplished here. 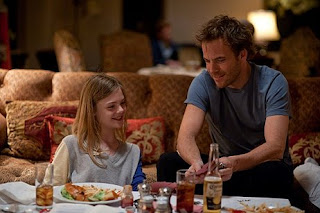 Along with the performances, the direction by Coppola has the film delivered with a very subtle touch.  Shot more like a fly-on-the-wall look at the life of this actor, one could easily have mistaken this film for a 70s, European arthouse film, if it were not for the obvious presence of the modern Hollywood lifestyle.  There are many long takes used throughout and many sequences that follow through on seemingly mundane or uninteresting affairs, such as Johnny’s driving or his staring off into the distance.  It is all evocative of the tone of the film.  Yes, it is paced deliberately slow and defies the standard notions of plot and resolution, but the film virtually delivers on all it sets out to do.
I can bring up other elements as well.  The film is quite well shot.  Set at the actual Chateau Marmont, which is known for becoming a home away from home for many celebrities.  Johnny’s living situation almost becomes another character in the film, as we follow all his activities on the floor he resides.  A portion of the film also follows Johnny and Cleo to Italy, where Johnny must attend an award ceremony.  Given that this portion of the film is set almost entirely indoors, it is a credit to cinematographer Harris Savides that the film still manages to look just right.  There is also a very subtle score by the French, alternative rock band Phoenix, which pleased me just fine. 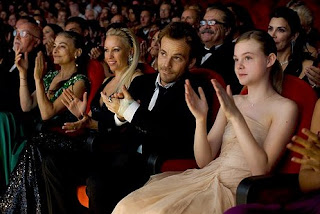 While I cannot expect to know, nor do I speculate, how autobiographical some of the elements of this film are, given Sofia Coppola’s own relationship to her father, writer/director/producer Francis Ford Coppola, I at least believe that she was able to reflect on the past and create a seemingly influenced portrait of it.  As a result, you have a film that has the semblance of something very personal and also manages to exhibit some well nuanced performances.  Like Johnny, one may not get much pleasure, but they can certainly create a lot of thought based on what is delivered here.

Johnny:  Cleo…sorry I wasn’t around more. 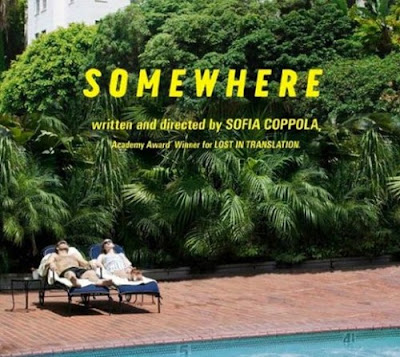