‘The Rite’ Does Right With Its Actors, But Wrong With Its Story 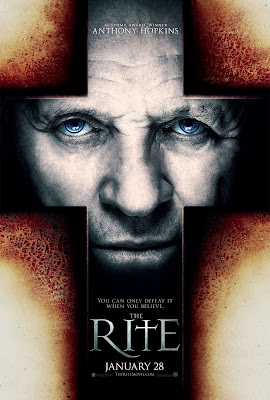 Michael:  That’s all?
Father Lucas:  What were you expecting?  Spinning heads and pea soup?

When it comes to scary movies, or at least movies that attempt to scare people, the demonic Possession/exorcism sub-genre of horror films does little to get me stirring in my seat.  For example, I think the 1973 horror classic, The Exorcist, is a brilliantly made film, but it is not a film that really gets under my skin.  That being said, what these sort of films generally have going for them is the acting on display, particularly on the part of those under some sort of possession, who must be willing to put on both an effective emotional and physical performance.  This aspect may be the one of few things that The Rite does right, but because there are so many other aspects that The Rite does wrong, I can’t really recommend this film.
Despite being top billed, Anthony Hopkins is not the star of this film; no, that credit belongs to newcomer Colin O'Donoghue, who plays Michael Kovak.  Michael is a Chicago-born son of his father (played by Rutger Hauer) who runs an undertaking business.  Rather than be bored stiff in this industry, Michael decides to enter seminary school to get away, despite already having doubts in his own faith.  Four years later, Michael continues to have self doubt, but before being able to ditch out on the school, Michael’s mentor (played by Toby Jones) sends him to the Vatican, in order to apprentice with Father Lucas, a priest specializing in exorcisms.  I was a little hazy on the reasoning, but I think it comes down to the idea that if Michael can believe in the devil, then god is a no-brainer. 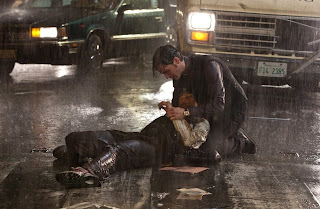 This is where Anthony Hopkins enters the film.  He plays Father Lucas, the religious ghost buster, who uses seemingly unorthodox methods (compared to the orthodox methods of exorcism that we all know and love) to deal with the various house calls he receives concerning possessed Italian children and teenagers.  The film deals with two key patients; one is a pregnant, teenage girl; the other is a young boy plagued by bites and hoof marks he claims to have been caused by a demonic mule.  Michael insists on logical explanations and psychological issues to blame for their problems, but these people are only the warm up acts for the showdown between the skeptic and the old pro.
There are some other elements to this story as well.  Alice Braga costars as Angeline, a reporter looking into the work of exorcists, in particular Father Lucas, and is of course the attractive female character for Michael to discuss his faith with.  Ciaran Hinds also shows up, playing one of the priests of the Vatican, who teaches the class on exorcism.  And there is a subplot involving Michael dealing with some dreamy elements involving his father’s business and the memory of his mother’s death when he was young. 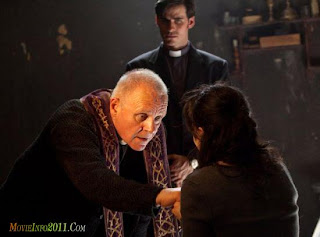 I enjoyed about half of this movie; the first half.  I was not loving it, but I found enough to think that the movie could at least remain solid enough to recommend by the end.  While billed as a horror/thriller, the film felt more like a character drama, with some religious/supernatural overtones.  There was only one “jump scare” and a creepy vibe managed to work its way into the film.  But then things took a turn for the worse.  The story became very cliché, the “jump scares” started to occur more frequently, which only seemed to serve the purpose of keeping you awake, as the pacing of the film slowed to a crawl.
The movie does work decent enough with its actors.  O’Donoghue made for a decent enough lead.  He gets across the problems that his character faces and never seems to stray that far into making dim character decisions, as the film reaches its third act.  Hopkins has a fun way of playing characters, and (this may seem like a stretch, but think about it) if you remember him in The Mask of Zorro, then you know the role he’s playing here – the confident senior/teacher character, at least for the majority of the film.  The final part of the film has him delve into the realm of scene chewery, as he is forced to become a live-wire and antagonizing agent of Satan (I hardly find this to be a spoiler by the way, as the ads and basic movie logic reveal this turn in the story).

Father Lucas:  You can only defeat it, when you believe in it. 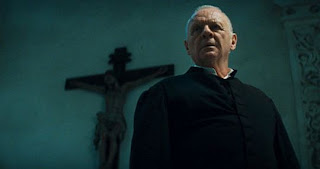 This leads to my main problem with the movie – the film presents a world where all of the religious elements are an absolute.  The film is telling you that, without a doubt, the devil is possessing people, and Michael is clearly wrong in being a skeptic.  That all of the possessions are real is fine with me, but it is the fact that the movie does not try to hide it at all and never presents Michael’s side in a fair manner, which is where the film loses me.  Mixed with the over-the-top final act of this film, it is the story (which is, as the film claims, “inspired by true events”) that collapses what the rest of the flick has to offer.
Still, I did like a lot of things in this film, particularly Hopkins, because he has a natural charisma and excels at delivering his lines and various character qualities.  Even if he is slumming it here, he does a damn good job, and one that is better than other great actors stuck in mid-level movies.  The film is also shot fairly well and does a good job in particular with the first few exorcism sequences.  Director Mikael Hafstrom, who previously made 1408, a more decent thriller, seems to have some good ideas in mind for how to make this film look effective enough, but there are still problems abound when it comes to pacing it well enough and having the story seem less ludicrous than it grows into being, despite how subdued the film may seem to be playing it. 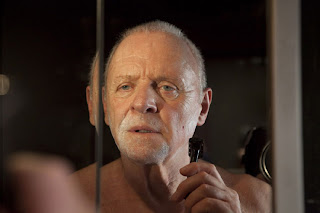 While not the worst exorcism movie I have seen recently (that easily belongs to last year’s The Last Exorcism), I still did not take away much from this film.  That being said, I went in with pretty low expectations and found some good things in it.  Those expecting a good horror film may be let down if they wanted more than just simple “jump scares”, but those expecting a good performance from Hopkins should be pleased enough, and be able to look past last year’s The Wolfman.

Father Lucas:  It knows you.  It knows all of your sins. 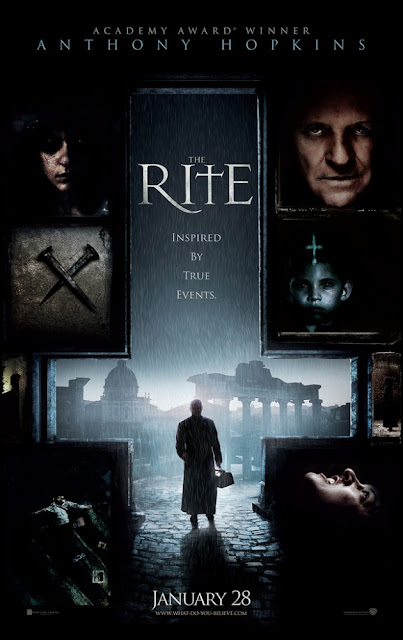