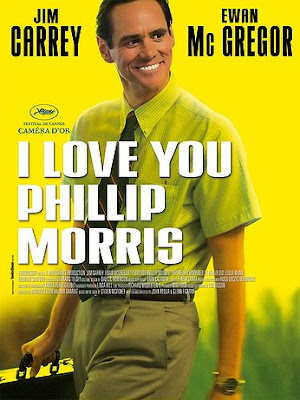 I Love You Phillip Morris:  3 ½ out of 5
Phillip Morris:  You going back to prison again, Stephen?  You promised me we’d always be together.
Stephen Russell:  And I’m keepin’ that promise.  We’ll never be apart.  Never!
To be very matter-of-fact, I Love You Phillip Morris is based on a true story about a gay con artist who managed to escape prison many times and also fell in love with one of his fellow inmates, Phillip Morris.  Despite its seemingly unique premise and presence of Jim Carrey and Ewan McGregor in lead roles, the film has been bouncing around for a couple years, trying to find a U.S. distributor.  The difficulty in this process was likely due to the presence of some explicit sexual content in the film (despite having already been a success in Europe), which tends to throw American marketers the wrong way.  Fortunately, this film was picked up, which is great, because this is a fun film and features two strong lead performances.

The film begins with having us learn about Stephen Russell, played by Jim Carrey.  Starting out in the 1980s, Stephen was once a happily married man, living in Virginia Beach, VA, with his wife Debbie (Leslie Mann) and daughter, working as a cop.  Things are not as perfect as they may seem though, which we find out soon enough; as it is revealed that Stephen is very much a gay man, who enjoys sneaking around with men on the side.  During one fateful night, Stephen gets in a car accident and then decides to live his life more to the fullest.  He declares himself gay, moves to Miami, finds a boyfriend (Rodrigo Santoro) and begins living a very expensive lifestyle.  The need for money causes him to turn to a life as a conman.  When his con work finally starts to catch up with him, Russell is sent to prison, where he meets and falls in love with Phillip Morris (Ewan McGregor).  Stephen, being very good at manipulating situations, spends the rest of the film doing whatever he can to keep himself out of prison and spend all his time trying to be together with Phillip.

Based on the book, I Love You Phillip Morris: A True Story of Life, Love, and Prison Breaks, which chronicles the real life events of Stephen Russell, the film was written and directed by Glenn Ficarra and John Requa, the duo behind Bad Santa.  However, despite the way some of this subject matter may sound, the film does not really play like a dark comedy.  It is actually quite cheery throughout.  Especially given Stephen’s narration throughout, the film seems much more like a sunny recounting of one’s life and his romantic entanglement.  The film does mix in some moments of drama, which tends to upset the tone of the film a bit, but for the most part, things seem move along fairly straightforward. 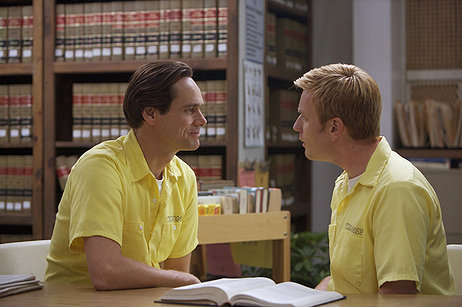 The film certainly has fun with the con artist element, as we see Stephen do many different things to get himself out of situations or manipulate his way into getting whatever he wants for Stephen and himself.  Given that all of the prison escapes depicted are actually based off of true events, let alone the way Stephen poses as both a lawyer and a chief financial officer, the film’s possible struggle at maintaining believability is only helped by its opening note:  “This actually happened.  It really did.”
The highlights of the film are its two lead performances.  Jim Carrey is great here.  He puts in the right amount of both likability and mischievousness to pull off exactly what is needed for this character.  Of course, the abilities he has as a physical comedian only further enhance the places that he can take this character for the better.  I have admired Carrey’s work as both a great comedian and a solid dramatic actor, and this film gives him a chance to blend both aspects together quite well.  There is a complexity to Stephen, as a character, that the film is less about actually explaining and more about letting the dialogue and actions that he takes make it come across on another level.  Without going to deep into explaining what I believe Stephen is all about, there are a lot of layers of this person, which I think will be unfortunately overlooked by many who see this film. 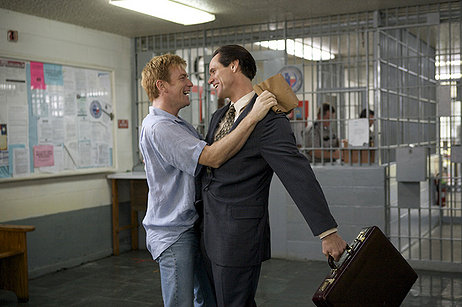 Ewan McGregor is also great here, possibly doing his best work in years (although people should really check out 2010’s The Ghost Writer).  He plays the more effeminate of the pair, working with his southern accent and blonde hair to create a character that clearly has deep feelings for Stephen, despite begin fooled by his true nature constantly.  It also helps that the mannerisms McGregor imbues the Phillip Morris character with are incredibly sublte, but quite humorous.  It is a credit to both of these actors that they handle the relationship aspect of these characters very well.  It is not about how gay they can play these roles, but how well their chemistry together plays out.
If there is anything holding back this film, it is the overall tone and what to get from it.  Despite being told in a very straightforward manner, as I have mentioned, the film does go back and forth between how far or how raunchy it wants to take its comedic elements, before settling back into how emotional it wants to make the romantic element.  This did not bother me too much, as the performances by Carrey and McGregor had me looking past this aspect mostly throughout, but it is an issue that the film does not quite get past in retrospect.  It also slows down considerably before the end. 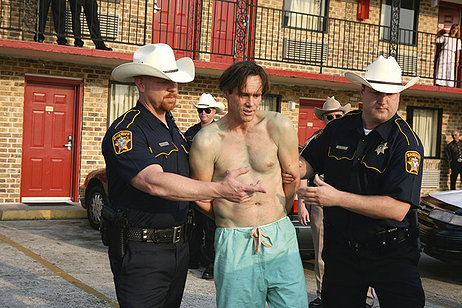 Still, as far as having a different sort of comedy that features two leads in fun and brave performances, this film certainly satisfies those requirements.  There are a lot of things to like about this movie.  I did not get into the con artist aspect too much, but suffice it to say that seeing a person specializing in this role is always quite fun, especially after witnessing the lengths Stephen goes to in order to get out of prison.  And he does so in the name of love of all things…and boredom…and greed.

Stephen Russell:  Honey, I know you’re upset, but we love each other. 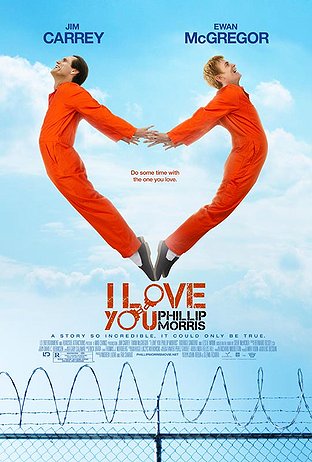