Find ‘The Way Back’ To An Old Fashioned Adventure Story 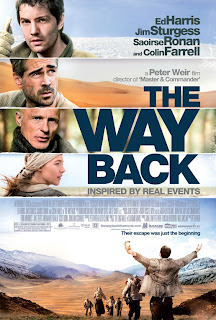 Janusz:  I have to get back.

Given that The Way Back has had practically no marketing going for it, despite opening in several hundred theaters this weekend, I should probably explain what it is pretty quickly.  This is a film, based on a true story, about a group of men escaping a Siberian prison, during World War II, and walking a 4,000 mile journey over mountains, through Mongolia, and across the Gobi Desert, in an effort to reach India and, in essence, freedom.  Filmed on location, the movie is incredibly well shot and features two particularly great performances.  While watching the film can sometimes be arduous, just as the circumstances were for these men, it certainly offers enough to be seen from a story that is fairly simple.
The film’s main lead is Janusz, played by Jim Sturgess (Across the Universe, 21).  Janusz has been accused of being a polish spy, taken away from his wife (who was forced to lie about him), and placed in a gulag, in Siberia.  We soon meet two key prisoners, including Mr. Smith, played by Ed Harris, an American prisoner, who has clearly learned to survive a tough setting.  The other is Valka, played by Colin Ferrell, a Russian prisoner, who has grown up as a thief and street rat, now finding himself as one of the toughest members of the gulag, as he intimidates others with his own knife.  As Janusz has no desire to remain in this terrible place, he quickly considers escape, an option described to him by another prisoner, Khabarov (played by Mark Strong, in a small role).  Along with Mr. Smith, a few others, and Valka (through some threats), Janusz manages to escape the gulag and head south. 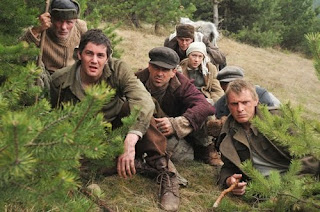 At this point, the film settles into its journey.  With the escapees heading south, towards India, it means marching across vast deserts and through freezing snow.  The men face many different forms of wilderness, each providing them with a new complication.  Each man is faced with the same problem:  lack of food, lack of water, freezing weather, hot weather, dry weather, night blindness, exhaustion, and other spirit crushing obstacles.  During this journey, the men also encounter a young girl, Irena (Saoirse Ronan, of Atonement), who has also escaped hardships and joins the men on their journey.  While the men believe she could slow them down, there are plenty of other elements hindering them on their march towards freedom.

The film was directed by the very talented Peter Weir (The Truman Show, Dead Poets Society).  It is his first film in 8 years, since Master and Commander: the Far Side of the World (a very good film).  For this film, Weir has produced a story that is presented fairly straightforward, albeit with a focus on letting the viewer know how hard the journey was.  Still, the film does not have much complexity to it and serves as a story that could have been made at any real point in time.  This is why the film had difficulty finding a distributor, as it was deemed “old fashioned”, which is apparently equivalent to non-commercial.  That is a shame, because I really did enjoy a lot of what this film had to offer.
First off, the movie is gorgeous to look at.  Reportedly shot in various locations such as Bulgaria, Morocco, India, and Pakistan; cinematographer Russell Boyd does a fantastic job at capturing a sense of scope that makes these men look pretty insignificant compared to the surroundings that they face.  The way the desert terrain, in particular, is captured makes the journey seem all the more difficult, as we see the toll it takes on these men. 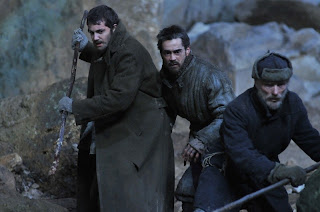 Next, Ed Harris and Colin Ferrell are great in this movie.  I do not think Harris has ever let me down in a performance.  The man has a sense around him that denotes experienced, which makes for a strong character in this film.  He plays a man that has got by in harsh settings, but also gets some signs of inner redemption as he opens up a bit to the Irena character.  We only learn so much about him, but it is enough.  Ferrell, on the other hand, is quite good as the rascally, but also deadly thief, who provides some relief as well.  It is in these smaller movies (In Bruges is an amazing example of this) and some supporting roles that Ferrell always seems to shine in, and he does so again here.  A final scene involving this character is particularly memorable. 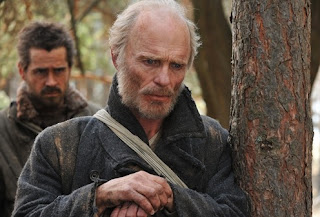 As far as the rest of the cast goes, they are just fine.  It is essentially the hardship that this movie faces.  While the film does not need to draw out each of the 6 men that we are traveling with, they did become somewhat interchangeable.  That being said, Sturgess may have been a fairly uncomplicated leader of the group (he is determined to go home and has wilderness experience), but he does well in the role and as an actor, certainly challenges himself.  And Ronan is good enough as the young girl character, even if she does basically blend in with the rest of the guys after being introduced and delivering her backstory. 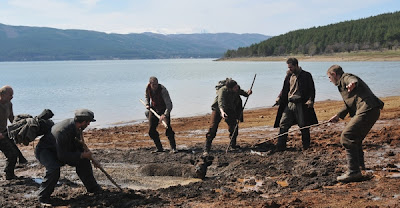 There is a good film here.  It looks fantastic, tells a simple, but heroic journey about men reaching their freedom, and has a couple strong performances.  There is also a solid, but not too intrusive score by Burkhard Dallwitz as well, which I quite enjoyed.  While the film is in fairly limited release, it is certainly worth the time to see on a large screen.  Clocking in at a little over two hours, one may feel a bit roughed up as they follow these men across a sizable portion of Asia, but it is a journey worth taking.

[The men are eating a snake]
Tomasz:  It tastes like chicken.
Voss:  Yeah, a big, black, poisonous chicken, with no legs. 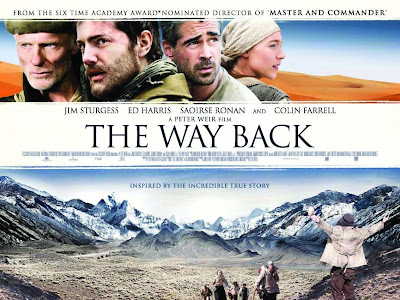