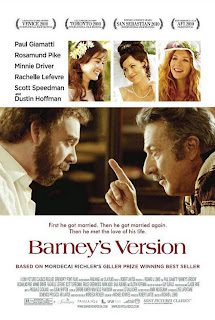 Barney:  Have I ever given up, when it comes to you?
Miriam:  Never.
Barney:  So what makes you think I’m gonna start now?

Barney’s Version is a comedic drama, based on a very popular and prize winning Canadian novel, by Mordecai Richler.  The film stars Paul Giamatti, in a fantastic performance, as a man who has led an interesting life, which we follow through several decades.  The film boasts a solid supporting cast as well and manages to be a very entertaining picture throughout, as we see Giamatti’s character deal with the challenges he has faced, mainly involving his multiple marriages.  While I could pick more of this film apart, based on what I have heard about the structure of the novel, the fact is that I really enjoyed watching this film, and it is on that merit that I would easily praise what it has to offer.
Giamatti stars as Barney Panofsky, a Canadian Jew, much angrier than the average Canadian.  The film begins with Barney, alone in his home, smoking cigars, drinking whiskey, and prank-calling the husband of his ex-wife.  We soon learn that Barney has done very well professionally, by serving as a producer to a hokey Canadian soap opera, O’Malley of the North, but seems to only be close with his daughter.  The film then settles into a mode of taking us through various chapters in Barney’s life, from the 70s onward.  It is during this period that Barney met his three wives. 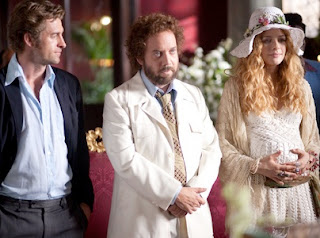 Barney’s first wife, Clara (Rachel Lafevre), came about due to the fact that he got her pregnant during a stay with his buddies in Rome.  His second wife, played by Minnie Driver, is a Jewish American princess, who is certainly a looker, but was really only a rich, trophy wife (as well as shallow and annoying).  The third wife, and most important to Barney, is Miriam (Rosamund Pike), who Barney actually meets at his second wedding and falls head over heels in love with instantly.

Barney:  I’m divorced.
Miriam:  Is the ink even dry yet?
Barney:  Let me check.

Amid these supposed “loves of Barney’s life”, various friends and family factor into the story of Barney’s life as well.  Among them include Boogie, played by Scott Speedman, an accomplished writer who is also a drug addict.  Despite hard times however, Boogie always seems to have Barney’s back, as he proclaims, “I’ll always come to your weddings.”  The other important figure is Barney’s father, Izzy (Dustin Hoffman), a retired cop who shares a very warm relationship with his son.  Along with the various romantic entanglements that Barney gets himself into, he reflects on other aspects of his life as well, such as those relationships with Boogie and Izzy and an unsolved murder mystery. 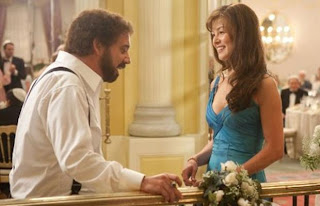 What I enjoyed the most in this movie is Paul Giamatti.  Dustin Hoffman is a very close second and I will talk about him soon, but Giamatti is absolutely great in this role.  This character matches up with all of the talents that Giamatti is able to excel at for this type of character.  He is humorous but sharp and blunt with people; a likable character, while also mean in ways.  Seeing this character through a good thirty years of his life certainly paints a picture that Giamatti has a wonderful hand in creating.  I have felt for a while now that Giamatti has somehow straddled the line as a very successful actor, but yet very underrated.  While very good in wider known films such as Sideways and Cinderella Man, and the acclaimed HBO miniseries John Adams, he has knocked out a lot of performances in smaller films such as American Splendor (rent it) and 2010’s vastly underseen Cold Souls (rent that too).  While this year may be very crowded with other great performances as well, I can only hope that his work here won’t go unacknowledged. 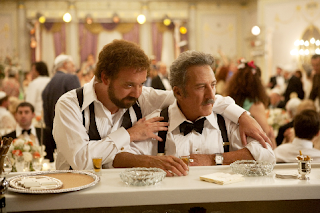 As far as the supporting characters go, Dustin Hoffman is easily the highlight.  Playing a role that is actually much more subdued than some of his recent performances (almost making me forget that he was brought in for re-shoots on Little Fockers to spice up that “comedy”), Hoffman is great in this role and a perfect fit for being the father to Barney.  He is warm, funny, caring, and also hilariously inappropriate at times.  He also has the best conversations with Barney in this film.  Also good is Scott Speedman as Boogie.  Not an actor I have been watching much, but he is very likable here.  Then you have the women, and while Rosamund Pike is the most important, I honestly enjoyed Minnie Driver the most as Barney’s second wife (who goes nameless in this film).  She brings the right kind of comedic touches to what is required of her character. 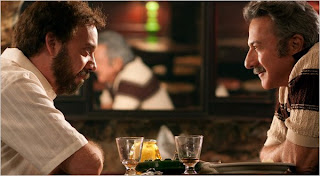 As I have not read the popular novel that this film is based on, my criticism only stems from after knowing how that book is structured, after having seen the film.  The narrative in the novel has a much more intriguing setup, which is not present in this film (but would be of great difficulty to try and accomplish).  Now, I cannot deride a film based on this fact, and I actually have much praise for screenwriter Michael Konyves, who found a way to strip what is a long and involved story down to more of its essentials.  This creates a film that clocks in at just over two hours, as opposed to a much longer version, and feels just right by the end, in terms of its pacing.  That being said, there are elements that falter the film only slightly for me.  It does meander a bit and the film heavily features times when Barney is at his worst (he is a hard drinking, hard smoking, hockey fanatic after all), as opposed to doing more justice to some of the big, bright moments during his lifetime.  The balance does feel a bit off, but I am so enthusiastic about some of these performances that it does not really matter that much. 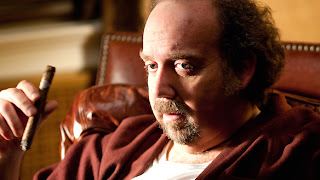 Barney’s Version is a very fine film.  Paul Giamatti and Dustin Hoffman do great work here.  While it goes through many of the same notions that many films like these have, as it is simply about life, it does it well.  It is a well assembled picture, flows nicely throughout, has a lot of funny moments, as well as some well handled dramatic points.  It is not opening to a large number of theaters, but if you see it around, try and catch it.

Miriam:  How can I trust you?
Barney:  I would do anything for you, Miriam.
Miriam:  Don’t answer “anything”.  Life’s real. It’s made up of little things; minutes, hours, naps, errands, routine, and it has to be enough. 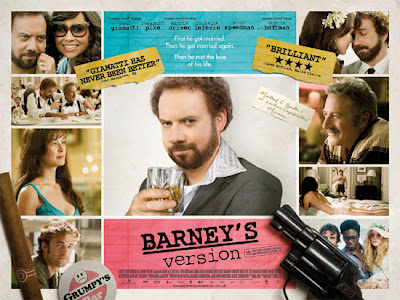