Casino Jack is a fact-based biopic that deals with lobbyists, finance, and the shameless fleecing of the American taxpayer.  It is also quite funny, as leads Kevin Spacey and Barry Pepper essentially sleaze their way through this story as real life lobbyists and businessmen Jack Abramoff and Michael Scanlon.  The film hits a lot of the familiar beats of a biopic and may not be as intriguing as it could be to those more informed on the subject matter, but that does not stop this film from having an entertaining rhythm held throughout.  This is all mainly thanks to the film’s casting and director George Hickenlooper’s (sadly deceased) ability to put together an entertaining feature, while still injecting tons of information throughout.
In the film, Spacey’s Jack Abramoff character is a well-connected, Washington D.C. lobbyist looking to acquire all he can to become a big success and have lots of money.  Abramoff is an affectionate family man and has desires to provide for both his family and the community, as he states so often, but really, he is looking to make lots of money, and he also really enjoys having the attention.  With his business partner, Michael Scanlon, played by Barry Pepper, the two manage to engage in various acts of fraud and conspiracy involving Indian casinos, among other crimes, which leads to more success.
Abramoff also decides to use a buddy of his, sleazy salesman Adam Kidan, played by Jon Lovitz, to help head one of the illegal schemes he has setup involving cruise ship casinos.  Unfortunately, among other problems, Kidan’s mob connections eventually make for worse circumstances, as various scandals become more and more obvious to the rest of the world.  In addition to problems involving Kidan, elements, such as the basic cockiness of Scanlon, soon become destructive forces for Abramaoff’s ill gotten fortunes.
The best things about this movie are the performances by Spacey and Pepper.  Spacey is in top form here, despite playing another real life character he shares little physical resemblance to (Spacey also portrayed Bobby Darin in Beyond the Sea and Ron Klain in Recount).  The work Spacey does as Abramoff is very good, managing to make a character, who we know is participating in various illegal deeds, incredibly watchable and at times very likable.  He has a way of addressing people, mixed with the overall convictions he tries to convey that works quite well for selling this role.  Pepper certainly has the showier role, with his Scanlon character acting out much more, flaunting his status and having a great ego about it.  These two work well together and with the other members of the cast separately.
The film’s supporting performances are good enough as well.  Lovitz manages to do an effective job in the sleazy role (not surprising), but also manages to make it effectively funny without coming off as too goofy (as far as a Jon Lovitz performance goes, anyway).  Kelly Preston also stars as Abramoff’s wife, Pam, always willing to stick by her husband, despite her concerns.  And Maury Chaykin (also recently passed away) has a role as one of Kidan’s mob associates.
While I did find this film to be enjoyable, I think its biggest problem is that it does not present itself as one with a broad appeal.  The narrative follows the path of a biopic very clearly, but the motivations and messages of the film are all very politics heavy, which is not necessarily a bad thing, but can certainly alienate viewers that cannot quite get around some of the more technically involved scenes concerning the exact dealings that Abramoff and co. are participating in.  I also believe that the movie does function well as a comedic drama, but in between the many moments of levity, the true nature of the crimes committed does not quite come across as effective as they could have.  The film does less to show me a dramatic punch than has me relying on my understanding of what is going on and why it is not right or why the schemes that occurred should be stopped.
Despite some of these gripes, however, the movie still works fine as an entertaining depiction of a corruption scandal from the recent past.  The performances are well thought out, essentially giving us the likable scoundrel film we desire.  This is a nice change in pace from seeing the more serious set of biopics that tend to come out around this time of the year.  The film works well as an interesting and consistently humorous portrait of an ambitious, but morally confounding man; and the best part is, as Spacey’s wonderful character explains near the end of the film, he does not even understand why it is that he is in the wrong.

Jack Abramoff:  Next to God, faith, and country, nothing is more important than influence. 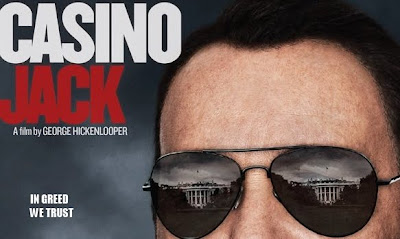