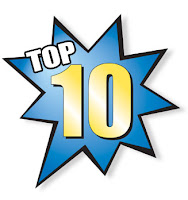 It’s the end of 2010, and with that I have a list of my favorite movies.  The following list contains all of the films that I felt defined what I seek out in most films; namely that they have elements of entertainment, intrigue, or master craftsmanship when it comes to the filmmaking.  Some may only have a few of these aspects covered, others may have all three bases dominated.  Given my lengthy honorable mention section, there were certainly a good number of films that I had to choose from, but this list, I feel, represents the best of what 2010 had to offer theatrically:

10.  The Girl with the Dragon Tattoo - The first film of a trilogy, adapted from a book series that became mega popular over the course of this year.  This film was a strong entry as far as crime thrillers go, made great by the breakout performance by Noomi Rapace, who played the titular “girl with the dragon tattoo” of the series.  Certainly a film dealing with dark subject matter, but well made and delivered nonetheless.  With David Fincher currently filming the American remake (due next Christmas), it will be interesting to see how that film matches up with this great one.

“I’ve never done this before.  Hold still or it’ll get messy.”

9.  127 Hours - Director Danny Boyle managed to follow up his Oscar winning Slumdog Millionare with a great story about triumph.  Boyle managed to combine his wonderfully kinetic style with a story that mostly takes place in one location and made it one of the tensest experiences of the year.  Beyond “the scene”, this film is wonderfully well made with a pretty fantastic lead performance by James Franco.

“All you have to remember is that everything will be okay.”

8.  Kick Ass - It is impressive that this film managed to live up to its title in so many ways.  Adapted from the Mark Millar comic, this was the little film that could, as it was independently financed, but still managed to wow audiences with its slick action sequences; most notably the violent ones involving 12-year-old Chloe Moretz as Hit-Girl.  Add to that a fun story about a high school kid attempting become a superhero and the wild card that is Nic Cage and you have a pretty fantastic comic book movie.

“Tool up honey bunny.  It’s time to get bad guys.”

7.  The Kids are All Right - With all the big spectacle films that came out over the summer, I really fell in love with this film as well.  It has great performances from Annette Bening, Julianne Moore, and Mark Ruffalo, who are all well equipped to match the roles they’ve been given.  The film is very funny, with the all the right kind of dialogue that is sharp, witty, and perfectly suited to the story.  All of these great elements lend themselves to a film that will easily earn repeat visits for me.

“To an unconventional family.”

6.  True Grit - All of the ingredients were in the right place for this one.  A Coen brother’s western, starring Jeff Bridges, Matt Damon, and Josh Brolin, which features all of the elements that make their films so enjoyable.  The film has great, funny, quirky and authentic dialogue and plenty of dark humor to match the western violence.  Definitely adding to this film’s greatness is its accessibility to audiences.  That is not a factor you can really associate to many Coen films, but True Grit certainly delivers a very satisfying viewing experience.

“Fill your hands, you son of a bitch!”

5.  Toy Story 3 - I have said this many times, but when Toy Story 3 came out, after Wall-E and Up, I was expecting a fun comedy starring some old friends.  This aspect was certainly delivered to me, but I did not expect the roller coaster of emotions that the entire film would put me through, as the story beats led to various moments of cleverness, suspense, and past reflection.  Any movie could make me laugh very hard and also worry about the safety of Mr. Potato Head is one that deserves high recognition.  Pixar scores a hit again, here’s hoping they pull off Cars 2.

“You’ve got a play date with destiny.”

4.  Black Swan - I love the idea that I was able to fall in love with the concept of Natalie Portman going insane.  This movie certainly gave me that, delivering on its seemingly simple premise, which basically functions as a twisted take on Swan Lake.  The end result is a terrifically terrifying ballet drama.  Director Darren Aronofsky certainly delivered on establishing a mood and a creating a film that was very much a visual feast when it came to delving into Portman’s psyche.  The final act of this film, in particular, is a tour-de-force.  Add to that Portman delivering one of the best performances of the year, and you have a film that easily belongs high on my list.

“What happened to my sweet girl?”

3.  Inception - Now we enter that top tier of 2010 films that I really love, starting with this Christopher Nolan directed, mind-bending, summer blockbuster.  What many were first thinking would be a nice cool down for Nolan, in between Batman films, turned out to be a grand-scale sci-fi/action epic, with a large and very talented ensemble cast, and a plethora of amazingly filmed sequences.  Between the spinning hotel hallway fight and Ellen Page’s character literally bending the world backwards, I found much to love in this film, and it all starts with Hans Zimmer’s booming score.  Bwarrrrrr! Bwarrrrrr!

“The dream is collapsing.”

2.  The Social Network - Here’s another film that was absorbing and action packed…with dialogue, heyo! David Fincher once again delivers a fantastically made film that may not have screamed “Fincher” when first bringing up the subject of “Facebook:  The Movie” but certainly fits very well into his filmography.  Masterfully crafted, the obvious benefit to a movie like this is having a screenplay written by Aaron Sorkin, who manages to cram this film with great dialogue, all functioning to tell a story about ambition, friendship, and betrayal.  This is a film that works as a drama, a sly comedy, and a solid reflection on a generation still in progress.

1.  Scott Pilgrim vs. the World - Anyone who knows me or has been reading up on what I have to say should have probably seen this coming.  I have seen this film more times in theaters than any other film this year, let alone the past few years (although Inglourious Basterds was close).  I have done everything I can to get the word out on this epic epic of epicness.  Based on an equally brilliant comic, director Edgar Wright has made one of the ultimate hybrid films, which is essentially a romantic comedy but manages to be both:  hilarious and full of some pretty kick ass action sequences.  Add to that Wright’s ingenious visual style, which perfectly fits the tone of the film, as it heavily references video games and the indie rock music scene.  In a year that ended up being full of lots of good films to choose from, this was the one that managed to be both one of the best made films of the year and the film I had the most fun watching.

“We are Sex Bob-Omb and we are here to make you think about death and get sad and stuff.”

Honorable Mentions:
The King’s Speech, The Fighter, Animal Kingdom, The Good The Bad and The Weird, The Ghost Writer, A Prophet, Splice, Shutter Island, The Town, Micmacs, Cyrus, Buried, Let Me In, Hereafter, Restrepo, Exit Through the Gift Shop, McGruber, and of course Piranha 3D