Tamara Drewe Gets Around, and Has Fun

Of all the films adapted from graphic novels released this year, Tamara Drewe will probably be the one met with the least amount of fanfare.  Despite being based on a very popular British comic strip by Posy Simmonds, it is not one about having a flashy genre premise.  As fun as those films can be (and as much as I enjoy them, e.g. Kick Ass and I think I’ve been clear about my love for Scott Pilgrim) Tamara Drewe is a very enjoyable and sexy contemporary comedy.  The film is full of quick witted dialogue, many interlocking plot threads, and an atmosphere that is very breezy in its presentation.  The action in this comic adaptation comes from the way these characters interact both verbally and romantically.

The film stars Gemma Arterton (stepping away from fantasy epics such as Prince of Persia) as the titular character.  Tamara was once the ugly duckling of the quaint village town, Ewedown, located in the West Country of England, but has now returned as a much desired beauty, thanks to some plastic surgery.  The operation Tamara received, to make her nose much smaller, was also the subject of her own blog, which lead her to become a famed journalist.  By returning home, Tamara’s intentions are to fix up the country home she grew up in and sell it off; however, Tamara’s arrival may also upset the mostly quiet lives of those living in the area.

As Ewedown is a small village town in the English countryside, it has become a place for many to come to in order to seek relaxation.  In particular, the neighboring farm to Tamara’s home is the home of famous novelist Nicholas Hardiment, played by Roger Allam, and his wife Beth, played by Tamsin Greig.  The two of them host a writer’s retreat for people to come and enjoy the quiet setting, while also enjoying Beth’s cooking and advice from Nicholas.  In particular, an American, Glen (Bill Camp), is among those looking to find peace and inspiration, so he can overcome his writer’s block, even while dealing with Nicholas’ apparent pompousness.  Also living in the area is Andy Cobb (Luke Evans), handyman and gardener for the farm and former lover of Tamara’s pre-nose job.  Rounding out this cast living in the area are two bored village teenagers, Casey and Jody (Charlotte Christie and Jessica Barden), who spy on all the village goings-on.
Getting back to the area being upset by Tamara’s presence, it is her way manipulating emotions that puts many of the men around in a state of unease.  Certainly complicating matters is Tamara’s decision to develop a relationship with a wildly self obsessed rock star, Ben Sergeant (Dominic Cooper), who the young girls also happen to be obsessed with.  This decision certainly strikes a chord with Andy, who is helping Tamara remodel her old home, as well as Nicholas, who has done some dilly dallying in the past, and looks to be not changing his way so soon.  Various paths will cross throughout and under different circumstances as feelings are revealed and certain measures are taken.

Andy Cobb:  What do you have to do to get a cup of tea around here?
Tamara Drewe: Make it.
Despite the somewhat long summary, I’ve hardly spoiled much of anything.  Much of the joy in this film comes from the ways in which all these storylines play out, intersecting at different points, and taking fun turns along the way.  While the film is titled Tamara Drewe, the amount of characters present in this film and the ways in which they are driven tend to suggest that no one is truly the lead character.
I guess that’s another aspect of this film that I enjoyed.  One can watch this film and have a good time deciding which character it is that they want to root for or have the most fun with.  If I had to choose now, I would probably want to go along with Glen, the sad sack American who is also smart and witty.  This is certainly the element that best gets across the graphic novel basis, by being able to wander around between different characters and expand upon their arcs.

The film was directed by Stephen Frears, who, despite devoting time to what are ostensibly character comedy/dramas (The Queen, Dangerous Liasons, High Fidelity), manages to jump around from genre to genre with ease.  With this film, he manages to take material that is fairly small in scale, despite being somewhat sprawling in terms of all the characters involved, and balance all of the plot threads quite well.  While not being a director known for a signature style, he manages to retain a sure footing that keeps this film steady and moving at a brisk pace.
A strength that Frears does manage to pull off again is his casting.  As this is a very dialogue heavy and very British film, the cast is full of accomplished British stage actors, among others, who have no problem trading lines with one another.  Starting with Arterton, her Tamara is easily the trickiest role, as we are not entirely sure what her ultimate goal is, as she establishes a different sort of relationship with all the men she encounters.  She is aware of the beauty she now possesses, but seems to be seeking the attraction of others as opposed to actually being able to settle down with someone.  The rest of the characters, while not one-sided, have to both play at being effective characters, while also almost representing a caricature in some sort of way.  You have the handsome, rural farmer, the rock star, a teenage girl, etc.; all of these characters function as a specific role.  Of these, I would say that the best work comes, once again from the American, Glen, as played by Camp, but also great work from Allum and Greig as the famous and self-important writer and his long suffering wife.

The film only suffers in the usual sort of way for one such as this.  While I am mostly fine with the way it balances all of the characters, I think it is apparent that material must have been cut in order to keep a good enough pace to the film.  As a result, while you certainly have a sense for who everyone is, some more fleshing out could have benefited some individually.  The other factor that is a result of the sprawling sense of characters is the chaotic way in which the ending plays out.  It makes sense, as each of these plot strands need to come to a head, but the events feel a bit more due to the constraints of this being a film as opposed to being a natural sort of end.
Still, what is most important is how breezy and enjoyable the film is.  It works as a solid, contemporary comedy.  Gemma Arterton is a very likable actress in the title role.  The film, which is based around dialogue, does a great job at providing scenes full of witty exchanges.  It may not be one of the more exciting films of this year, but it is certainly very charming…and features cows!
Andy Cobb:  Marriage…remind me never to try it.
Zoe:  Andy, you’re just a sex object.  No one would have you. 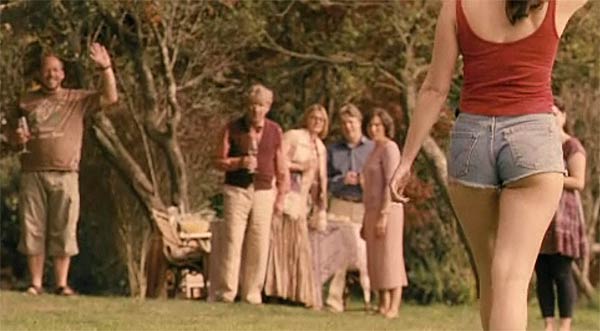