The Red Riding Trilogy is an Ambitious Crime Saga 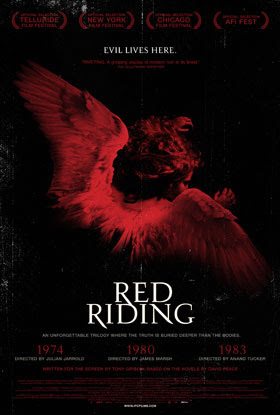 Peter Hunter: You don't like the police much, do you?
Martin Laws: No love lost, no.
Peter Hunter: So when someone kicks down your front door, kills the dog and rapes the wife, who you gonna call?
Martin Laws: Well it certainly wouldn't be the West Yorkshire Police - they'd already *be* in there, wouldn't they!

A trilogy of films set against a backdrop of serial murders, including the Yorkshire Ripper case. While they are each standalone films, handled by different directors, they share the same setting and feature some of the same characters and themes throughout. I could review each of these films separately, but this film project was ambitious enough to warrant my viewing of them in quick succession of each other, and in doing so I feel that it would be best to sum up my thoughts in one review.


The films are set in 1973, 1980, and 1983. The first film features Andrew Garfield (future Spider-Man) as a journalist looking into the unsolved murders of several young girls. During his investigation he makes encounters with the mother of one of the victims (Rebecca Hall) and a corrupt businessman (Sean Bean). In 1980, Paddy Considine stars as a police officer brought in to investigate the Ripper murders. In this film, the focus moves towards corruption from within the police department. The final film focuses on the redemption of some of the characters and wraps up many of the running plot lines. It also features Mark Addy as a public solicitor looking into the past abductions. This final film relies the most on the previous films, utilizing many flashbacks, but still functions as a solid standalone feature.

The three films were directed by Anand Tucker, James Marsh and Julian Jarrold. Each of them have distinct visual styles for their films, which is fitting with the time frame that these films are set, as the quality becomes better and better. 1973 is filmed with 16mm film, giving it the grittiest feel of the three, while 1983 was filmed with the Red Camera, making it the cleanest. This approach again adds to keeping these films separate as features, while feeling appropriate to their tone.

This trilogy as been frequently compared to David Fincher's Zodiac, which is apt. Both these films and that one are sprawling crime sagas that maintain a dark tone throughout and feature many characters and plot lines. While Zodiac is the better feature, this trilogy sure does manage to ring very true in the same ways, by featuring a solid set of stories, focused more on what the events cost these characters in their own lives and the procedural elements surrounding their stories.

Certainly aiding these films are its performances. Garfield does a solid job, even if much of his job requires having his ass kicked for probing to deep. Bean is at his sleazy best. Rebecca Hall does quite well in one of the smaller roles, as does Peter Mullan (an actor I admire). David Morrissey does a fine job, being the one actor to have a fairly important role in all three features.

In terms of ranking these films, I am actually having a fairly indifferent feeling towards which one is the best, but if I had to choose, I would say the second feature, 1980, is the best conceived. 1974 certainly relishes the most in it's style and 1983 is about concluding the series, but 80 seems to be the one I would come back to most easily.

The dark tone of these features can certainly hold one back from getting the most out of them. It takes a bit of time to really embrace what is going on, and the thick Yorkshire accents certainly didn't an American like me get deeper involved at a quicker point.

This is certainly a series I have high praise for. It was an ambitious project that certainly paid off. A unique film series that benefited from the approach to its scope.